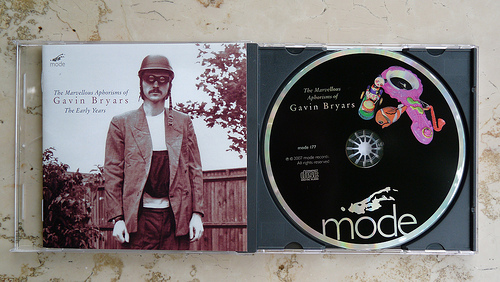 The word aphorism (literally “distinction” or “definition”, from the Greek: φορισμός, aphorismós ap-horizein “from-to bound”) denotes an original thought, spoken or written in a laconic and easily memorable form.. Wikipedia
Listening to this CD it soon becomes clear that Gavin Bryars, Seth josel and Ulrich Krieger have certainly no shortage of British sense of humor, here we have four compositions, made between 1970 and 1971, on various guitars and ensemble, all of them showing sometimes a little extravagant solutions. The first track, The Squirrel and the Ricketty-Racketty Bridge was originally written for Derek Bailey and included in his Solo Guitar Volume 1, 1971 and subsequently recorded for Oscure Brian Eno in 1978 with enforcing of Bryars, Eno and Fred Frith . The piece is for one guitarist and two guitars or multiples of this and here is performed with electric guitars by Seth josel. He plays an extremely clean version, different from the most rough Bailey’s version, but perhaps putting more in evidence the implacable counterpoint.
“1, 2, 1-2-3-4” of 1971 was also released in an earlier version on Obscure. This is in my opinion the best piece of CDs, about 33 minutes of music on interpolation of the Beatles songs. I am not a fan of the group of Liverpool but I liked a lot this piece! Imagine the presence of two electric guitars with hendrix attitude and acid vision like Jerry Garcia instead of Jerry Harrison and you will find yourself immersed in a colorful and intense trip, familiarity with the pieces will push you now to sing now to ask where you are finished, and the fun is assured.
Premiere recordings for both “Made in Hong Kong” and for Pre-Mediaeval Metrics, the first is piece for a toys for children that provides a number of conditions including that toys have to be given spontaneously by the children and only after that the musician has tell them the specific use that he want to do. The title recalls how the former British colony was in the past (certainly for my generation) the equivalent of what is now the “made in China”. The fourth piece of the CD is based on a couple of sentences arranged in four columns to eight pages, each sentence is composed of four symbols, the instrumentation is also free and each instrument can perform only one sound, all based on rhythm derived from the of poems in Latin. Fifteen minutes of sound almost austere, repetitive, to the limit of the obseessive.
I think this is really a good record, the repertoire is not easy listening but accurately identifies a particular historical moment particularly fruitful for the English experimental music, the recording is excellent and the booklet accompanying the CD is very beautiful and with excellent photos. The musicians? No less than brilliant. For those who were looking to point out that the Mode Records is distributed in Italy by Stradivarius indipendent label.