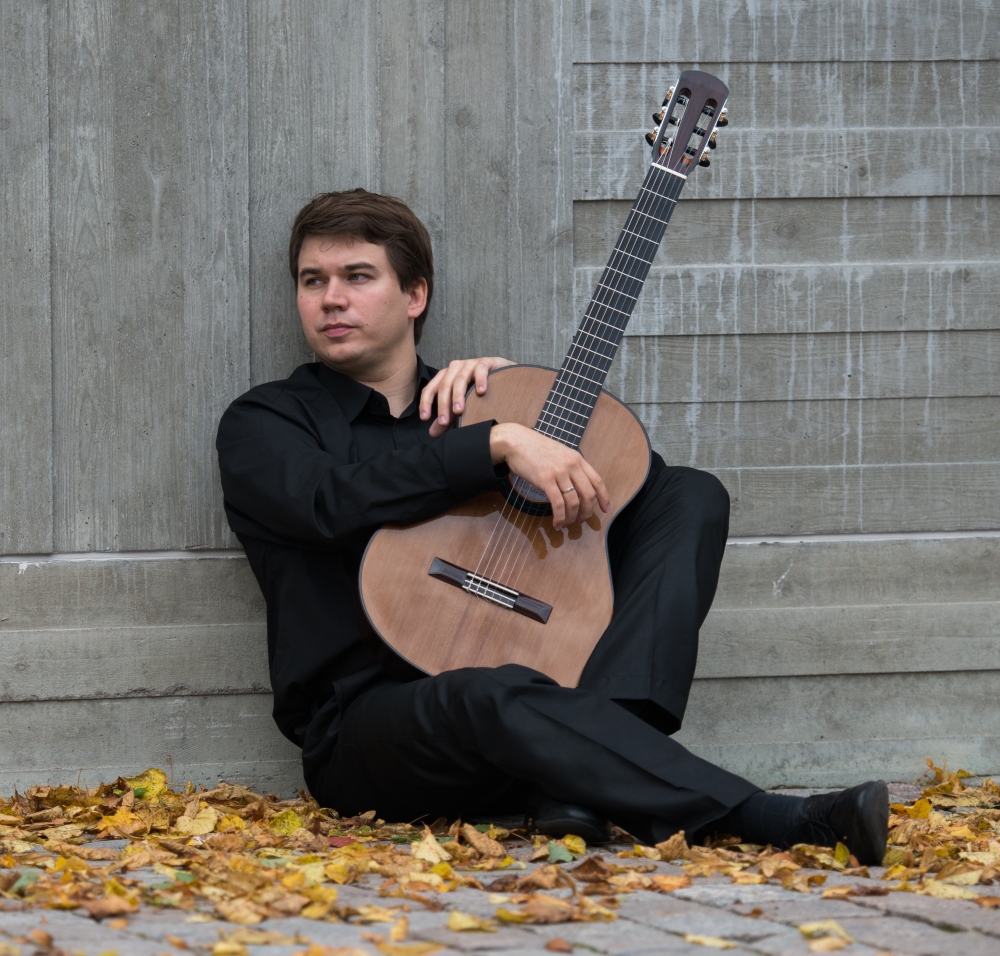 Well, I remember that at home there was a semi-acoustic guitar that my father played a little bit and at our home LPs of Dire Straits and Pink Floyd were played quite often. Obviously those bands had very impressive lead guitar players so the attraction to the guitar came naturally. Actually probably my earliest musical memory is the sound of the high note that starts the intro of Telegraph Road by Dire Straits played through a scratchy LP player. I became interested in classical guitar later in my early teens after playing in bands for a few years. I started the lessons in classical guitar in the local music school at about the age of 12.

I know that you have studied with Timo Korhonen and Oscar Ghiglia, what impressions did they leave to you and to your music?

I’ve had the privilege of studying with very fine musicians like Timo Korhonen, Oscar Ghiglia, Ismo Eskelinen and Massimo Felici among others. I heard Timo’s CD of Spanish guitar classics in the local music library of Valkeakoski when I was a young boy and his playing aroused in me poetic sensitivity together with fierce intensity. His example was crucial for me to abandon the electric guitar and the rock bands. When I went to Siena to study with Oscar Ghiglia in Accademia Musicale Chigiana I had already studied a few years with Timo and Ismo (who also used to study with him). Though I was young I was intuitively able to follow the ideas of Oscar and the things he was speaking about were familiar to me though not consciously so. Many ideas have matured in me for a long time, even until recently.

Massimo Felici came to Turku Music Academy to give a masterclass and concert while I was studying in Turku. His playing of Giuliani finally opened for me Rossini and the Italian bel canto style which I really didn’t get before. I think Nordic people often see just the superficial surface of the Rossini and the Italian bel canto style and cannot just live in the transient moment and enjoy the beauty of it. Massimo Felici also studied with Ghiglia so all my teachers studied with him, and his connection to Segovia is obvious. For me studying with them has been a big cultural experience which I’m hoping to share in my teachings.

I would like to talk with you about your last two records: Perchitarrasola (2012) and Through Green Glass (2015), how do these projects start? How did you know the Italian and finnish composers?

During my years of studying first in Turku (Finland) and later in Italy I was already working with composers who were friends and students at the time. I found it fascinating to work with composers and talk about the concepts of music instead of just talking about the problems of playing the guitar.
Markku Klami and Francesco Maggio were the first composers to write for me and their music is also included in the first cd Perchitarrasola. When I came back to Finland from Italy after a few years of studying at Accademia Musicale Chigiana and Conservatory of Monopoli I had made some connections with Italian composers and musicians. At the time I was taking over the duties of artistic director at Brinkhall Summer Concerts in Turku and a lot of contemporary chamber music was premiered there.
The first cd Perchitarrasola was the summary of the solo guitar works written for me until 2011 by Finnish and Italian composers including works by Ada Gentile, Marcela Pavia, Mauro Porro, Andrea Talmelli, Francesco Maggio and by the Finnish ones Markku Klami, Juha T. Koskinen and Kai Nieminen. The second cd Through Green Glass consists of more recent works (2013-2015) written for me by prominent Finnish composers Mikko Heiniö, Pertti Jalava, Juha T. Koskinen, Kai Nieminen and Harri Suilamo. It has been quite intense and I’ve done more than forty premieres by now. Though the CDs have so far been only contempory music that period is just one part of my musicianship. In concerts I play music from the last 500 years and I just recently bought an early romantic guitar (a copy of Fabricatore made by Italian maker Gioachino Giussani), which has been really inspiring.

You have made both records with Pilfink Records, how did you meet this record label?

Before I contacted Pilfink Records, I had noticed their interesting catalogue of guitar music and contemporary music among others. They were also able to release the first CD quite fast so I was happy to do it since I didn’t have to wait the release of it forever. I think it was natural to release the second album also with them since the program was kind of in part continuation of the concept of the first one, the pieces written for me. The next album will also be published by Pilfink Records in late 2016 and this one will be very different from the previous ones. It’s my arrangement of Schubert’s Die schöne Müllerin song cycle for tenor and guitar.

The concept of improvisation in jazz and then in the so called “classical music” is quite different, of course. In general in the earlier centuries there was more freedom in the concrete execution of notes since the written notation was less strict and left some freedom to musicians to decorate. Of course there’re exceptions like J.S.Bach whose music is so throughly thought in the score.
In my work usually the concept of improvisation has something to do with musical memory. I try to feel the long lines in the music and remember the music as far I can so when a musical gesture (motive, section, dynamics, basically any musical expression) reappears in the music, I remember how I “spoke” it previously and I just try to be creative in expressing it again in the music. The most unmusical thing would be to play it exactly the same! To vary phrasing, dynamics, expression and timing this way keeps the musical speech alive I think. Yes, so it has everything to do with improvisation.

Music is communication and in the music there’re all the time causal connections so when there’s an “error” it should have an effect. Of course if playing a piece by a 19th century composer, for example, I cannot go running on the other side of the fence when this happens! This is an interesting problem and maybe in classical music performance this cannot be explored as much as in some other “genres”. Composers deal with this all the time though. 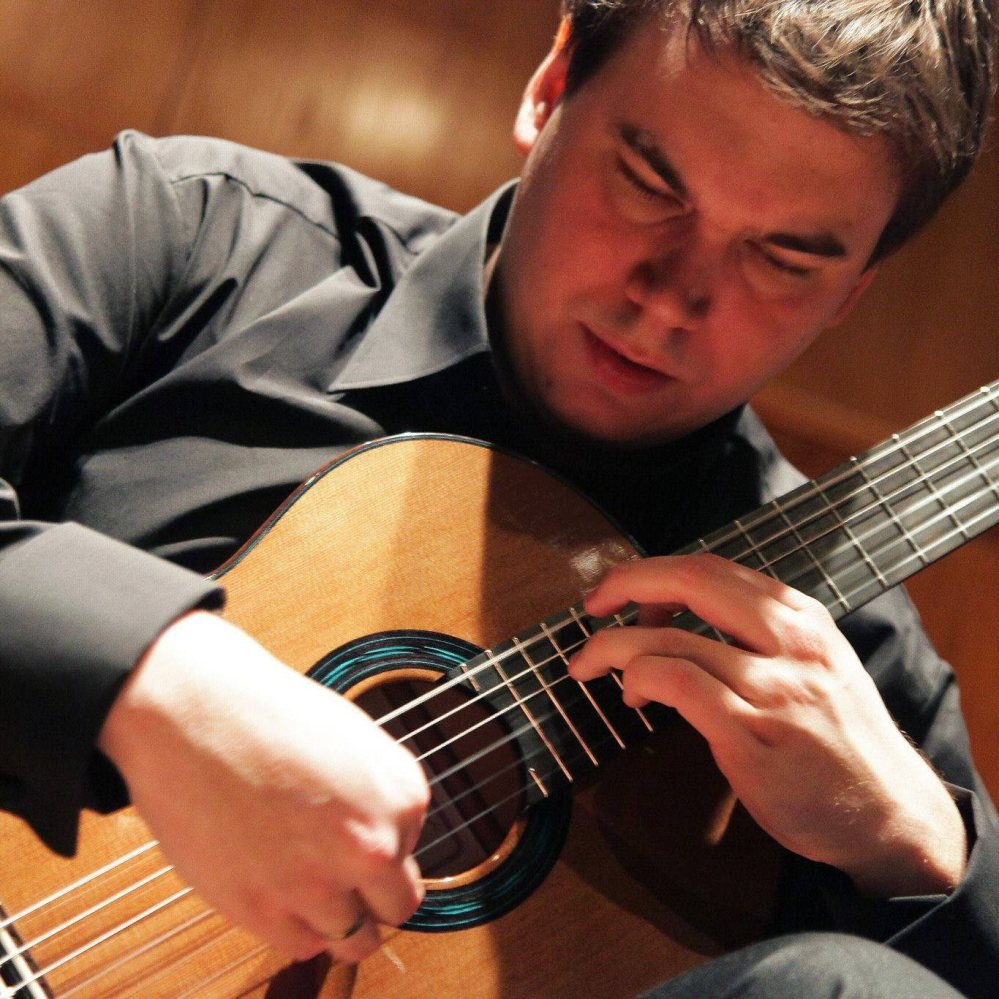 Please tell us five essential records, to have always with you .. the classic five discs for the desert island …

I have some favourite pianists whose music making is just so sublime and when they play the instrument just disappears and one is just left with the musical ideas. Radu Lupu’s Schubert is so naturally beautiful and very touching, just like everything he’s done. Claudio Arrau’s sound palette is so multidimensional and clear that there’s always something to learn. I really like his Liszt and Chopin.
Shura Cherkassky is another favourite one. So if there’re already three recordings I could take, maybe J.S.Bach’s B minor mass and some Stravinsky’s orchestral music, no particular recordings of them in my mind right now.

Too difficult to answer of course. This summer I have finally decided to learn the Nocturnal by Britten, so that could be on the list. If we stay on the guitar repertoire let’s add there 12 Studies by Villa-Lobos, I love Fernando Sor so there’s his Fantaisie Elegiaque, there was a time when I used to play a lot of Takemitsu so In the Woods could be there. The last one would be the piece that has not yet been written for me…

With who would you like to play? What kind of music do you listen to usually?

I have played more and more chamber music recently and it’s very healthy for a musician and it’s great fun. On the last two Turku Guitar Festival’s, where I’m artistic director, there have been collaboration concerts with Turku Philharmonic with really varied programs with Castelnuovo-Tedesco, Boccherini and Kernis Quintets, Vivaldi concerto, Paganini, Sallinen and so forth.
The question of “desert island discs”maybe gave some hint of what kind of music I like to listen. It’s often connected to the kind of music I’m working on but yes, I like many things in rock music and there’s many great singer-songwriters whose use of the text in otherwise simple music is very nice.

Your next projects? When will we see you playing in Italy again?

In the autumn 2016 there will be Franz Schubert’s Die schöne Müllerin CD release concerts in Finland with tenor Markku Lautjärvi. It’s a great experience to play the whole song cycle for the whole one hour duration without a pause. Rarely does a guitarist have a chance to play such a long piece. My arrangement is loyal to all the original keys of the composition and the variety and subtlety of modulations is something that’s not found in the guitar music of the period. Making the arrangement and the recording has been a huge effort and there haven’t been that many guitar recordings of it since the 70’s when Ragossnig made his version.

On 15th of December 2016 I’ll be playing in Milano in Spazio Tadini in a concert that is part of the concert series of Associazione gli Amici di Musica/Realtà. The concert program concentrates on my latest CD Through Green Glass (Finnish Guitar Music). Around that concert there will be some other concerts and masterclasses in Italy yet to be defined. With London-based Swedish guitarist Martin Fogel I played my duo debut concert at Turku Guitar Festival this spring and there’re now plans for concerts, first in the UK, Finland and Sweden and also making a CD of good old Spanish guitar classics for two guitars. This is something I look forward to. There’s going to be a premiere of the work for solo guitar by Finnish composer Harri Vuori in Helsinki in the summer of 2017. In 2018 I’m invited to Forum für Neue Musik Oberstdorf in Germany with a contemporary music program. I play roughly 20-25 concerts a year.

One of the best things in being a “classical” musician is the variety of styles. Whether it’s contemporary music, Spanish guitar classics, Bach or Schubert. I’m happy to be working on all of them.