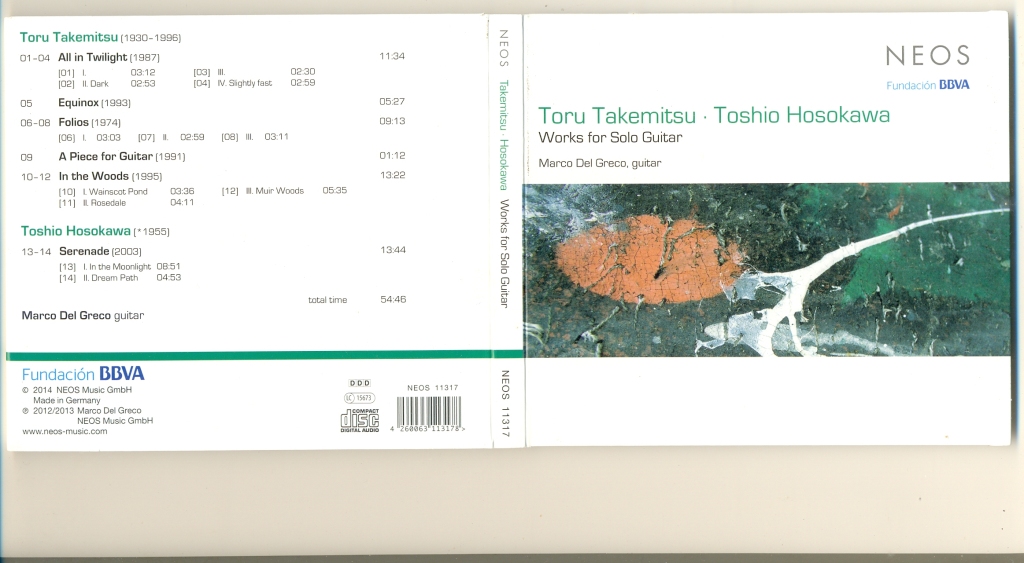 “In Performance” wrote Takemitsu “sound trascends the realm of the personal.” Marco Del Greco, Italian guitarist with a brilliant curriculum, born in 1982, diploma with “mention of honor” with Carlo Carfagna at “S. Cecilia ” Conservatory of Music in Rome, 1st prize in 2010 at the” 53rd Tokyo International Guitar Competition “, manages to make this sense of musical transcendence in his excellent cd Works for solo guitar dedicated with deep respect and great musical skills to the Masters Toro Takemistu and Toshio Hosokawa, probably at this time Takemitsu’s most important and interesting heir.
Takemitsu’s music is well represented by his classic All in Twilight (1987), Equinox (1993), Folios (1974), A Piece for Guitar (1991), In the Woods (1995), while Hosokawa’s musical thought here is represented his Serenade of 2003.
This CD, as rightly stated in the beautiful booklet that accompanies it, is especially significant to grasp the interpenetration of styles and cultures that enliven the musical thought of these two composers, sound and silence, space and void, the “sense of ma”, respect for nature, the perfect balance of tones on the instrument, the use of sound as a pure evocation and creation of a new world and a new musical thought, all these elements emerge, merge and disappear inside Marco del Greco’s guitar . Really an excellent job, clean and well-balanced recording that highlights all tones and the colors of his classical guitar.