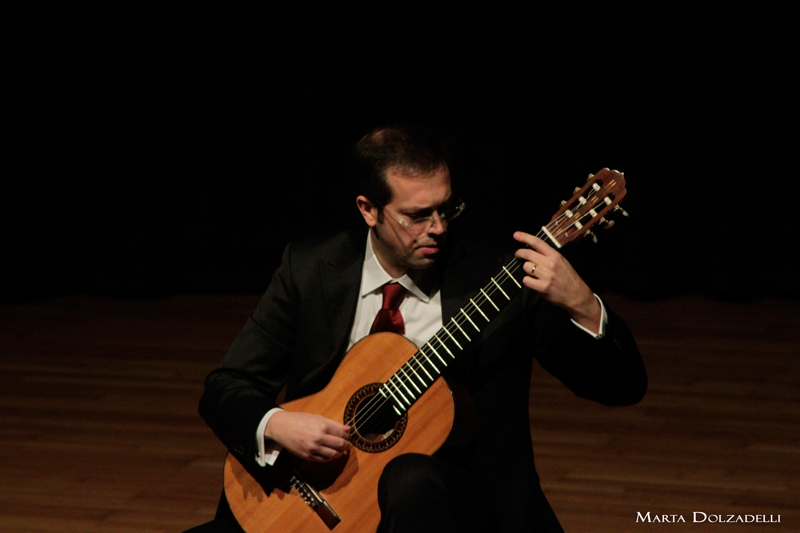 When did you start playing the guitar and why? What did you study and what’s your musical background?

I started studying guitar whe I was 10 years old. We would often listened to classical music at home – not the guitar, though, that it was an almost unknown “classic” instrument. I listened to it for the first time from the hands of a family friend who played it as an amateur. I was very fascinated by the sound of this instrument and I asked my parents a guitar as a birthday present. I studied for three years in a middle school with musical direction. I later attended the Conservatorio”Verdi” in Milan, where I graduated under Paolo Cherici’s guidance, and finally a high level three-year course to the Music Academy in Basel, with Oscar Ghiglia. I also followed some master classes, among whom I would like to recall the Accademia Chigiana in Siena with Oscar Ghiglia and one held by Julian Bream in Florence in 1994.

With that guitar do you play and with what have you played?

With regard to the guitars, I’ve owned many instruments, but the only ones who accompany me for many years in my artistic activities are a Romanillos 1989 and a Moccetti 2003. These are also the only guitar that I used in my recordings. I’ve owned and played in concert Raspagni, Bernabé, Gallinotti and Moccetti guitars.

You’re a musician very interested in contemporary music, personally I really appreciate the way you play and how you approach it, I noticed that those who often plays contemporary music tends to focus on the scores to be played, but neglects the figure, the story of the composer .. . I think that your approach is very different ...

I think that a thorough understanding of the composer’s figure, of the context in which he lived and worked, of the influences that have marked the style is always of great importance, not only in the field of contemporary music. My approach is always this: I try to know as much as possible about the authors I’m studying. If they are not composers guitarists, I like to get an idea of their language through listening to the works intended for other staff which often provide useful keys and interpretative cues. In the case of Toru Takemitsu, a composer to whom I devoted the last 15 years, it has been particularly challenging and also very inspiring reading his philosophical essays about music, about nature, about the sound, the sound-silence ratio and the east -West.

You talked about Takemitsu, how did start the idea for the double CD dedicated to him? You were one of the few to record his complete works for guitar …

I consider Takemitsu as one of the great musical geniuses of the twentieth century. For me it was inevitable to passionate about his music, from the first piece that I studied, All in Twilight – which was assigned to me as a compulsory piece in one of the final rehearsals of my Solistendiplom Basel in 1992. In the following years I studied the Folios, his first work for guitar, and the compositions of the last period (Equinox and In the Woods), often placing them in my concerts’ programs. Until a few years ago it was difficult to obtain the 12 Songs, which, due to copyright restrictions, were not available in Italy. I managed to have them through a Japanese friend, that allowed me to complete the study of his solo production. Given the lack of attention that the guitar world had earmarked for this important composer, in 2003 I decided to record all his work for solo guitar – my record, among other things, contains the first ever recording of A Piece for Guitar, a short piece composed for the 60th birthday of Bussotti. Takemitsu immediately fascinated me for the wise, refined tonal palette (obtained, in the specific case of the guitar, without the use of special effects, but thanks to the simple resonance of natural and harmonic sounds). His music has always a contemplative trend: is the music of a person who likes to observe, meditate.

You also recorded a record with music by Nicola Jappelli, how did start the idea of recording his music?

My collaboration with Nicola began in 2002, when Light Frameworks, the first piece of a triptych dedicated to me, saw the light, completed in the following years with Sectional Drawings (2004) and Sharp Outlines (2007). I play a lot to music by Nicola in my concerts and among us established a lasting collaboration, which led to the composition of an additional passage dedicated to me, Overshadow, in 2011. The idea to merge this abundant material in a record project was a Nicola’s thing, and I enthusiastically received it. I completed the program with the study of some youth songs and the Sei Intonazioni. Finally, Nicola and I decided to include one of his songs for two guitars, Fly Far Away, and record it together – Nicola is an excellent guitarist. This project was for me the opportunity to address a completely new repertoire on records, largely made up for me and dedicated to me. I feel like the more personal disc between those that I have recorded. It was also the album that opened my collaboration with Brilliant Classics.

Your last CD is dedicated to Henze … What difficulties did you find playing the Royal Winter Music?

The Royal Winter Music pushes the guitar at the extreme limits of its expressive possibilities. The intimate guitar voice is assigned the task of reviving theatrical scenes of extraordinary intensity – think the two extreme movements that open and close the cycle, Gloucester and Mad Lady Macbeth. Between these two extremes, we find a variety of dramatic situations that require the guitar sound to be from time to time in a magical and dreamy, weeping, wry, violent, grotesque … dialogue. All this in a musical corpus of the total duration of almost one hour. Now. These aspects have been the difficulties (but also the main stimulus). I’m not missing other: the edition of the Royal Winter Music has numerous printing errors, not always cured (indeed, sometimes worse) in recent reprints. I tried to solve the many doubtful points by consulting the manuscripts (which are not always decisive: some passages of the First Sonata occur entirely rewritten edition) and comparing them with David Tanenbaum, American guitarist who has been a Henze’s friend and collaborator. From all of the information obtained from the study of the manuscripts and the testimony of David, I think I’ve solved reliably textual problems. The Royal Winter Music is real theater, made with the sounds and not with words. This requires a clever domain of guitar’s rhetorical sound possibilities as well as a knowledge of theatrical situations and the psychology of the characters in which music refers.

Improvisation doesn’t occupy a prominent place in my musical research. This practice, in my case, is mostly limited to the ornamentation of the ancient music, the nineteenth-century cadences and some random situations of contemporary music. The “classical music” usually leaves little room for improvisation – not surprisingly, Bernstein preferred to call it “correct” music, meaning music that only the composer can change (but that is inevitably changed by the personality of the performer). In the past, when the figure of the composer and performer coincide, improvisation had a much greater importance. Think about the authors of the Renaissance and Baroque, able to improvise toccate, ricercari and fughe. Today improvisation is practiced mostly in jazz and contemporary music. It may perhaps be illustrated by Takemitsu example: he was a jazz lover and wrote many passages of his Songs in an improvisational style that has many similarities with jazz, but by noticing it in a precise and detailed score.

How does your music methodology is influenced by the community of people (musicians or not) you work with? Doyou change your approach in relation to what you directly or indirectly receive from them? If you listen to a different interpretation of a passage you already played and you want to perform do you take care about this listening or do you prefer to proceed in complete independence?

I try to develop a strong point of view about the repertoire that I face, into which inevitably “internal” contributions (my sensitivity, my understanding of the piece, the language of the form, etc.) and “external” (executions listening, other points views, records, discussions with other musicians – for example, in the practice of chamber music) enter. I always listen with interest to the recordings of the more or less recent past masters, in the belief that a thorough knowledge of the history of interpretation of our repertoire is crucial. I always listened to and studied with particular attention Segovia and Bream’s executions of passages dedicated to them. I think it’s an essential starting point. Then I make my own choices and I follow my own way, but without loosing the possibility to get inspired by what is good and beautiful in those executions – and there’s a lot.

I sometimes feel that in our time music’s history flow with no particular interest in its chronological course. In our disco-music library before and after, the past and the future become interchangeable elements. Could this be the risk for an interpreter of a uniform vision? A music “globalization”?

I see that risk too, which can only be avoided with culture, with knowledge. Knowledge of styles of different eras, genres, historical and cultural context of the practice and of instrumental technique in use. Learn to know how to contextualize. Just so you can face the listening and the study of the repertoire of the past and the present without flattening everything in a uniform approach.

Are there five essential records for you, to have always with you … the classic five discs for the desert island …

Given that my favorite records, as well as my favorite pieces, change over time, now I would say:
-The Bach’s Goldberg Variations in the last Gould’s recording – slower and more contemplative, a kind of spiritual testament of his art. A Bach performed in absolutely not “philological”, but of sublime depth;
-The Two Sextets by Brahms String – I really like the EMI recording with Menuhin as first violin;
-The Chopin Etudes performed by Pollini – the highest technical and musical teaching;
-I Preludes of Debussy performed by Benedetti Michelangeli – a domain class timbre unattainable;
-Dedication – In my opinion, the most beautiful Bream’s record.

I recently finished recording a new CD for Brilliant Classics, dedicated to the integral of the Sonatas for Guitar by Fernando Sor (Grand Solo, Op. 14, Sonata, Op. 15 / b, Major Sonata, Op. 22 and Op. 25). Soon I will start a new recording project in a duo with the violinist Piercarlo Sacco – with which I have already recorded an album dedicated to Piazzolla.