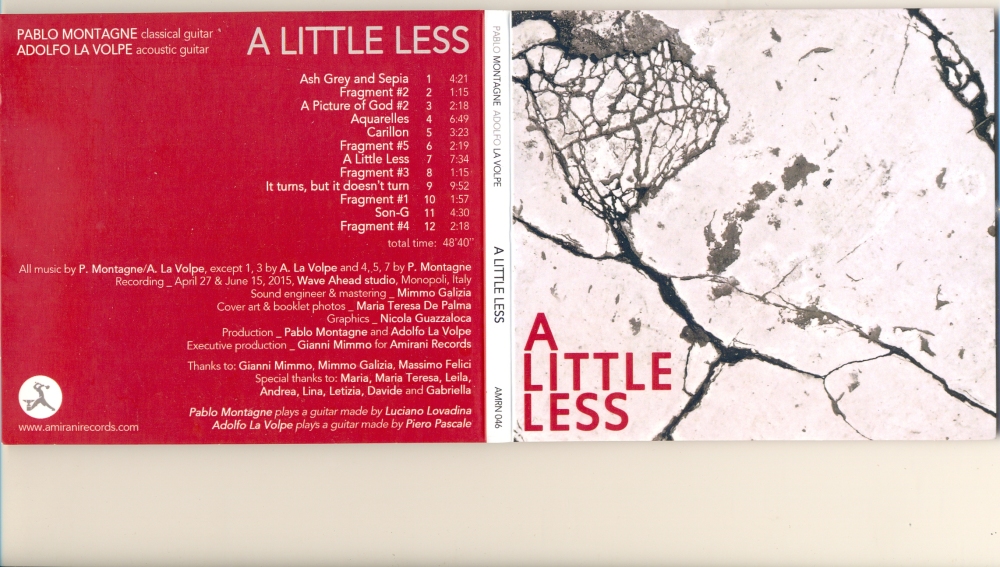 “A little less conversation, a little more action please” sang Elvis Presley in 1968, and Pablo Montagne and Adolfo La Volpe seem to get his word: facts not talking. Last time these two guys, two original guitars players with different stiles and characteristics, decided to join their forces for a new album for guitars was in 2012.
The previous one was the “15 Improvisations” release made for italian netlabel AlchEmistica:

mainly characterized by the use of acoustic guitars and radical improvisation.
In this A Little Less we find different, more relaxed, atmospheres characterised by a greater tonal diversification through the use of classical guitar by Montagne. The result is a work of interactions, not only on the musical interplay level (Montagne and La Volpe are playing toghter from over ten years and they not only share a close friendship but also many experiences in many different areas) but at the level of construction, exploiting the possibilities offered by the combination of compositional structures and immediate improvisations, creating a happy, fertile and creative union.
Unlike their other works, here the melody plays a vital role, “softening” and making more familiar all the elaborate oblique structures created by the two musicians, at the same time creating a different context to dissonance and texture with which they always enrich their music. The Admirani Records website tells about “superb concentration, utter attention to detail, elegance and musical poetry that investigates tone colours, overtone masses and dramatic weights with intelligence and natural attitude.”, it’s almost impossible to disagree!