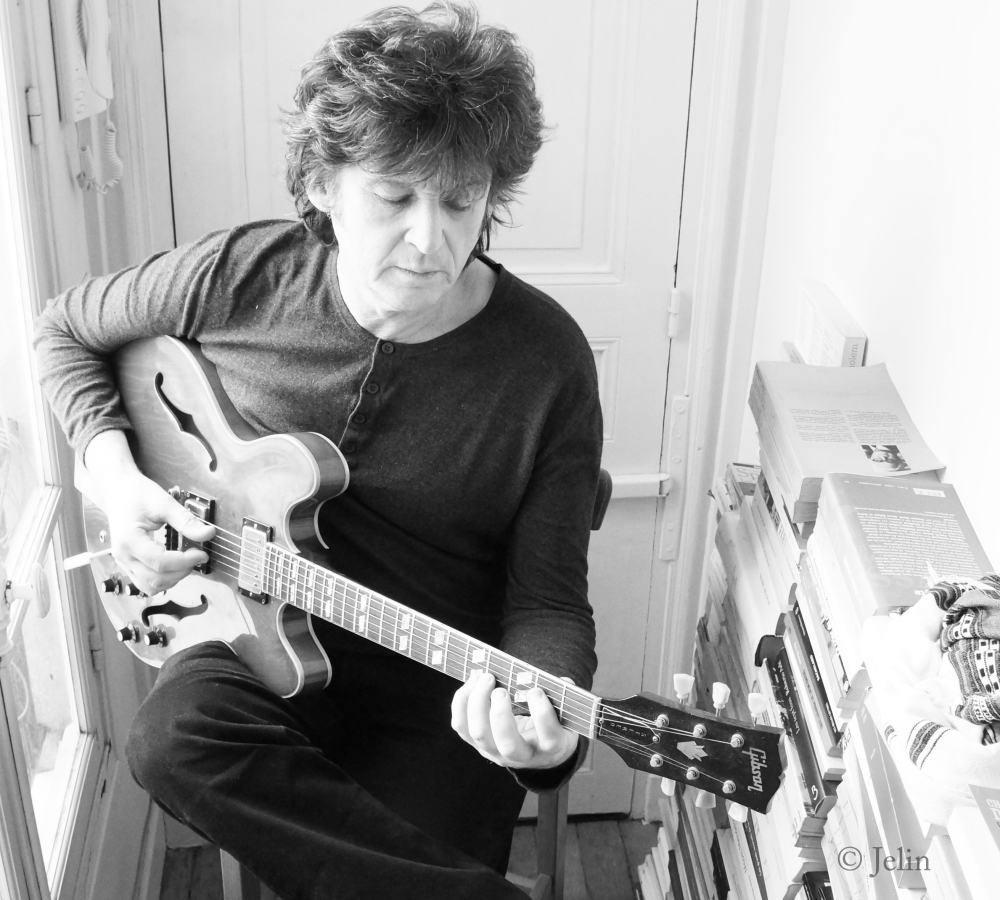 “Philosophy is essentially a reflective activity. It always requires a surface to bounce on. In a cultural void we would not exist.” DJ Spooky in Cox, Franck, Hinant, Miller, Murphy, Paci Dalò, Quinz, Szepanski, “Millesuoni, Deleuze, Guattari and Electronic Music” (Cronopio, 2006) p.152

I knew Richard Pinhas indirectly. Years ago, I was deepening for personal enjoyment, some of the aspects related to music and thought of Gilles Deleuze, and I bought this book “Millesuoni. Deleuze, Guattari e la musica elettronica”, written by several authors: Cox, Franck, Hinant, Miller, Murphy, Paci Dalò, Quinz, Szepanski.
By reading it I ran into the name of Richard Pinhas, a guitarist with a really out of the ordinary curriculum .

Once an assistant of philosophy at the Sorbonne in Paris and passionate about science fiction, Pinhas left the academic world to create the Heldon’s group first and then pursue a solo career. Influenced by the political climate, Fripp & Eno’s music, science fiction literature and ambient music, Pinhas proved to be a “foreign body” within experimental guitarists, he succeeded in developing an attitude towards music that goes well beyond the sounds he draws from his guitars, taking refuge in an almost conceptualization of their meaning, leaning on the philosophical and aesthetic theories of Gilles Deleuze and Felix Guattari. I wanted to try to write about his music using these three-CD, all three relesed at different times at Cuneiform Records, in a moment when it seems to me that his musical activity has come back to very interesting levels ….

The multicolored cover of this cd seems a cool fresh game made with Photoshop, while the ideas of the two philosophers (Deleuze and Guattari) are noticed since the title of the disc and they are heard from the beginning in the crescendo of the first track, EFRIM. The sound coming out of the stereo speakers (in this case adjusted to high volume) is a music based on overlapping notes of distorted notes, dilated, rich in harmonics and echoes creating a weave, a musical plaque where it is difficult to distinguish and remember the individual steps that are repeated with minimal variations and where it’s easier to wrap around and engage in a lush, bouncing and kaleidoscopic soundscape.
I think this is more than minimalism in this case, it’s perhaps better to use the term “maximism” by going to the memory to other similar music such as those of Brian Eno and Robert Fripp, though here the melodic content is smaller while higher levels of distortion, all rewarding the rhizomes and the body without organs of Gilles Deleuze, only this time the body is that of an electric guitar.

“The latest records by Richard Pinhas on Sub Rosa and Cuneiform, which are also built around Deleuze’s words and voice, are a third memorial, although they are not labeled in this way.” Cox, Franck, Hinant, Miller, Murphy, Paci Dalò, Quinz, Szepanski, “Millesuoni. Deleuze, Guattari e la musica elettronica” (Cronopio, 2006) pag 61

A super experimental group? The Avant-garde Creams’ version? A new concept of a psychedelic power trio? I don’t know. But this trio shoots, literally shoots a tense, energetic, strong, and powerful music. These are blocks of high-intensity sounds, are these conceptual movements expressed on musical plans? Perhaps, but the music here is intensely enjoyable even on an acoustic and physical level: play it at high volume and you will see!
The presence of Masami Akita, aka Merzbow, could suggest to the listener the presence of a monotonous noise, but this is not so, thanks to the really powerful and physical drumming of Tatsuya Yoshida, which interferes and creates new rhythmic dynamics against Pinhas and Merzbow sound masses’ collisions, the disc is pleasing and, at least for me, enjoyable. Pinhas, here again, doesn’t deny his philosophical past quoting the philosopher and mathematician Alfred North Whitehead in the cd’s title, this music suffers from a dreary and apocalyptic atmospheric bouncing on the polychrome cover of the disc, where disturbing giant oil towers stand against a plumbeous sky guessing weird scenarios for the future …

If with the previous listening to Process and Reality’s record we talked about atmospheric and almost apocalyptic atmospheres, for this Mu I feel instead to use terms like pastoral and almost zen-bucolic atmospheres. Is cosmic music? Is it tribal music? Have the cosmic couriers started to run again? Surely in this record, Pinhas returns to his philosophical concepts, this time using and linked to zen Buddhism.
In Zen Buddhism, in fact, MU is a term that can be roughly translated as “no” or “without”. This term is known to be the answer to a famous Kōan of Chinese origin, a koan created by master Zhàozhōu Cóngshěn in this anecdote:
Once a monk asked the master Zhàozhōu: ‘Does a dog possess Buddha’s nature?’
Zhàozhōu replied: Mú!
Beyond the exotic nature of this anecdote, this underlies another concept: given that some Chinese and Japanese Buddhist masters had affirmed the universality of Buddha’s nature, to answer “no” to this question would mean denying their wisdom, while saying ” Yes “would seem to follow acritically and pedissequely their teachings. It’s therefore possible to interpret Zháozhōu’s response (and perhaps even this record) as a non-denying or asserting, denying or asserting answer. In other words, the answers ‘yes’ and ‘no’ are at the same time both right and wrong. Given that the music of these discs is entirely improvised, perhaps this might be an interesting interpretive key: music as an act in itself, and nothing else. “Mu” as a moment in which you just have to listen and let yourself be carried without overcrowding and excessive analysis.
In this record, Pinhas seems to return to more serene, “almost frippertronic” atmospheres, while the presence of bassist Michael Manring and drummer Celso Alberti adds waves and movements to a music that, as is often happen within electronics or ambient music, it may become too static.

In the end, I feel that Pinhas’ ideas, when they work, transcend any convention or stereotype, creating a really special and personal music. 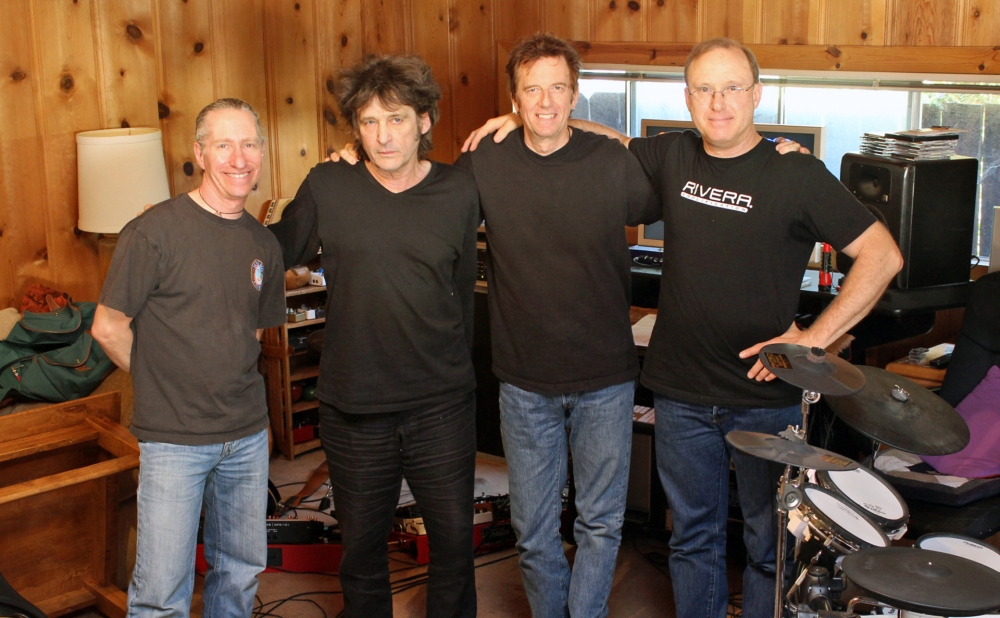