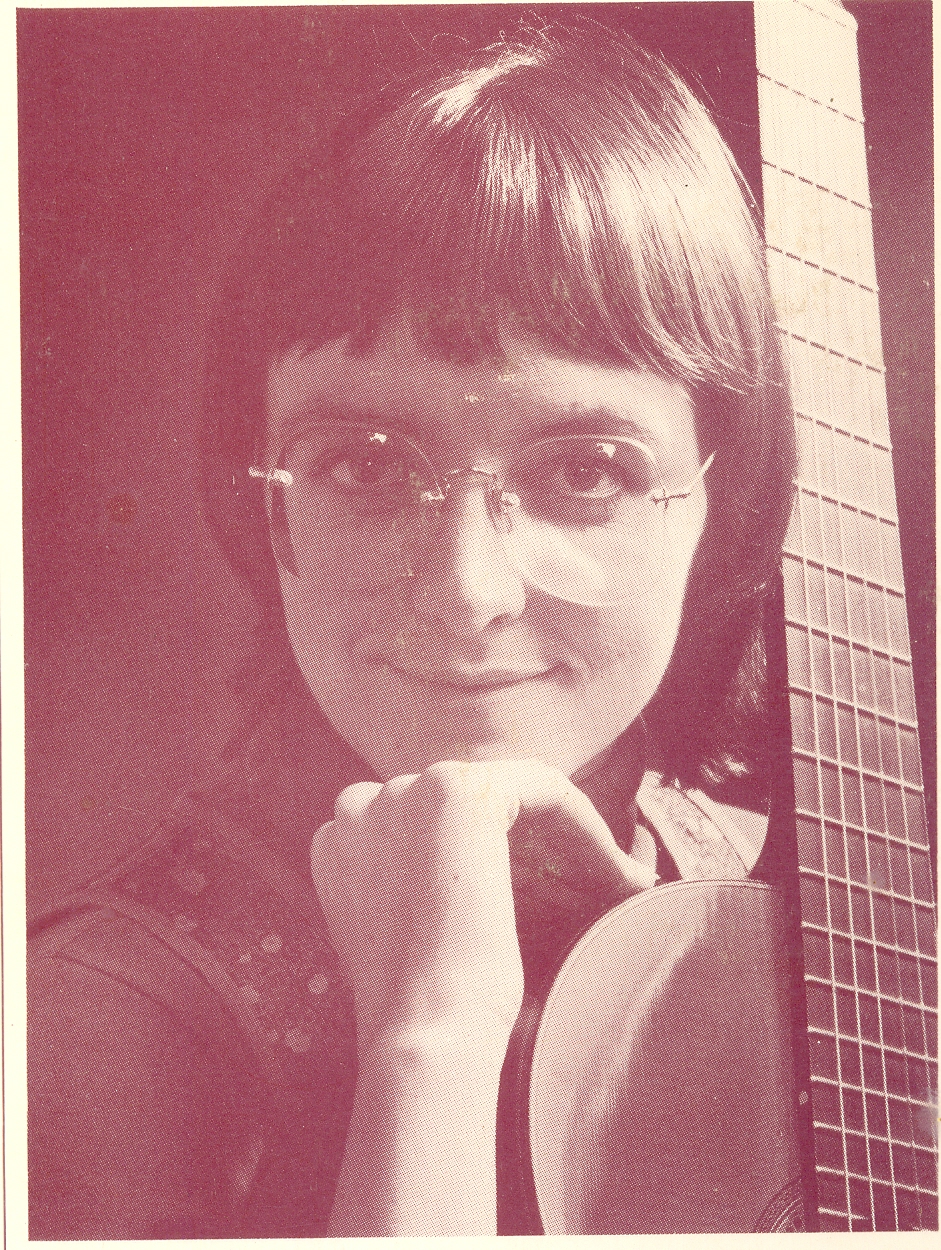 I would like to thank Jens Rossel for showing me Gunnar Berg’s music, introducing me to Maria Kämmerling and overhauling this assay.

Vinyl records, LPs are a great passion. I love collecting them, more for the pleasure of handling them, touching them, looking at the covers, more for the love of design than for the sound. For the sound I appreciate much more the CD.
Another interesting aspect is the possibility to find recordings that have not yet been remastered and reprinted on CD, which is largely part of records produced by independent record companies, printed in a few thousand copies, which have not yet received the interest of other collectors. This gave me the opportunity to know and appreciate the works of many unrecognized and often forgotten guitarists. Maria Kämmerling, for example, is a great German classical guitarist. In the last months I had the opportunity to buy four LPs played by her, four LPs where she plays baroque, romantic and contemporary classical music, showing a great musical maturity and ability.

I looked for informations about her on the Internet, but I got more informations in the notes of her LPs, I found no videos or music played by her on YouTube or in other video websites, and there is no website about her.
Maria Kämmerling was born 1946 in Leverkusen and studied with Professor Karl Scheit at Hochschule der Musik und Darstellende Kunst in Vienna, from where she graduated with distinction as a soloist in 1971.
In 1971 she married another great guitarist, the Danish Leif Christensen (1950-1988) and settled in Denmark, teaching at the Royal Danish Academy of Music in Aarhus. Both as teachers and as musicians this couple were pace-setters in Danish musical life, and they were greatly respected on the international guitar scene with concerts and a considerable LP production of both classical and modern guitar music.
The encounter with the Danish music scene was a surprise for Maria Kämmerling. She had undergone her musical training in the Cologne of Stockhausen and Kagel and at the Hochschule fur Musik und Darstellende Kunst in Vienna, and not much was known there about Danish composition music and the tendencies towards simplicity that came as a reaction to complex international modernism and became known under the overall designation the New Danish Simplicity – a movement that with some justification can be compared to the attitude behind the famous Danish Dogma films of the nineties. (1)

(1) Notes from the booklet of the cd “Gunnar Berg Melos”, written by Christoph Jäggin, in 2008.

As a member of the chamber ensemble Sub Rosa, which played both Baroque and contemporary composed music, Maria Kämmerling participated in first performances of several Danish works – including, in 1976, Per Nørgård’s Nova Genitura. It was on that occasion that she first heard music by Gunnar Berg, whose Triedra and 9 Duos were played by Annette Friisholm, recorder, and Hans Erik Deckert, cello. 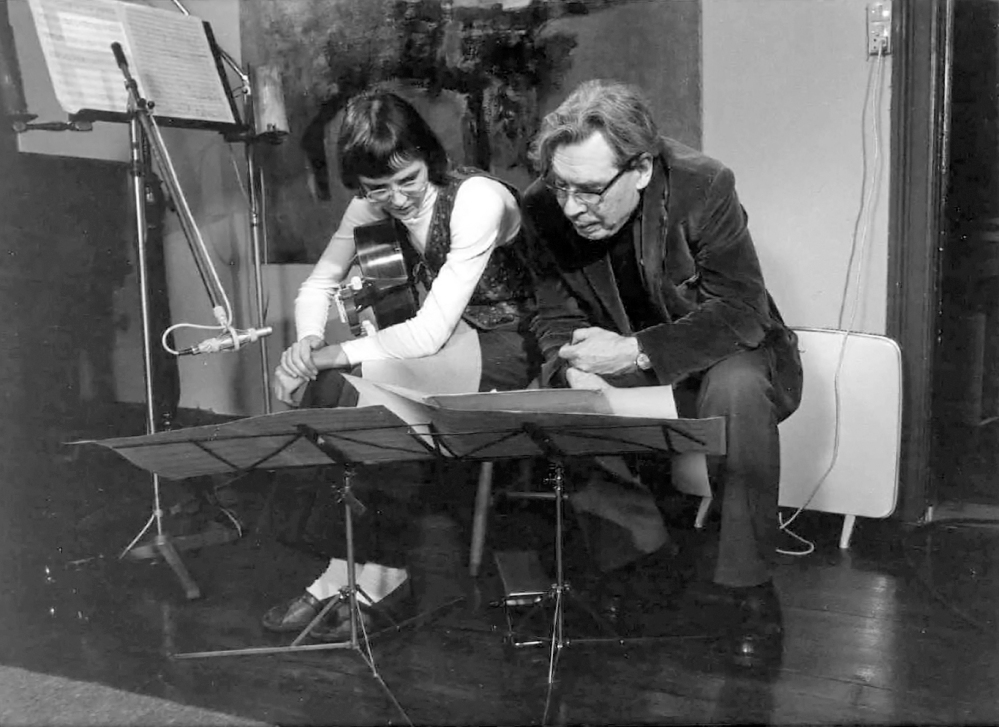 She was giving a large number of concerts both on modern and historicaI instruments, and she was involved in various radio and television broadcasts as well as record productions.
She is best known for her interpretations of contemporary guitar music, including pieces by Gunnar Berg, Axel Borup-Jørgensen, Cristóbal Halffter, Vagn Holmboe and Bruno Maderna. She also played in a duo with her husband Leif Christensen. Danish Guitar Society gave her a special prize in 2014. 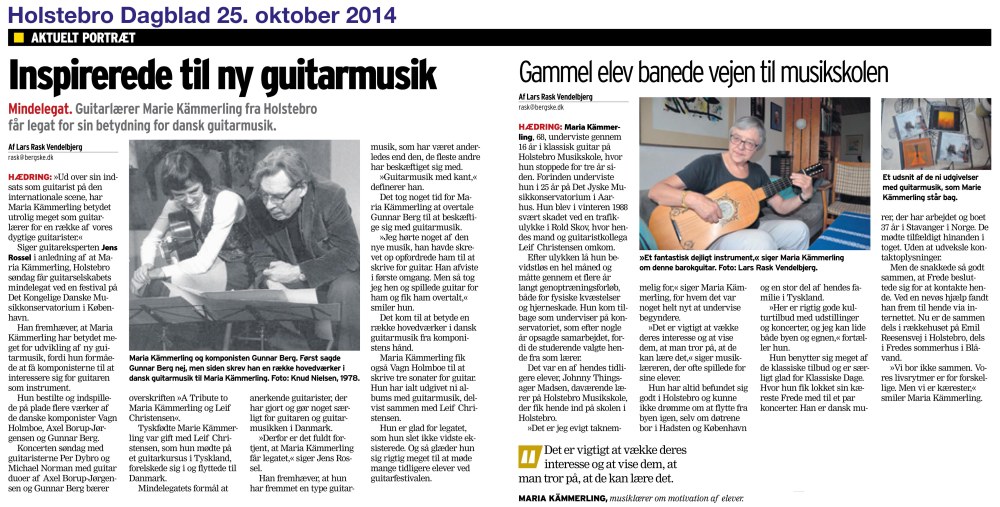 I would like to talk about her music by introducing to you the first LP played by her I was able to find: “Maria Kammerling Guitar Recital”, where she plays music by Bach, Ravel, Sor and Borup-Jørgensen. Like most of her and other recordings with Danish classical guitar music this LP was produced by the Danish indipendent label Paula. This disc was recorded in Hjembæk kirke and released in 1979 with this tracklist: 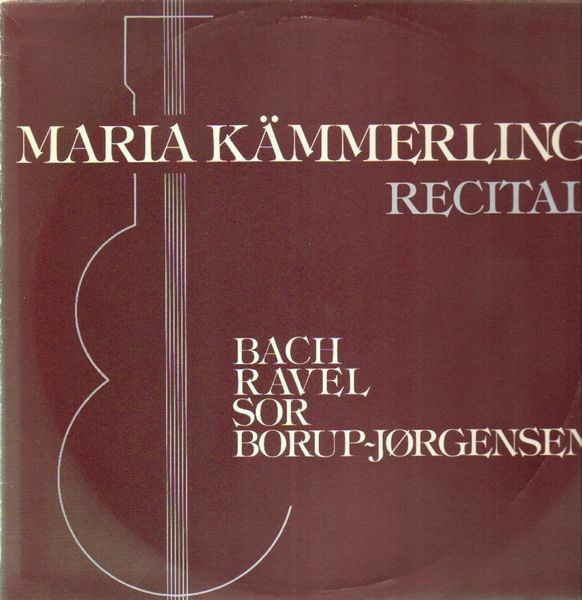 The sound engineers were Karin Jürgensen and Leif Ramløv. 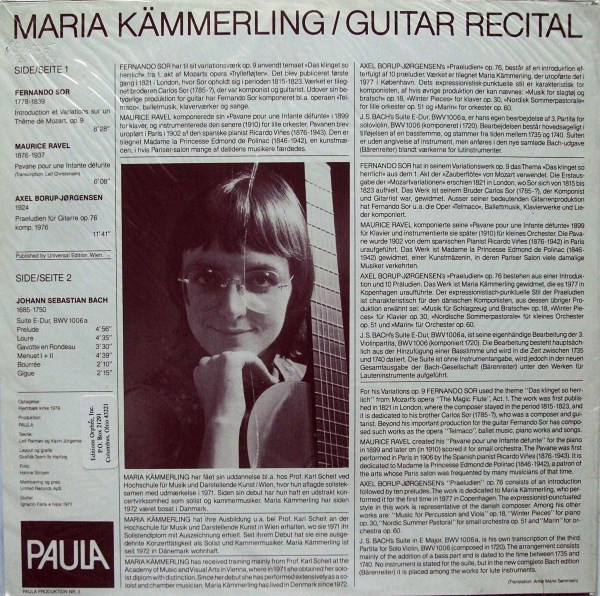 Let’s talk about the well played music by Maria Kämmerling. For his Variations op. 9 F. Sor used the theme “Das klinget so herrlich” from Mozart’s opera “The Magic Flute”, Act. 1. The work was first published in 1821 in London, where the composer stayed 1815-1823, and it was dedicated to his brother Carlos Sor (1785 – ?), who was a composer and guitarist.

Maurice Ravel created his “Pavane pour une Infante défunte” for the piano in 1899 and later on (in 1910) he scored it for a small orchestra. It was dedicated to Madame la Princesse Edmond de Polinac (1846-1942), a patron of the arts whose Paris salon was frequented by many musicians of that time. This transcription for guitar was made by Leif Christensen.

Borup-Jørgensen’s “Präludien” op.76 consists of an introduction followed by ten preludes. The work is dedicated to Maria Kämmerling, who performed it the first time in 1977 in Copenhagen. The expressionistic punctuated style in this work is representative for the Danish composer.
J.S. Bach’s Suite in E Major, BWV 1006a, is his own transcription of the third Partita for solo violin, BWV1006 (composed 1720). The arrangement consists mainly of the addition of a bass part and is dated between 1735 and 1740. 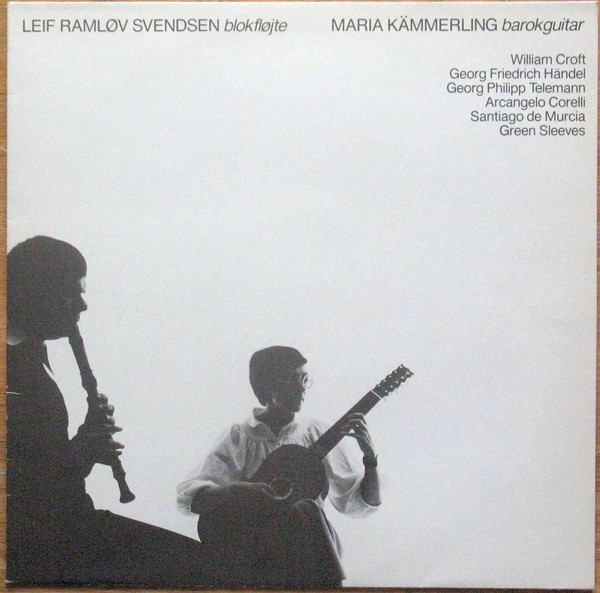 On this LP recording Maria plays a baroque guitar made by David Rubio in 1976, a copy of Giorgio Sella’s guitar (about 1640), placed in Germanisches Nationalmuseum in Nürnberg. Maria plays with the flautist Leif Ramløv Svendsen. Ramløv Svendsen studied with professor Ferdinand Conrad at Hochschule für Musik und Theater in Hannover, from where he graduated as a soloist in 1978. He received a grant from the Jacob Gade Foundation in 1974 and another grant from Per’s Foundation in 1977. 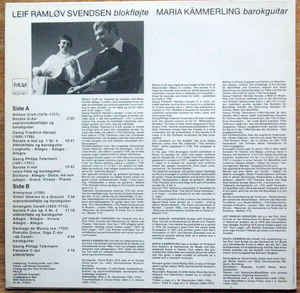 Wiliam Croft was organist and leader of the Choir at Westminster Abbey in London. The sonata in G major for recorder and continuo, which has only one movement, comes from a collection of 6 sonatas – three for recorder and three for violin – published by Croft in 1700.
Georg Friedrich Händel’s sonata in a minor for treble recorder and continuo is found in a collection of 15 solo sonatas opus 1, which was published in London in 1731. Besides 4 sonatas for recorder the collection comprises sonatas for violin, oboe, and transverse flute.
Georg Philipp Telemann’s sonata in B major is taken from the second volume of his 12 “Methodische Sonaten” for violin or flute, which appeared in Hamburg in 1732, the first volume was published 1728. 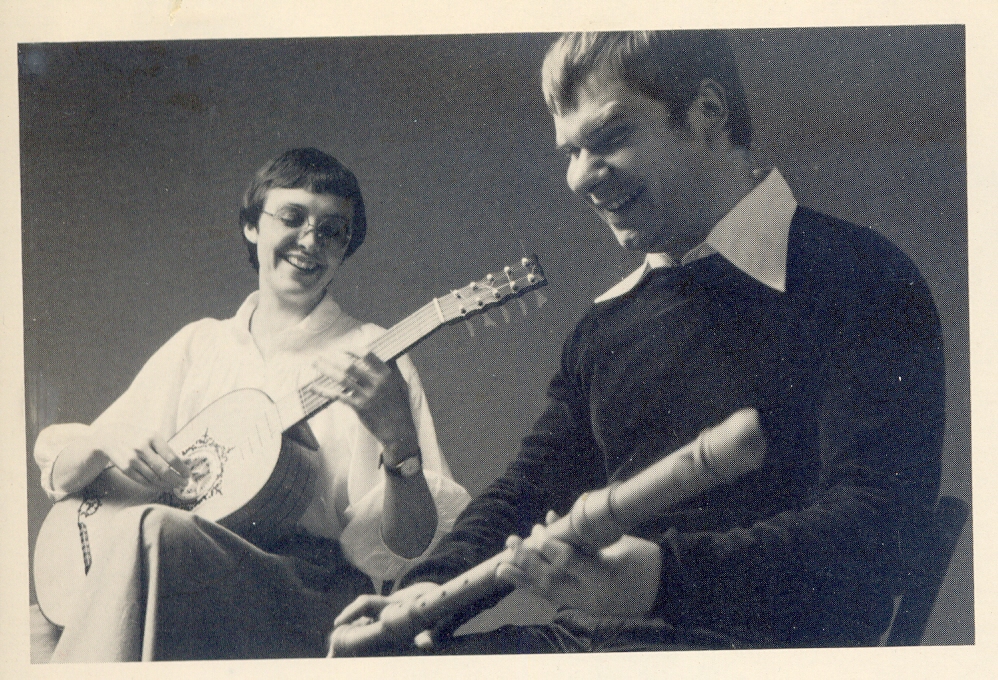 The variations on the English folk tune “Green Sleeves” come from the collection “The Division Flute”, which appeared in 1706. The composer is unknown.
In 1700 Arcangelo Corelli published in Rome 12 sonatas for violin and basso continuo opus 5. Sonata No. 4 in F major from this collection appeared in London in 1707, together with No. 3 in C major in a version for recorder and continuo, where the adagio movements have been ornamented by “An eminent Master”.
The Spanish composer and guitar player Santiago de Murcia arranged a number of Corelli movements for guitar. These transcriptions are found in his collection “Passacalles y obras de guitarra”, Madrid 1732. Preludio, Grave and Giga comes from part of Corelli’s Sonata Op. 5 No.3.
Around 1732 Telemann composed 12 Fantasies for solo transverse flute. The first of these fantasies in A major is here played on an alto recorder in C major. 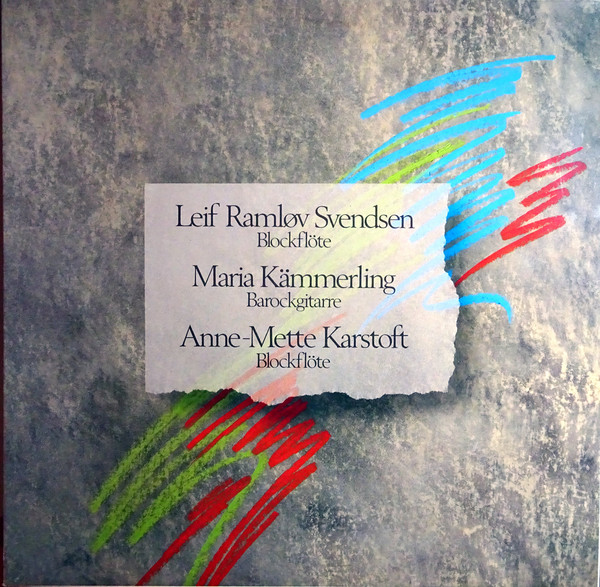 Sonate Op. 2 No. 4 in G-minor. Composed by Georg Philipp Telemann

Sonate Op. 5 No. 3 in C-Major. Composed by Arcangelo Corelli 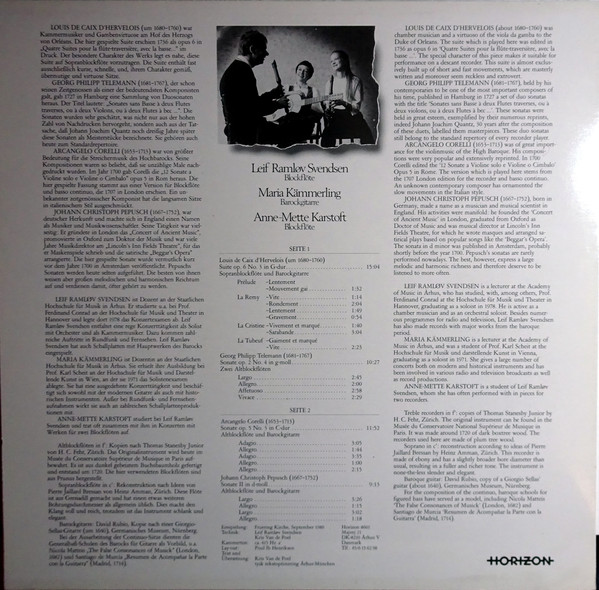 Louis de Caix d’Hervelois (about 1680-1760) was a chamber musician and a virtuoso of the viola da gamba to the Duke of Orleans. The suite which is played here was edited in 1736 as opus 6 in “Quatre Suites pour la flûte-traversiere, avec la basse …” The special character of this piece makes it suitable for performance on a descant recorder. This suite is almost exclusively built up of short and fast movements, which are masterly written and moreover seem reckless and extrovert.

Georg Philipp Telemann (1681-1767), held by his contemporaries to be one of the most important composers of his time, published in Hamburg in 1727 a set of duo sonatas with the title “Sonates sans Basse à deux Flutes traverses, ou à deux violons, ou à deux Flutes à bec …”. These sonatas were held in great esteem, exemplified by their numerous reprints, indeed Johann Joachim Quantz, 30 years after the composition of these duets, labelled them masterpieces. These duo sonatas still belong to the standard repertory of every recorder player. 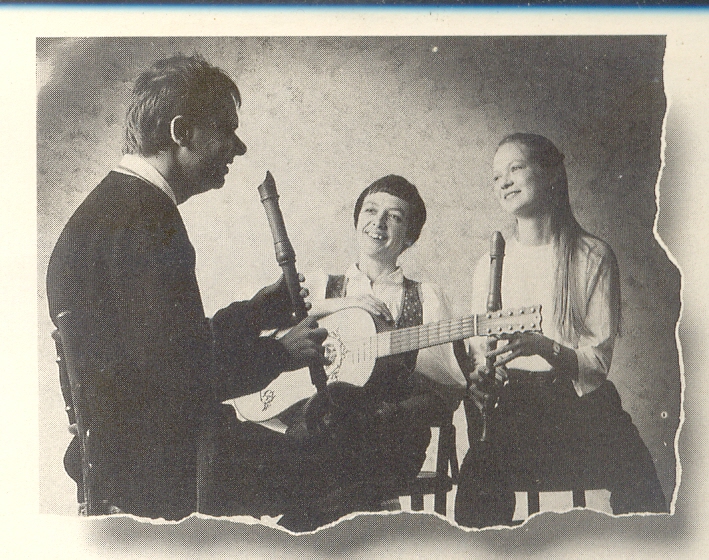 Arcangelo Corelli (1653-1713), as we have seen before, was of great importance for the violin music of the High Baroque. His compositions were very popular and extensively reprinted. In 1700 Corelli edited the “12 Sonate a Violine solo e Violine o Cimbalo” Opus 5 in Rome. The version which is played here stems from the 1707 London edition for the recorder and basso continuo.
An unknown contemporary composer has ornamented the slow movements in the Italian style.
Johann Christoph Pepusch  (1667-1752), born in Germany, made a name as a musician and musicaI scientist in England. His activities were manifold: he founded the “Concert of Ancient Music” in London, graduated from Oxford as Doctor of Music and was musical director at Lincoln’s Inn Fields Theatre, for which he wrote masques and arranged satirical plays based on popular songs like the “Beggar’s Opera”. The sonata in d minor was published in Amsterdam, probably shortly before the year 1700. Pepusch’s sonatas are rarely performed nowadays. The best, however, express a large melodic and harmonic richness and therefore deserve to be listened to more often. 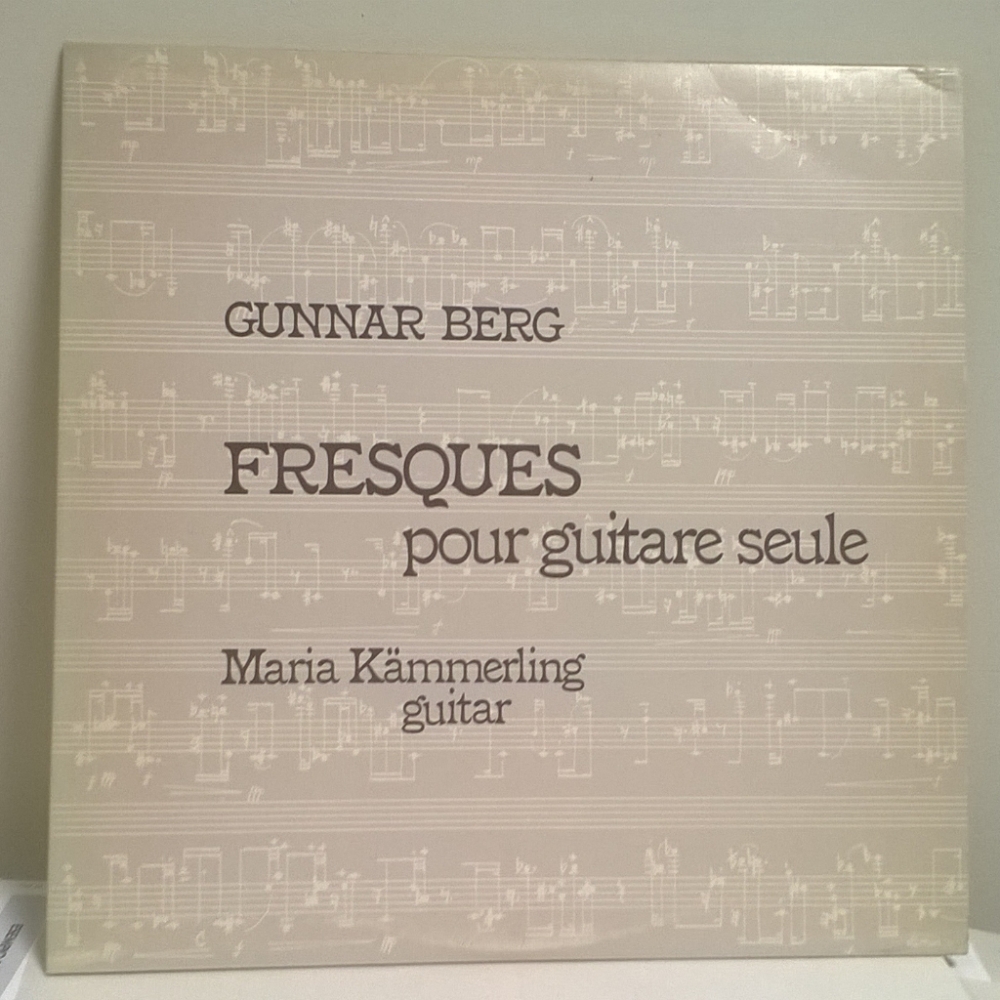 The fourth and last record testify Maria Kämmerling’s interest for contemporary music. As we have seen before Maria Kämmerling participated in first performances of several Danish works – including, in 1976, Per Nørgård’s “Nova Genitura”. It was on that occasion that she first heard music by Gunnar Berg.
Maria Kämmerling visited Berg and invited him to write for her instrument. Berg had no experience of the guitar and refused with the words: “Berlioz, in his Traité d’lnstrumentation have said: If you do not play the guitar yourself, don’t write for this instrument”. However, Maria Kämmerling insisted, and Berg was persuaded to let her introduce him to the instrument. For the next year they jointly explored the guitar. Without regard to ordinary, normal playing and composition style, Berg went to work using quarter-tones, not only as individual notes, but also in chords, and sometimes in combination with harmonics. In 1978 this unusually fruitfull collaboration between composer and musician resulted in “Fresques” for solo guitar, which with its array of quarter-tones, previously unheard combinations of harmonics and an extreme spectrum of dynamics and stroke types is one of the most concentrated works that modern guitar music has to offer. The Swiss guitarist Mats Scheidegger has called “Fresques” a great vision for the instrument and regards the almost hour-long piece as one of the century’s most significant guitar works, presenting nothing less than a whole sound- topography of the instrument in a beautiful and complex way; he compares “Fresques” to Helmut Lachenmann’s “Salut für Caudwell” and Brian Ferneyhough’s “Kurze Schatten II”. 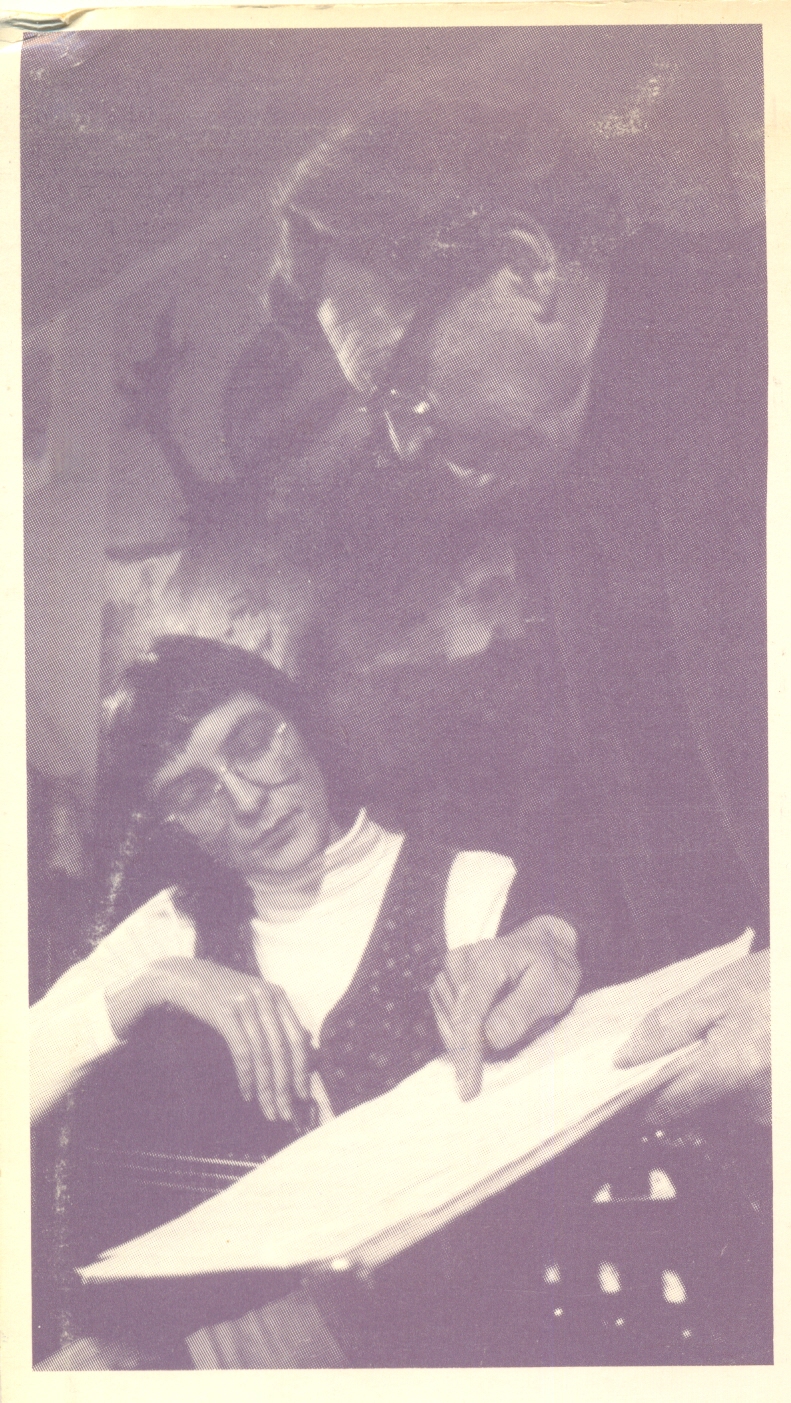 Maria Kammerling gave “Fresques” its first performance in Thisted Church on August 23, 1978, and the next year she recorded it for the label Paula Records, a recording that stands as striking testimony to an extraordinary musician and an unusual ability to realize complex scores, a dexterity she lost in the tragic car accident in 1988, which Leif Christensen did not survive.

The title is “Fresques pour guitare seule” and shows this tracklist:

“Fresques” has four parts with a total playing time of 53 minutes, each of the four parts having its own characteristic form, although Gunnar Berg has used the same basic material for the whole work. Thus, in “Fresque” I the dynamic aspect is most important, in “Fresque” II the rhythmic. “Fresque” III uses quarter tones and harmonics in single notes as well as in the chords, which contain also normally strummed notes. “Fresque” IV is characterized mainly by chord playing, often combined with glissandi, and passage figurations with a differentiation of sound produced by different forms of strumming.

I think it’s incredible that such an important musician has been left aside and almost forgotten. I hope these music recordings, these discs will soon be reprinted, maybe in a nice cd box.  Maria Kammerling is a real modern figure in the classical guitar’s world.