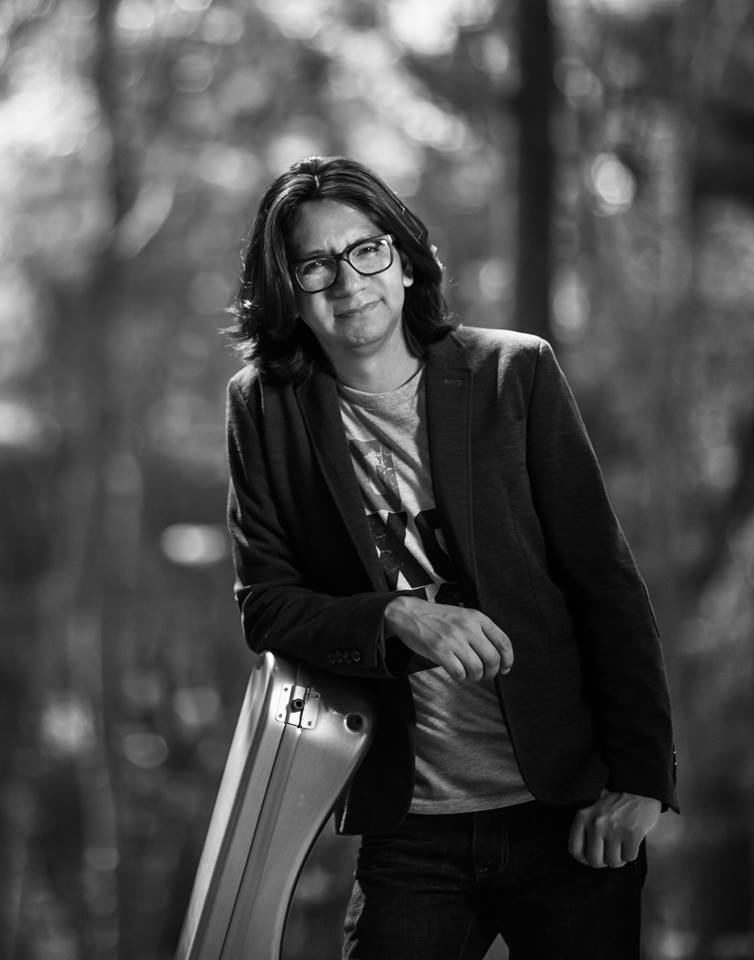 I started playing the guitar from an early age because of the inspiration of the music of Agustín Barrios Mangoré and from there a path full of very wide possibilities, soon there was also the interest in creating my own music

What guitar do you play and have you played before?

Currently I play with a wonderful guitar of the Yulong Guo Chinese luthier and a pair of Baroque guitars – Alexander Hopkins (Palma de Mallorca) and Agustin Enriquez (Mexico) -, my interest as an interpreter focuses exclusively on contemporary music and music for baroque guitar .

You are the artistic director do the Cuarteto Mexicano de Guitarra, how did start the idea to create this ensemble?

This ensemble was founded in the year 2011 with the intention of giving diffusion to the Ibero-American repertoire of new creation and in 2012 we had the debut with the National Symphony Orchestra of Mexico in the famous Palacio de Bellas Artes, with the premiere of Mexico Concert for 4 guitars and orchestra. During all this time there have been several changes in the members of the quartet.

Without a doubt, the mission is to create and disseminate a new repertoire based on original works and new arrangements created expressly for the Mexican Guitar Quartet.

How did start the idea to create your cd “Voices de Iberoamerica”?

The idea comes from the creation of the quartet, with the interest of recording the music that little by little we were having as a repertoire. We made the premiere in Mexico of the work of Ian Krouse and Agustin Castilla-Ávila in the XXXV International Forum of New Music “Manuel Enríquez” in 2013 and from there we have not stopped playing these works.

Finally, this recording project was completed thanks to the grant awarded by the National Fund for Culture and the Arts (FONCA) and it was recorded at Victoria Records (one of the best studios in Mexico) and mastered at Masterhead Lab (New York, USA )

For me the improvisation is something vital, without a doubt it has been lost by the rigidity of the musical writing, nevertheless it is part of the musical creation. In actuality I have the pleasure of collaborating in other artistic projects as an interpreter of ancient music and electronic music that allow me much more flexibility in creativity and improvisation live.

Music is undoubtedly part of humanity and the contributions made by artists at all times are invaluable, there is a loss of identity but at the same time a process of multiculturalism, that is where emerging artists have managed to create great and interesting changes in direction in art.

What are your essential five discs, always to have with you .. the classic five records for the desert island ..?

My 5 essential discs are:

I have 2 discography project as a music producer:

These discs will be ready by the end of this year 2017.

As interpreter I am in permanent collaboration with the Mexican percussionist Juan Carlos Cirujeda in an eclectic music project for Steel Drum, amplified guitar, double bass and live electronics.

My time is divided between teaching, the creation of new works and collaboration with various artistic projects.