When did you start playing the guitar and why? What did you study and what is your musical background?

I started with the violin at age 5. The guitar came when I was a teenager and I stumbled upon an LP with a recording of Bach’s Prelude 997. This was a revelation and I knew that was what I wanted to play. Later I studied classical guitar at the Sweelinck Conservatorium in Amsterdam as well as the Hochschule für Musik, Köln. After graduating I continued my studies in the Doctoral Program of the Sibelius Academy in Helsinki, spending several months in the Elisabeth University of Music in Hiroshima as well. My main guitar teachers where Zoran Dukic, Jukka Savijoki and Norio Sato.

The fundaments of my musical thinking where formed early at the cathedral school in Haarlem, Holland. In addition to the regular school subjects we had singing lessons every day as well as instrumental and theory lessons. As a chorister I sang music by Palestrina, Byrd, Bach, Mozart, Britten etc. at Sundays in the cathedral. Whenever I hear the sound of a good choir I find myself having goose-bumps and being transported to those juvenal days of effortless beautiful music making in fantastic acoustics. In my guitar playing I think this eduction shows for instance in that I take much care of how and when to end every note. You know, with the fingertips of the left hand slightly on top of the fret, one can control the speed of the fading of the note, like a singer can. Another thing is that it is very easy for me to think and listen polyphonically. Also I am very pedantic and precise with intonation and I spend many hours in getting that right for every piece. Despite the common misconception, it is perfectly possible to raise or lower the intonation of any note on the guitar by adjusting the pressure of the fingers against the string.

How did you get the idea to release a solo album like “Ancient Greece Musical, Inspirations”? Why did you choose Pilfink records to release it?

With the Finnish Pilfink label we have done 2 records before and I like the idea of continuity. We have a mutual trust in each other. The idea of the Ancient Greece album came to me after I had premiered the Apollo, Toccate by Graham Lynch. I felt that here we have a piece that really deserves to be known by other guitarists and music lovers in general. We guitarists do have a great repertoire these days, and it is expanding all the time but, there is still not that many good solo pieces with a duration of over 15 minutes. Since I have always been fascinated by the myths, literature and philosophy of Antiquity, it was obvious that the other pieces to be recorded alongside the Apollo piece would all be connected with the mutual theme of Ancient Greece. 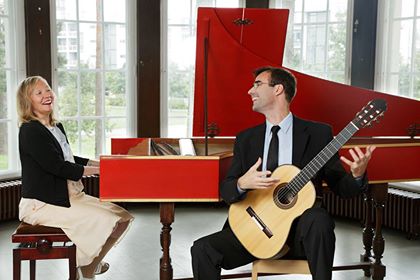 How did you start your collaboration with Assi Karttunen? I was surprised by the duo guitar – harpsichord, it was a nice combination…

I have to admit that I am a ”Wannabe harpsichordist”. I love the repertoire and play as much of it as I can on guitar. After I played harpsichord pieces by William Byrd on guitar for Assi she, very open minded, suggested to do concerts together and play in duo. At first I was sceptic because I was afraid the combination of harpsichord and guitar wouldn’t work. I thought the harpsichord’s resonance, fast attack and volume would eat away all of the guitars resonance, and all that’s left for me would sound like ”Plock, Plunck, Plim or Plam” so to say. Well, things turned out differently… I have played in all possible chamber music settings and, despite the fact that I enjoy very much working with singers, violinists, flutist etc. always I felt that I loose some of the expressive possibilities the guitar offers. Whereas playing with harpsichord is the opposite, it’s like having a sonic magnifying glass which enhances the smallest things I do on the guitar. The harpsichord has no vibrato and very little dynamics, so when I use even the smallest vibrato it becomes very prominent. Dynamics and different sound timbres are also enhanced in the same way. On the other hand, the sound of both instruments can blend into a complete new sound. It’s basically 1+1=3.

Can you tell us about the different tunings you had to use in this cd?

In general I think guitarists should be much more aware of intonation and its possibilities. It is an expressive tool way too good not to use.
In this recording I use six different tuning systems, four of which were already in use in Antiquity. We are able to examine the tuning systems of Olympus (ca. 600 BCE), Archytas and Ptolemy (ca. 85–165 CE) because the details of the ratios and relations between intervals they employed have been preserved to this day. The sound worlds of these tuning systems sometimes differ radically from one another, while sometimes the distinction is only very subtle. At such times the choices of the individual musician can be compared to the work of a sommelier, who selects a particular wine based on the qualities of its aroma, colour, structure and taste. In the case of the Seikilos epitaph I experimented with several different tuning systems before settling on the rich Ptolemy’s even diatonic scale (track 1) and the more archaic Archytas’ diatonic tuning (track 17). Similar though far more radical solutions can be heard in Harry Partch’s work Two Studies on Greek Scales (tracks 3 and 4).

In the duos featuring the harpsichordist Assi Karttunen, I attempt to adapt my playing to fit the tuning of the harpsichord. Assi Karttunen employs the Vallotti tuning system, first developed in the Baroque period and which uses specific combinations of natural thirds and tempered fifths. Because I know the exact tuning of each note on the harpsichord, I am able to adjust my playing accordingly to suit this tuning. In Graham Lynch’s works for solo guitar I take a creative approach to intonation whereby I strive towards using pure octaves, fifths and fourths, while other all intervals allow for greater experimentation.

The music in your cd seems to create a sort of ideal bridge between contemporary music and music from the past. I sometimes feel that in our time the history of music flows with no particular interest in its chronological course; in our disco-music library, before and after, the past and the future, become interchangeable elements. Could this be a risk for an interpreter and composer of blurring into a uniform vision?

Mixing all existing colors will give a dull gray in the end; Is that what you mean? Thinking about the history of music, I see the music that has survived from Ancient Greece, with all its influences from the East, as a giant, resonant collection of seeds and roots from which the fruits of Western music have grown and developed. On every branch of this imaginary musical tree there can be found individuals, geniuses if you want, able to combine existing elements, colors, in a freshly new way therewith creating something unheard, unseen before. On this recording there is a time span of about 2150 years. Interestingly, the oldest pieces on this disc at times sound more modern to my ears than the pieces composed in this millennium.

How do you express your “musical form” under the aspect of both, execution and improvisation? How did your instruments changed the way you play and think about music?

For every new piece I practice I have to find the right “musical form”, fitting just that particular piece, that particular style. If the piece or style at hand involves improvisation than I have to make that my own as well. I think It’s not so much the instruments, it’s really the people one works with who influence musical thinking.

Crisis, in terms of personal musical development, is just another stage along the road of progress. It marks the point of rising after downfall. In that sense I’ve learned to see crisis as a friend.

What are the essential five discs, always to have with you…the classic five records for the desert island…?

I am soon to record all 48 pieces Maestro Francisco Tárrega edited and published himself during his lifetime. If you study closely his own personal fingerings (which unfortunately where drastically changed and made easier in all later editions) you might at first wonder why on earth he takes so often the hard way and choses almost impossible fingerings. But after carefully studying and making his aesthetic thinking your own as much as possible, a completely logical and extremely sensitive world will appear from behind the notes on the page. It has to do with small things such as holding a barre at points where it is not necessary, but by doing so other strings start to sympathize and prolong certain notes that otherwise would die out much earlier. I found that Tarrega is as careful with his fingering notation as for example Chopin was with notating the use of the piano pedals to obtain the exact kind of resonance he wanted. It’s an essential part of the music that gets lost by simplifying these matters.
Other near future projects are recordings of my guitar transcriptions of William Byrd’s keyboard music, as well as the monothematic fantasies by Jan Pieterszoon Sweelinck. My luthier Uwe Florath is building me a copy of a Collin 1806 guitar. It has a very lute-like sound and he will extend the range by adding a 7th Bass string needed to faithfully play these polyphonic pieces.