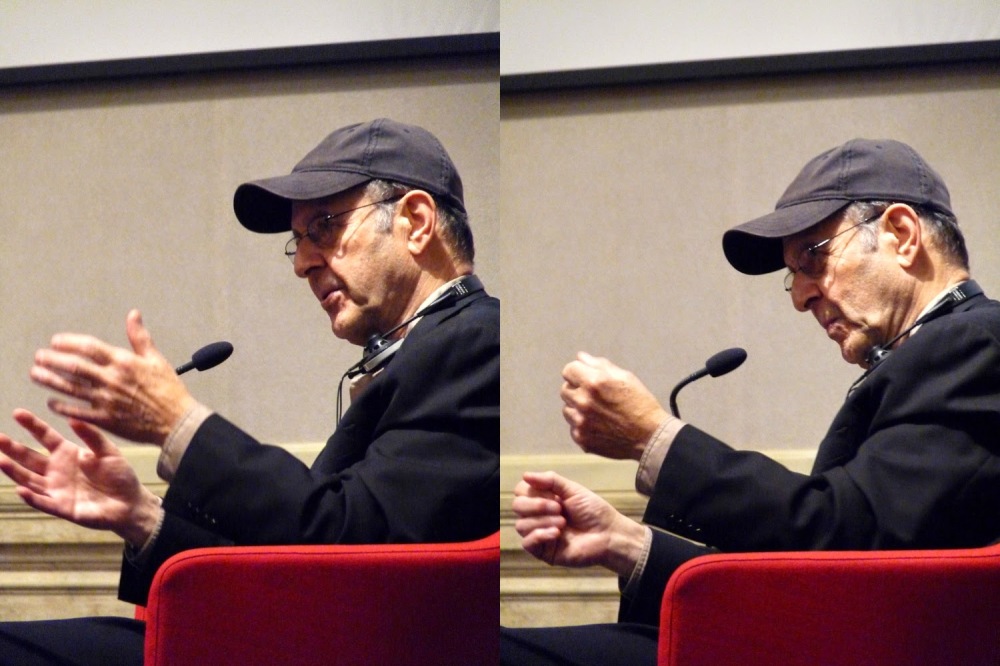 Stephen Michael Reich (born October 3, 1936) is an American composer who, along with La Monte Young, Terry Riley, and Philip Glass, pioneered minimal music in the mid to late 1960s. Reich’s style of composition influenced many composers and groups. His innovations include using tape loops to create phasing patterns (for example, his early compositions It’s Gonna Rain and Come Out), and the use of simple, audible processes to explore musical concepts (for instance, Pendulum Music and Four Organs). These compositions, marked by their use of repetitive figures, slow harmonic rhythm and canons, have significantly influenced contemporary music, especially in the US. Reich’s work took on a darker character in the 1980s with the introduction of historical themes as well as themes from his Jewish heritage, notably the Grammy Award-winning Different Trains. Writing in The Guardian, music critic Andrew Clements suggested that Reich is one of “a handful of living composers who can legitimately claim to have altered the direction of musical history”. The American composer and critic Kyle Gann has claimed that Reich “may…be considered, by general acclamation, America’s greatest living composer”

The arrival at the 2014 Venice Biennial of Steve Reich for the award of the Golden Lion for Lifetime Achievement, a deserved recognition for the incredible amount of work done in over fifty years of activity, stimulated my desire to write something about Reich’s attention to the guitar. I always wondered what Pat Metheny must have thought when in 1987 he received a phone call from Steve Reich asking him for his availability to perform and record a new electric guitar piece called Electric Counterpoint. I always found the choice of Metheny curious, at the time the great Pat was already 33 years old and was well launched to success, for years he was holding the Grammy Awards, in the same year with the Pat Metheny Group would have recorded his best seller Still Life (Talking) and had, a rarety in the musical environment, enjoyed everywhere a solid reputation and esteem, gained with a perfect musical career, an impeccable professionalism, a constant search for new expressive and technological solutions and a series of magical records like 80 / 81, Song X, First Circle first and Zero Tollerance for Silence later. 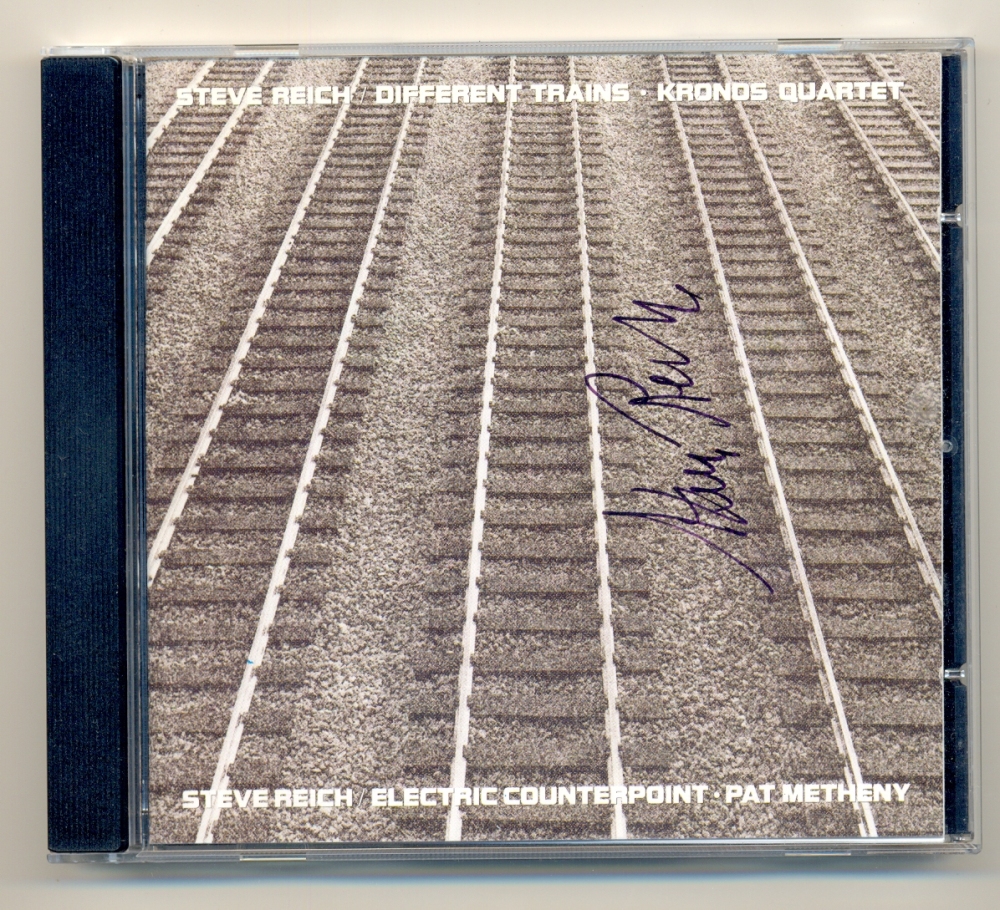 So nothing to complain about this professional choice: a musician like Metheny, with his professionalism and experience would certainly have had no problem interfacing with the geometry and the minimalist Reich’s process. In addition, Reich has always had a considerable interest in jazz and it is therefore possible that he moved in this area for the research of a musician able to better interpret his music, even if this was still distant from the cultural environment that Reich habitually frequented at the time.

In the book written by Luigi Viva “Pat Metheny Una chitarra oltre il cielo”, the guitarist recalls the event in more than enthusiastic terms: “It was a fantastic experience. Steve is one of the greatest American composers of this century. Paying attention to the guitar and calling me, I was very flattered.” I think we can still say that it was a happy choice. The three movements “Fast,” “Slow”, and “Fast” (for magnetic tape with recording of two electric basses and seven guitars) were recorded on the Different Trains disc, along with the homonymous track recorded by Kronos Quartet, on Nonesuch Records.

Actually Reich had also made a second version for guitar ensemble that was recorded in 2007 by the guitar ensemble Forestare on ATMA Classique. It’s a very interesting version, that performed in ensemble gains an opening of sound and a breath that enhance its counterpoint structures.

Another beautiful version was performed by the Santa Cecilia Conservatory of Rome under the direction of Arturo Tallini. Arturo Tallini has also repeatedly played a very personal version of Clapping Music for guitar.

For the guitarists who want to play this piece, maybe live, there are two possibilities: use the base recording made by the same Metheny and made available by the Reich or recreate the base through an intense work of overdubbing in the recording studio, then playing live the solo guitar part In the booklet of his cd “StrongStrangeStrings”, released in 2006, where this passage was recorded, Elena Càsoli reiterates his personal vision of this song: “I always live the experience of a tape as a virtual duo with another musician … in the execution of the solo part, I did not want to be an interpreter that intervenes further in the piece, but a performer who lets himself be carried away by the mechanism. I participate in the counterpoint, I insert myself and I am part of it, I can not and I do not want to influence it anymore, because the mechanism is already given. “ 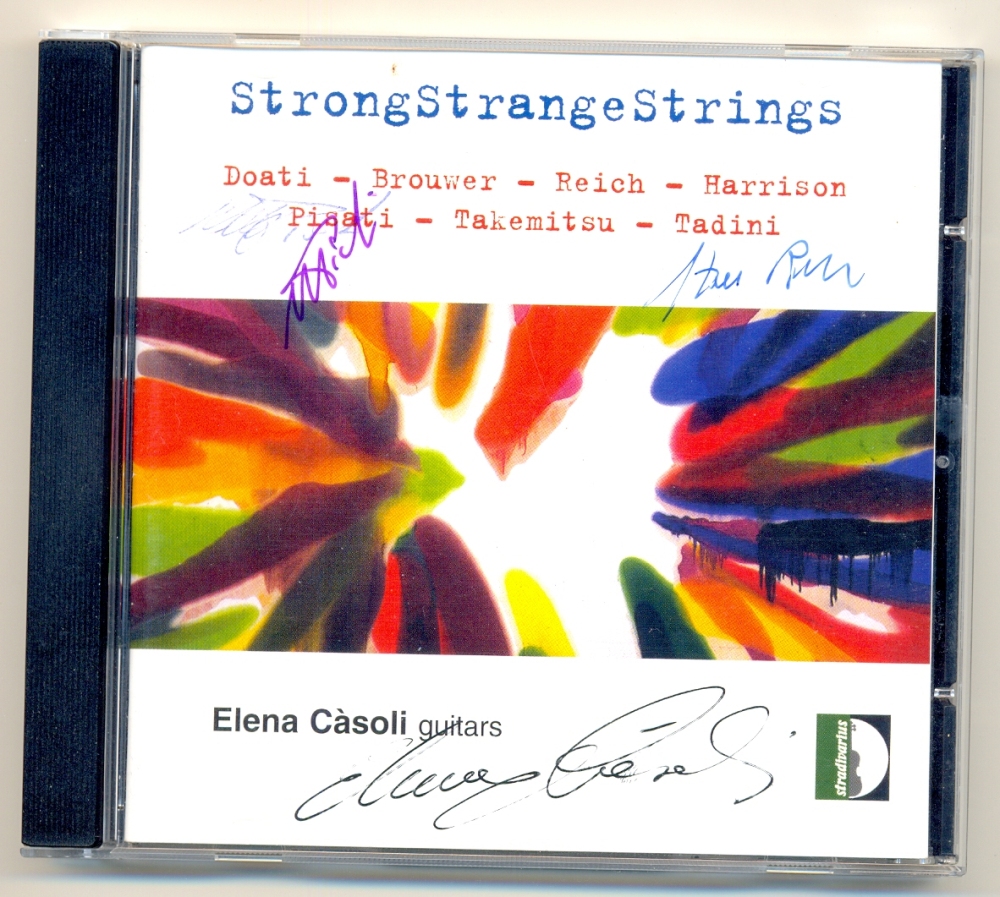 Over the years this piece has begun to garner an increasing interest from guitarists all over the world. In 1990 the American guitarist David Tanenbaum recorded a beautiful version for classical guitar in his album released for the New Albion Records. 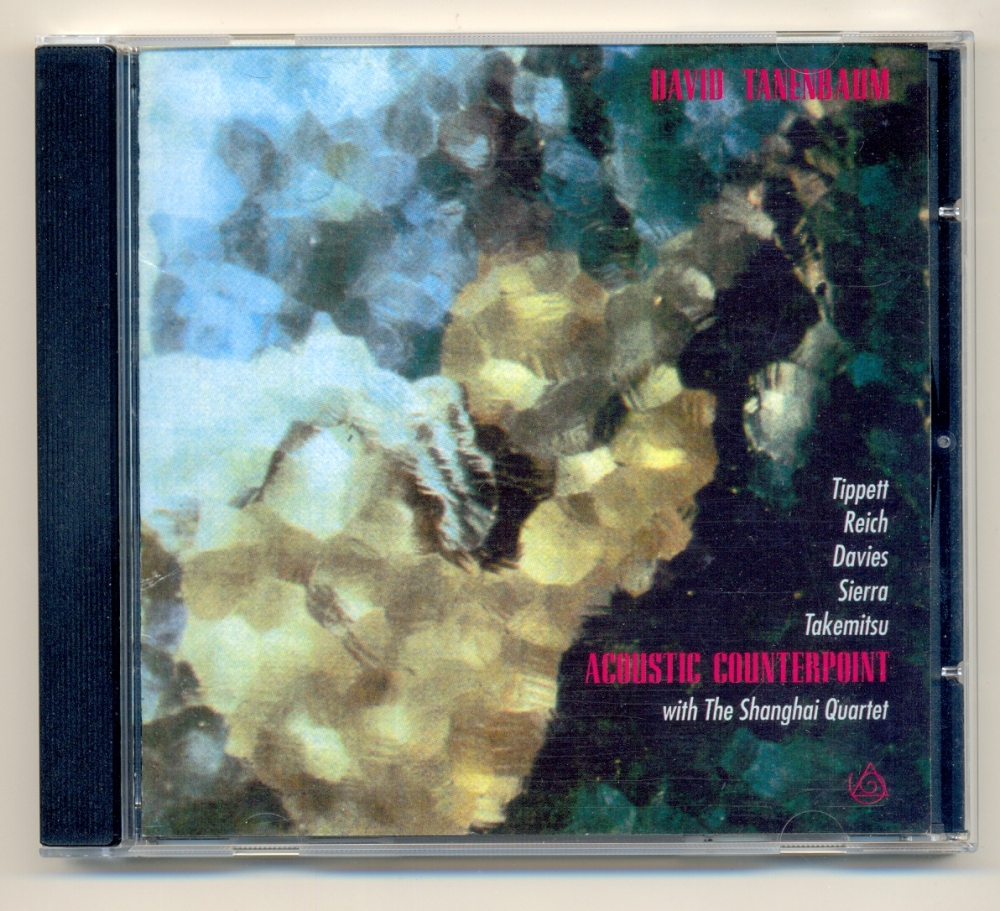 Tanenbaum writes in the booklet that accompanies the cd “One of the great strenghts of Reich’s coounterpoint series is its flexibility … for the first completely acoustic rendition fo the piece, I used a 1983 Dieter-Hopf contra bass classical guitar for the bass … it’s larger than a standard classical and tuned an octave lower. “

In 1994 the Hungarian guitarist Tatjana Kukoč, again for classical guitar, published for the record label Edition his own version. 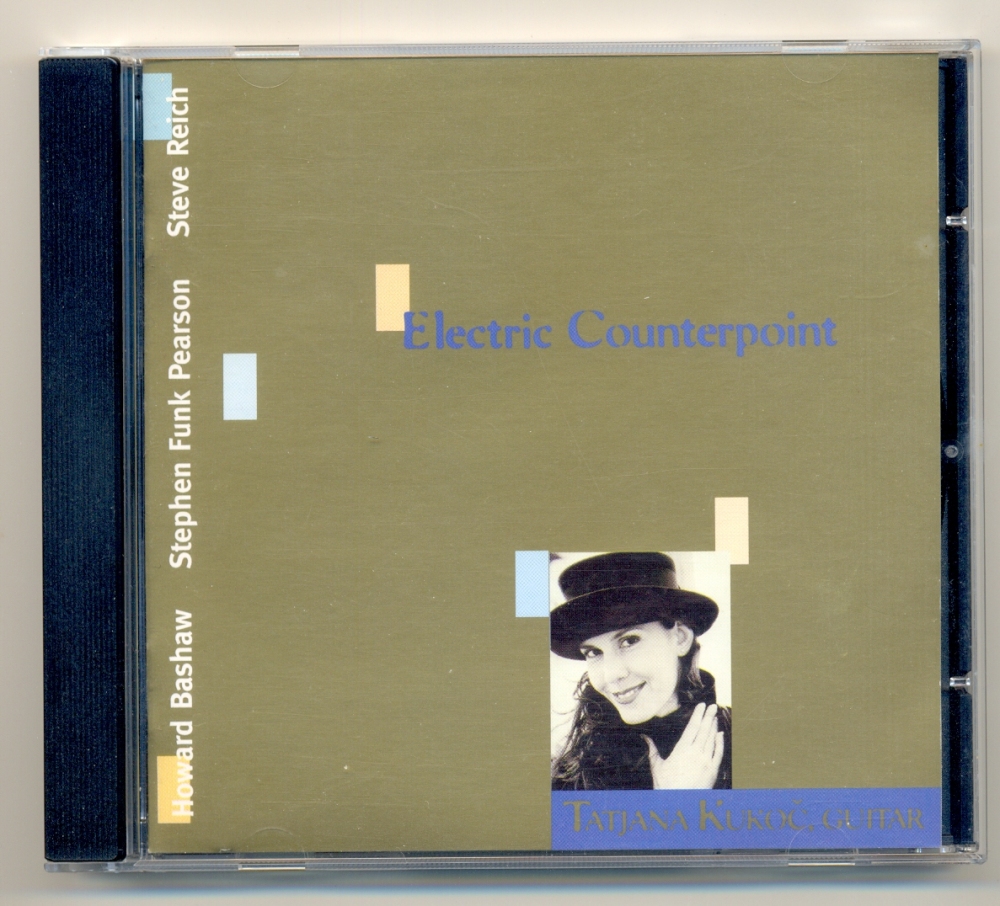 Another interesting version was created by Marco Cappelli in 2002, in his album Yun Mu recorded for the label Teatro Del Sole, where the base was made using the extraordinary collection of ethnic instruments of his first teacher Gino Bufano.

The result is a version where the geometric and rigorous taste of the Reich structure is completely lost in favor of a mariachi party. This version has obtained, after an initial perplexity, the applause of the composer himself, pleased to hear a version so original and far from his canons. 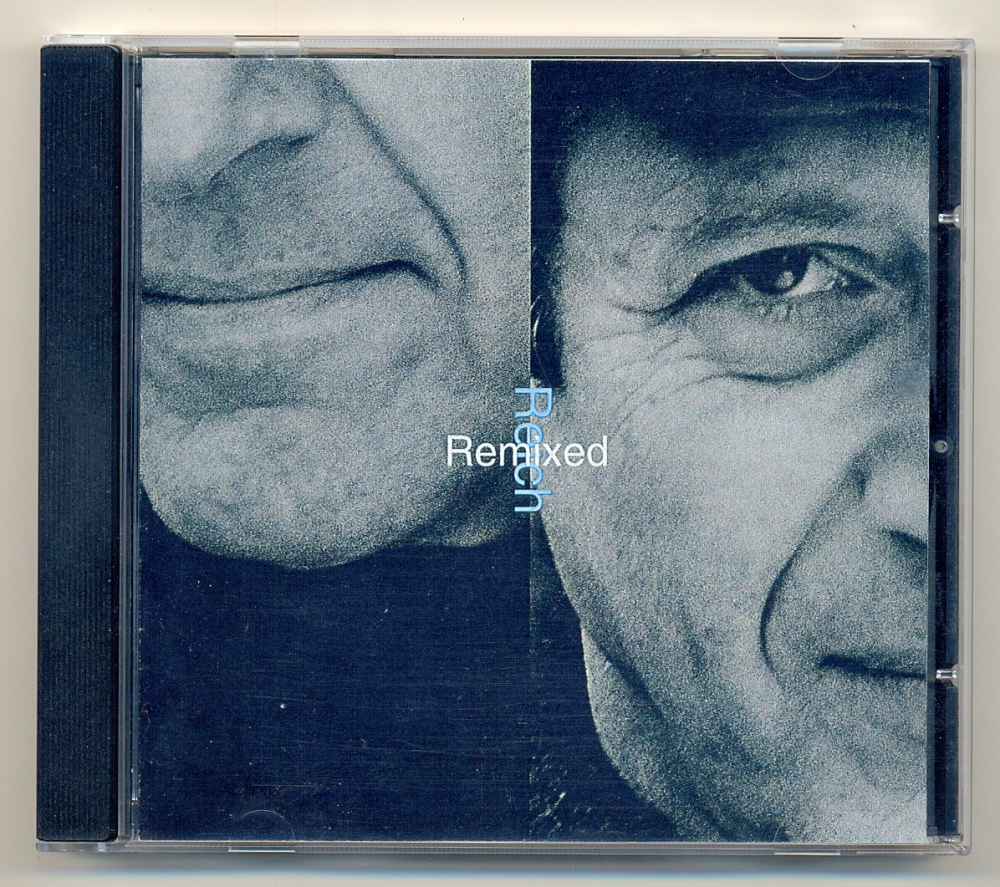 This piece has also been successful in other areas, not just guitarists. In recent years there have been many DJs who have paid their respect and interest towards the minimalist New York master. In 1999, exponents of the electronic scene as DJ Spooky, Kurtis Mantronik, Ken Ishii and Coldcut gave an interesting tribute to the master with their reworkings of different pieces of Reich in the album named Reich Remixed featured.

Even Electric Counterpoint has not escaped the ears of the best DJs: a few years before, 1990, the Orb had used some samplers of the third movement in their song “Little Fluffy Clouds”, opening their ears to the Reich’s sounds to a new pool of listeners. The thing, in fact not authorized by the author, created some initial legal disaffect that was then arranged amicably. The Norwegian duo Röyksopp remixed the third movement making two versions: “True to Original Edit” and “Milde Salve”.

It’s not enough. Electric Counterpoint III Fast is also present in the videogame Civilization V. Just enough to define this piece as an example of viral success, an unexpected thing for a piece of contemporary music.

A passage like this would be enough to definitively confirm the best guitar sympathies towards Reich, but the story does not end there. In 1994 David Tanenbaum arranged for two guitars the piece Nagoya, originally composed for two marimba in 1994, in his album “David Tanenbaum” of 1997. The idea of the transcription came to the American composer Aaron Kernis, after listening to the piece in concert performed from the marimba. Tanenbaum realizes a version by raising the original intonation of a fifth, but still keeping the score intact. In the booklet that accompanies the CD the American guitarist said: “I ended up lowering the original pitch a fifth but otherwise translated every notes literally. I then added some slurs and harmonics as well as fingerings to exploit the guitar’s possibility.” 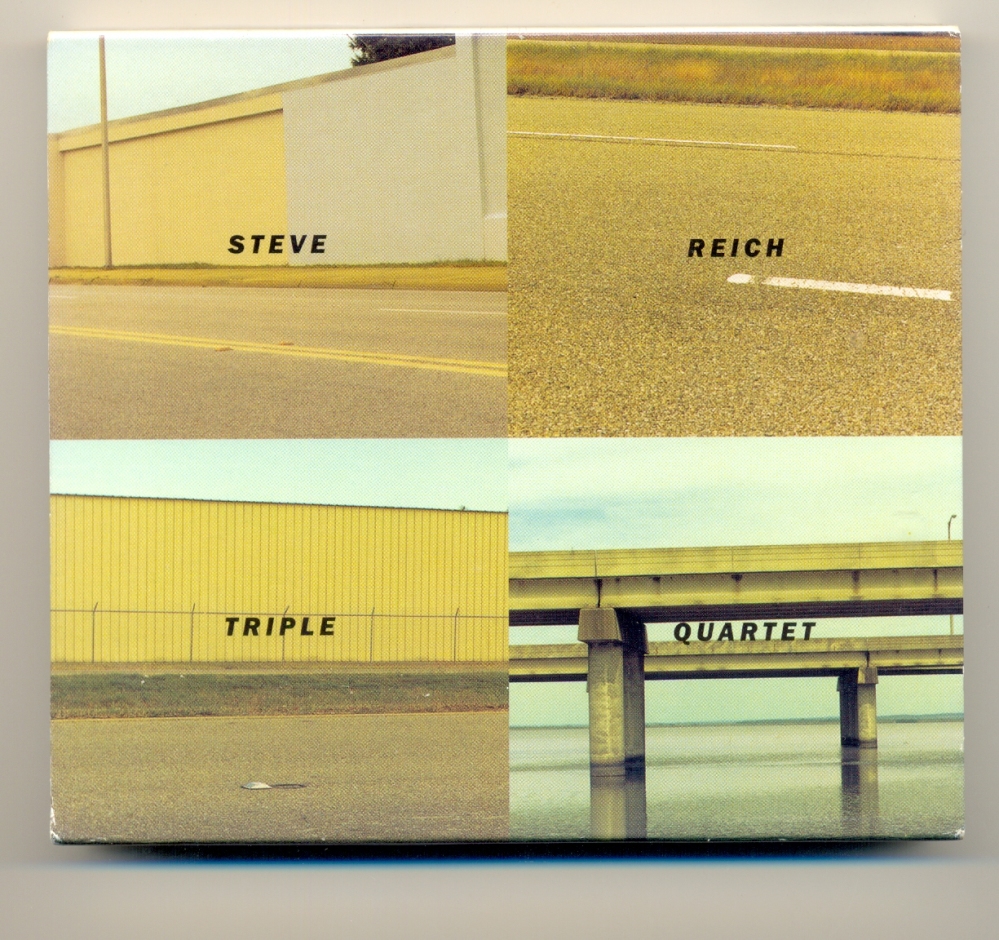 In 2001 it was released the record “Steve Reich Triple Quartet” was released by the eternal Kronos Quartet and other artists, including the New York guitarist Dominic Frasca who, in the role of performer, arranger and producer, realizes “Electric Guitar Phase”, one of the “phase pieces” of Reich, an arrangement for electric guitar and tape (or for four guitars) of the 1967 piece Violin Phase. A perfectly successful operation: Electric Guitar Phase sounds like a totally new and enchanting piece in its energetic electric charge, with the guitars slowly sliding into the phase shifting so that the lead guitar finds itself eight notes ahead of the tape or the others.With respect to the original version, the use of the electric guitar strongly highlights these progressive rhythmic and chromatic changes due to the more rhythmic attack with respect to the violin. 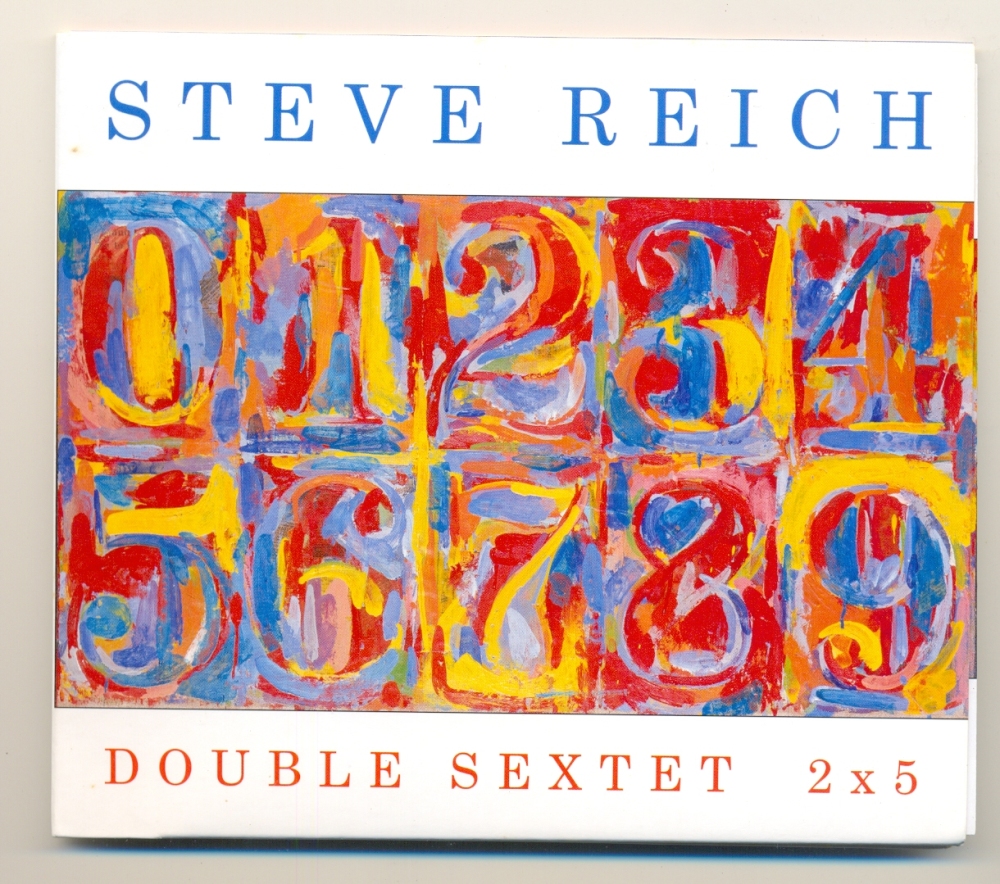 2010. It was released “Double Sextet 2 X 5” and Steve Reich returns to the electric guitar, in this case the guitar played by Mark Steward of the New Yorkers Bang on a Can. “What happened with 2 X 5was, I wanted to write for rock instruments, and particulary for the elctric bass, believe it or not. “ nd the result is a truly remarkable piece. Reich in the cd booklet, explains how during the interaction between his music notation software and the sampler the guitar part had gone out, it sounded a higher octave. “I checked with Mark Steward, and we both agreed that these chords, which were ringing out bell-like sounds, sounded great. He said “Keep it that way!” and I said , “Fine, Mark, but it’s not going to be possible to play” and he said “Don’t worry, we are going to use an octave transponser!” [laughs] And they did. Cleary 2×5 is not rock and roll but use the same instruments.It’s an example of the essential difference between classical music and popular music. And that essential difference is:one is notated, and the other is not notated. I had to find musicians who (A), could read, and (B), had a genuine rock feeling, and there Bang on a Can excels.”

2014 Steve Reich is back with a new record: “Radio rewrite”. And here we can find another version of Electric Counterpoint played by Jonathan Richard Guy Greenwood, Radiohead’s guitar player…and the story goes on…