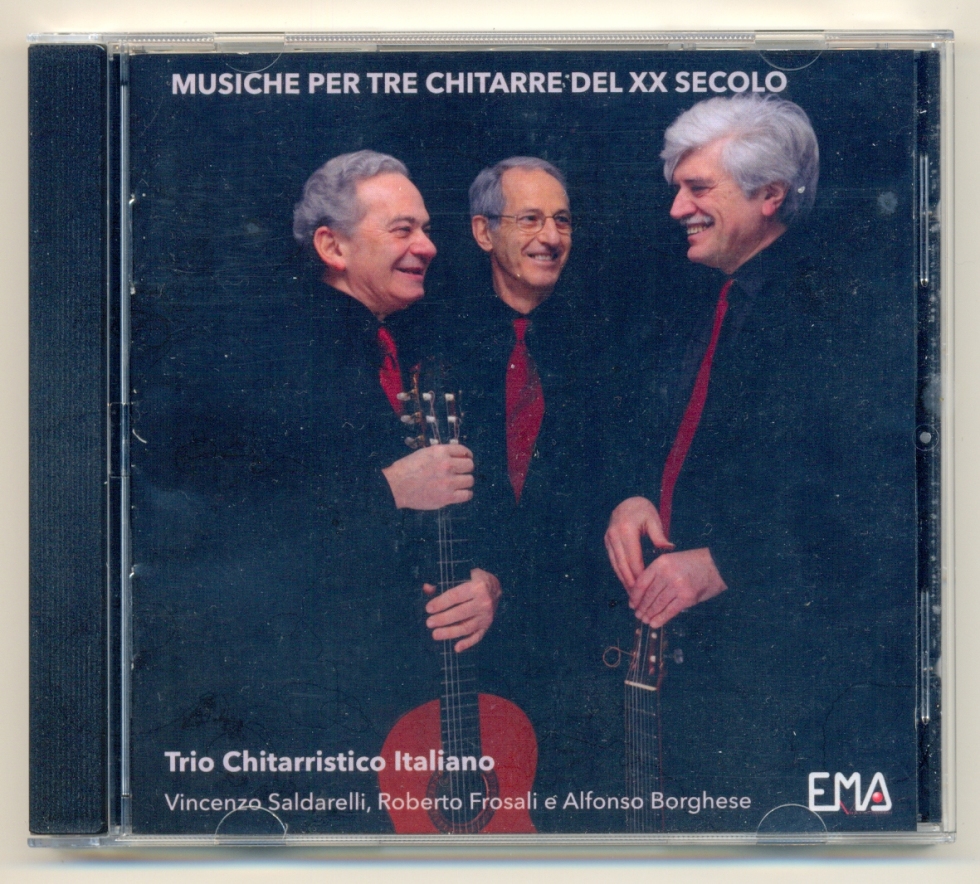 The Trio Chitarristico Italiano (Alfonso Borghese, Roberto Frosali and Vincenzo Saldarelli) was the first group of three classical guitars to be established for a stable activity, debuting in 1970. Combining their personal experiences, these three musicians (all students of Alvaro Company) created an entirely new artistic proposal, with the rediscovery of a completely unknown part of the literature for lute and guitar from the Renaissance, of the twentieth century and with a great attention to the contemporary repertoire. During their almost fifty years of activity, in fact, many composers, fascinated and stimulated by the unusual sounds and expressive possibilities of the new guitar trio, created for them new compositions, preparing a new repertoire for the classical guitar. Composers such as: Bruno Bartolozzi, Arrigo Benvenuti, Sylvano Bussotti, Alvaro Company, Aldo Clementi, Francesco Pennisi, Aurelio Peruzzi, Carlo Prosperi, Lawrence Singer, Reginald Smith Brindle, Lorenzo Ferrero, Andrea Talmelli and Ennio Morricone. 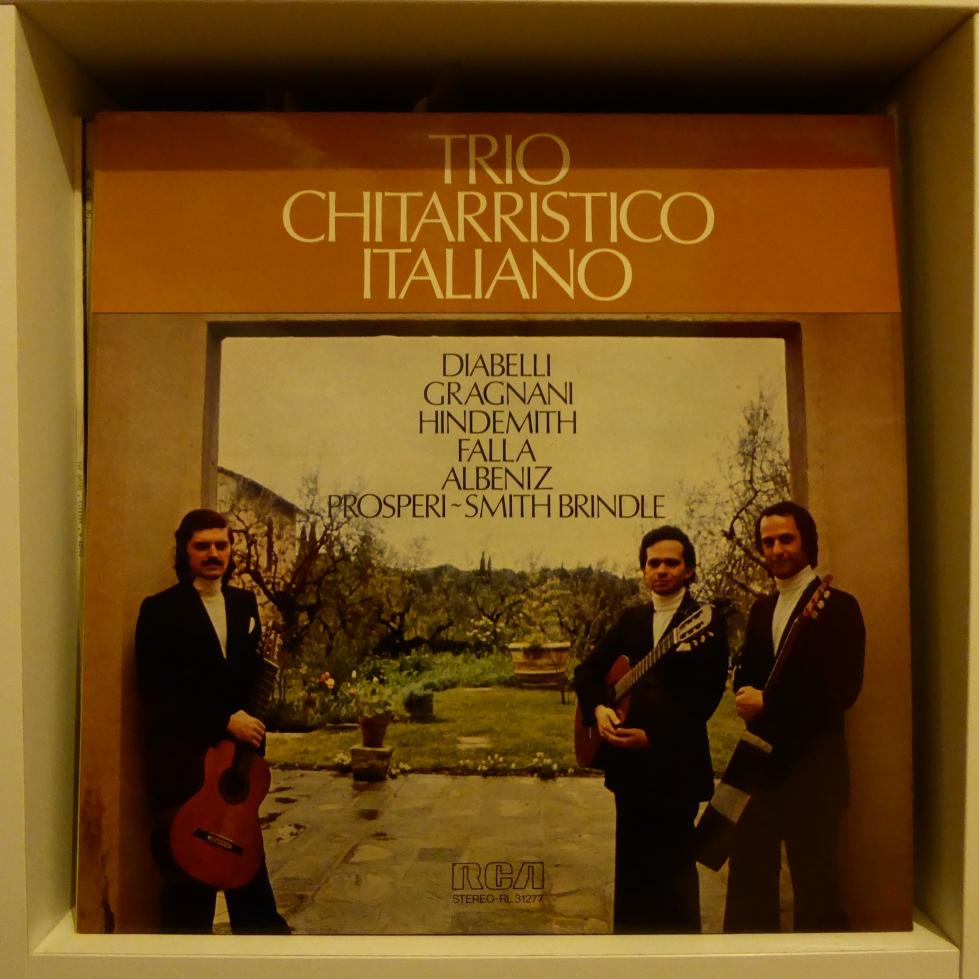 As evidence of this commitment, in 1977 was released a record for the Italian RCA: TRIO CHITARRISTICO ITALIANO DIABELLI – GRAGNANI – HINDEMITH – DE FALLA – ALBENIZ – PROSPERI – SMITH BRINDLE, with the following tracks: 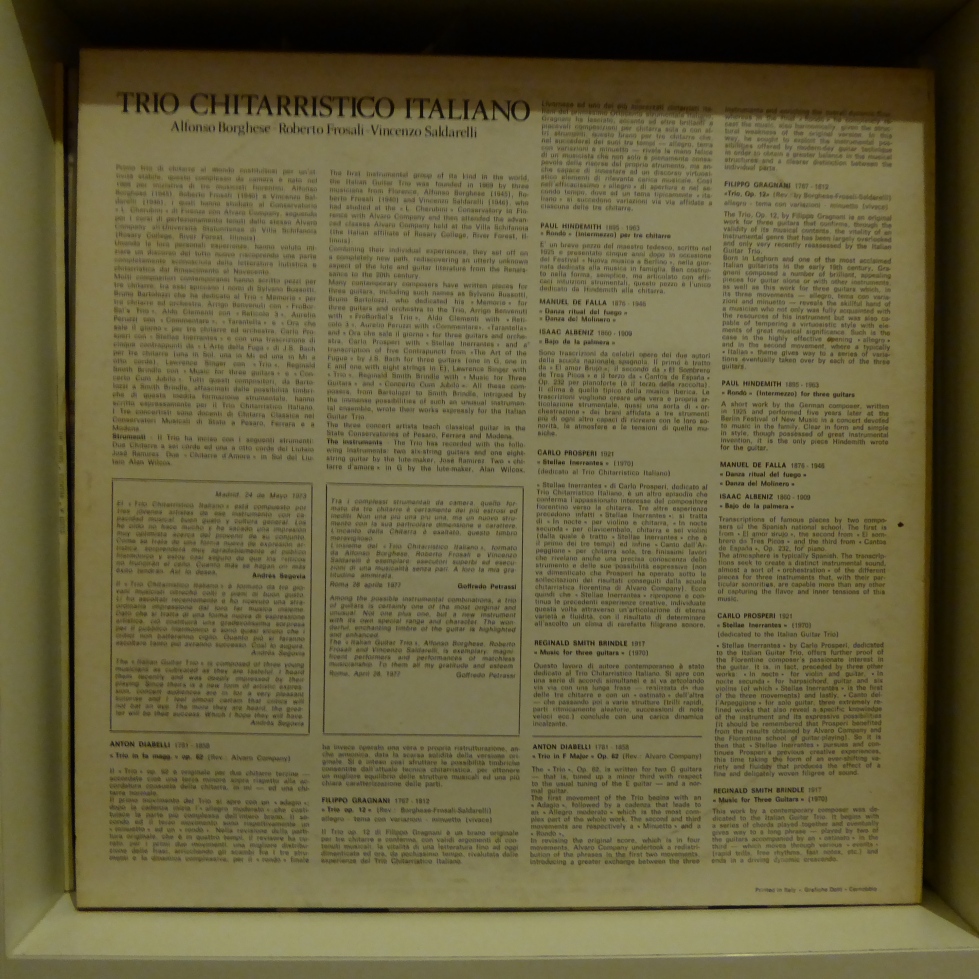 This was an excellent job, perfectly in line with international standards and certainly one of the first recordings for classica guitar trio, especially for contemporary music, which draws on the works of the “Schola Fiorentina”.

If the three Ferdinand Rebay’s pieces, taken from the Six variations on Alles neu mach der Mai, Kleine Elegie and Lustighe Alt-Wienner Weisen, are a sort of farewell to the now-faded Vienna of the XIX century, all the rest of the repertoire fits into the most innovative currents of the twentieth century. To confirm the continuity with the work of 40 years ago we find the “Rondò” by Paul Hindemith, the “Music for three guitars” by Reginal Smith Brindle and the “Stelle inerrantes” by Carlo Prosperi, who can here enjoy the best audio quality of the CD. The remaining pieces are all new compositions and “first world recording”: the FroBorSal’s Trio by Arrigo Benvenuti, “Tre studi per chitarre” by Ennio Morricone, the “Fuga a tre chitarre” by Alvaro Company and the “Graffiti Danzanti” by Andrea Talmelli.

I could not resist drawing a line of continuity between the 1977 LP and this CD released forty years later: the Trio Chitarristico Italiano has been able to maintain a remarkable integrity and artistic coherence, demonstrating their total commitment to music. Two beautiful works for those who care about new musical realities.