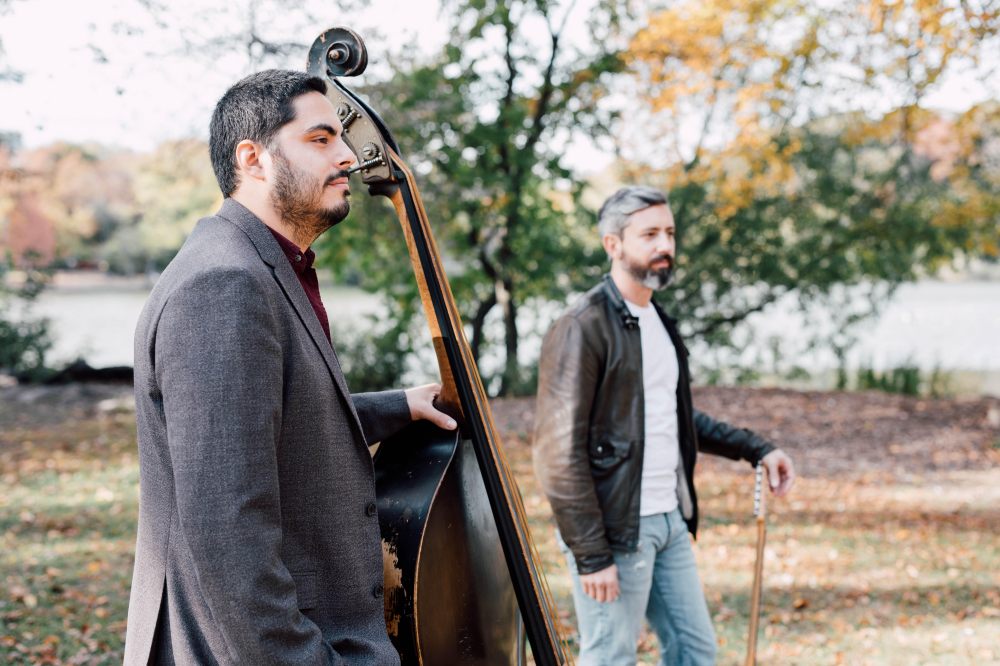 How did you meet and how did start the idea to create your Duo?

Nico Soffiato: Zach and I met through mutual friends and we are both active in the same musical circles. We met the same way a lot of musicians meet in New York. Then we played a couple of duo sessions and we hit it off. I am particularly fond of the duo format and have another long-standing duo project with trumpeter Josh Deutsch. Zach and I really liked the way the tone of our instruments blended together, from a timbre perspective, and how our improvising approaches worked well together. So, we decided to play some more and write some pieces specifically for the duo format.

How did start the idea to record your last cd “Hecate’s Hounds”?

Zach Swanson: Recording our album Hecate’s Hounds was the natural next step once we had been playing together for a while and had material to make a record. Both Nico and I had similar thoughts about the recording process, we wanted to capture the natural exposed sounds of our instruments as if the listener was sitting with us while we play. We ended up recording at Big Orange Sheep in Brooklyn, NY with Michael Perez-Cisneros, an engineer with whom Nico has worked in the past, and everything was done live in the same room with a pretty minimal set up–just a few microphones and us. We played through our material as if we were performing a concert, essentially playing through a set twice. Leading up to the recording, we had some broad big picture ideas we were looking to explore while keeping the material fairly open and exploratory.

How would you define your music on this cd?

Why did you choose the Italian independent label nusica.org?

Nico Soffiato: I have known Alessandro Fedrigo, who runs the label with Nicola Fazzini, for a long time. We worked on some music together before I moved to the US and my first record came out on another label he was running a few years back called nBn. We’ve always kept in touch and kept an eye on each other’s careers and discussed projects and what’s going on in the musical scene in Europe and the US. I really like the work they’re doing with the label nusica and I’m happy that they chose to publish our album. Nusica.org is not only a label, but they organize shows, seminars, workshops, festivals, so it’s great to be a part of all of this.

What is the situation of the musical scene in USA and New York? Is still New York interesting for music artists who want to create something new?

Nico Soffiato: I can only really speak about the music scene in New York, just because that’s where I am. I know that the New York scene is one of the biggest, if not the biggest, along with LA, Nashville, Chicago, San Francisco. I’ve lived in Brooklyn for about 11 years and I still find it extremely stimulating. There is just everything, all kinds of music and just an unbelievable wealth of musicians and possibilities to play and collaborate. There are also a lot of venues where you can play and listen to all kinds of stuff. I think it’s important to have places where you can work out your music and try things. As an improvised music/jazz player I find this crucial to the development of new ideas, projects, bands, etc. So, it is a very interesting scene. As far as the viability to be a city where you can create, I sort of changed my mind a bit, or at least it’s not as conducive as it used to be 8-10 years ago or before I moved here. The main reason is that it’s getting very expensive. Musicians have to work a lot to make ends meet, whether it’s playing all kinds of gigs, teaching, having a day job, etc. I see that people have less time to set aside and play, write together, and just talk about music and listen. It’s just my opinion and I’m sure other musicians may have a different take on it, but it’s undeniable that the city has gotten very expensive.

Zach Swanson: Improvisation is at the core of my work, ranging from completely freely improvised music, merging composition and improvisation (like Dogwood), or even in contexts such as folk music there is room for improvisation as a primary element. Fundamentally I’m trying to express a unique personal voice through improvisation that is fluid and translates to a range of settings and collaborations. As a composer, I hope my written material will be able to stand alone without the aspect of improvisation –while also giving the framework for a meaningful improvisation to develop.
Lots of jazz education has revolved around codifying what seminal artists have done, there is certainly some value in that though for me the ultimate goal is developing a personal voice–so looking at jazz improvisation through lens of creating something specific to you can alter how you intake that information (as an example, what one is hoping to gain from a transcription). I also don’t want to limit myself to one type of source, often when the word improvisation is used we automatically think of jazz, though improvisation is such a large aspect of so much music from around the world (including some very ancient musical traditions). It can be very rewarding to check out these other areas of improvisation as a means of inspiration as well.

Zach Swanson: In my tune Mistake/Headache I used a serialist technique to compose the written portion of that piece. After I was done I realized I made a few errors in some of the series which subsequently affected all the remaining material from that point on (and therefore ruining the serial formula, hence the name Mistake/Headache). In this case I decided to leave these errors as part of the composition, since my goal was not to compose a piece that neatly met serialist standards but rather to use serial devices to arrive to material that I wouldn’t ordinarily come to, which I think was still accomplished.
As it relates more generally to improvisation and music, making errors can be a result of many things–hopefully it is from taking risks rather than being unprepared! If the options are take chances and possibly make an “error” or make conservative choices and give a safe performance, the bigger mistake would probably be going the safe route. Not all errors have to be a bad thing, errors can also lead to new developments and techniques, as we try to refine and capture the essence of a sound that inadvertently jumped out at us.

Zach Swanson: Musically speaking, this could be a lot of things–perhaps it’s a moment in a complex composition where everything is really going off the rails unintentionally, at that point you can either go with it and embrace the chaos, or try to right the ship and double down a specific part to try and provide a steady framework for others to latch onto. Those decisions all really depend on the context, as either of those could be appropriate options. In a broader sense, moments of crisis have often lead to great art throughout history, whether listening to “With God on our Side” by Bob Dylan or Max Roach’s “Freedom Now Suite”–there are lots of examples of transcendent art that are not only powerful commentaries, but brilliant works in any context. Personally, I tend not to frame any of my work in a specifically political context, though at the same time it seems that improvisers are naturally affected by their surroundings and in that way any outside influences may affect one’s work.

Nico Soffiato: We are currently still working on promoting this album, we just finished a series of concerts in the New York area and are now planning some shows in Italy for the early summer. We are playing at Sile Jazz, a festival organized by nusica.org. The plan is to keep playing together and keep writing material for the duo until we have enough for a new album.