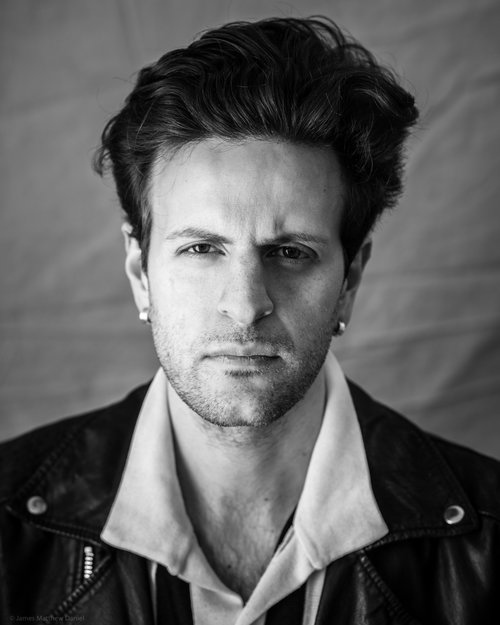 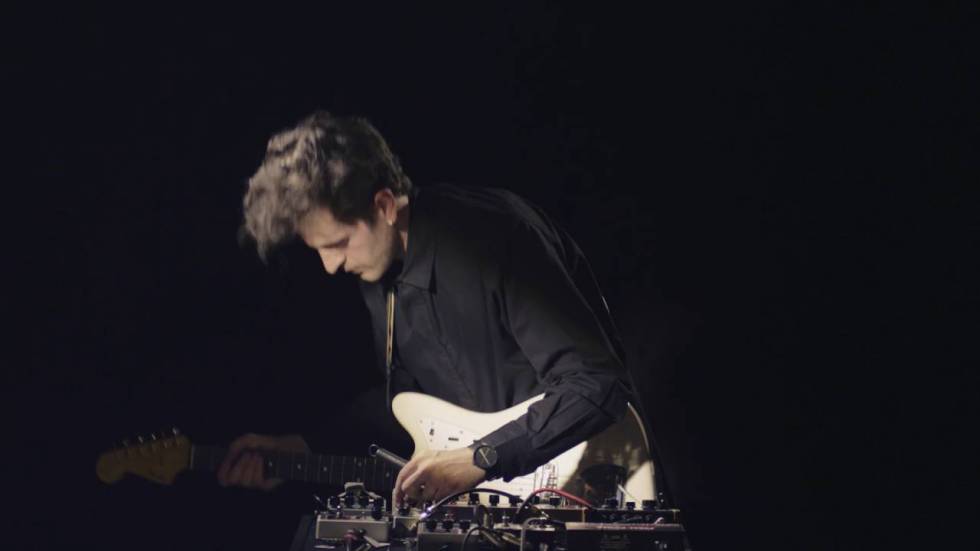 Dear Matteo, welcome to the blog Neuguitars and thanks for this interview. How did you start being interested in the guitar?

Thank you Andrea for this opportunity and for the invaluable work you do for our community.
I started playing when I was 14. I was hanging out with my friends and we were joking about starting a boy band and I suggested it would be more fun to play real instruments. I wanted to play the drums, but my friend wanted to play them more than I did, so I said: “fine I’ll play the guitar”.

You started out as a classical guitarist. What brought you to jazz and free improvisation?

Back then, going to the conservatory and playing classical music was the only option available in Italy if you wanted to have any sort of official musical training. We didn’t have music in high school, let alone public colleges that offered programs in jazz and modern music. I always knew classical guitar wouldn’t be my ultimate form of expression, but now I am glad I studied it, it gave me a lot more than I credited it for at that time. 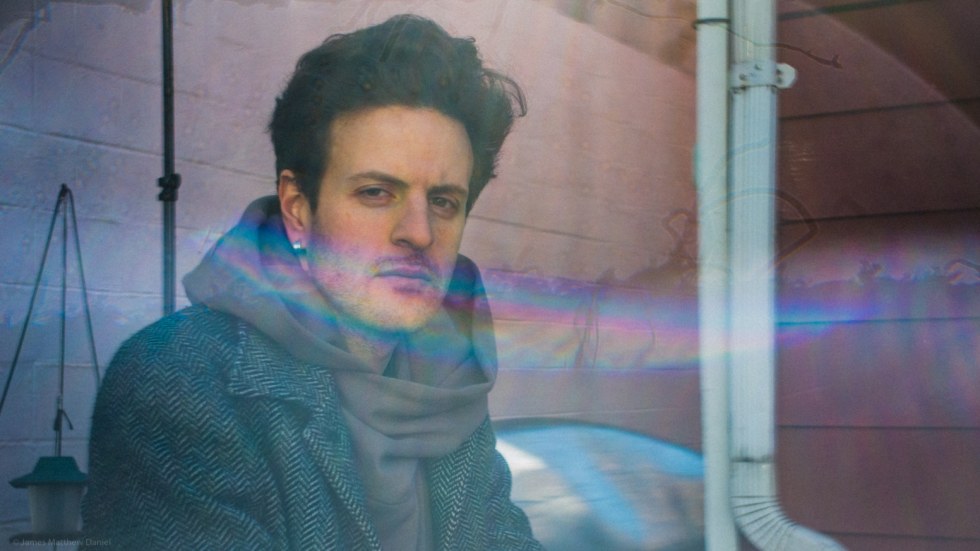 With Jazz I have always had a “cerebral” fascination rather than full out love. I began studying jazz in Italy right after finishing the conservatory and then I moved to the U.S. for a Masters in Jazz Performance at NYU. It was great to be there, but I still didn’t feel I could really express myself in a jazz idiom. It didn’t feel like my “musical voice” and I felt a bit like an impostor.
Then one night, during my first winter in New York City, a friend of mine brought me to The Stone to listen to Marc Ribot’s Ceramic Dog. That changed everything: I realized I could do anything I wanted with music.

What guitars do you use or have played?

For many years my main Jazz-Rock guitar was a Gibson ES-333. That guitar felt so “right” and comfortable. However, over the years, as my playing evolved, I fell a bit out of love with it. Last year has been very important with regards to my instrumental evolution: I started experimenting more with Prepared Guitar and realized how much old vintage guitars responded to my playing style and aesthetic. I found an old Harmony in a pawn shop and recorded my first solo album with it.

I currently play a 1930s Gibson L-50 for my acoustic shows, and lately I started using a 1965 Danelectro Convertible for the louder gigs. The L50 is extraordinary. It doesn’t have that metallic tone that some archtops have. It’s very earthy, sharp, focused, just so much vibe. It’s a bit quiet, but I amplify it with a clip on microphone and a contact mic. This way I can retain the acoustic qualities of the guitar while amplifying gestures and percussive sounds that wouldn’t be captured by a regular pick up. 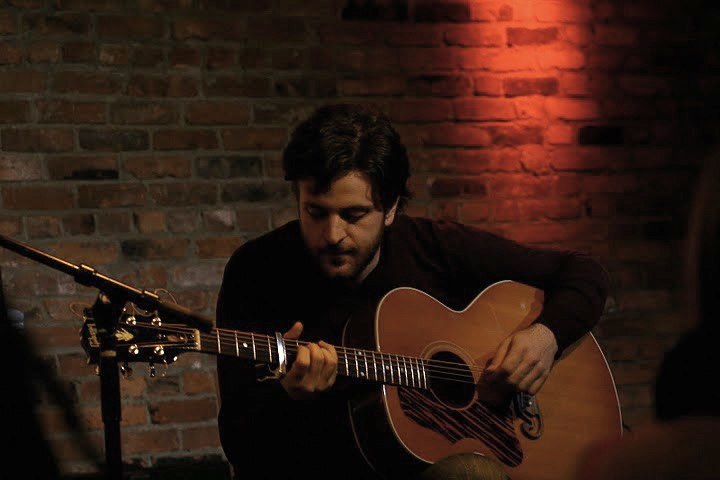 The Danelectro has possibly changed the way I approach improvised electric playing. I used to play with lots of effects, but always felt constrained by them; I wasn’t digging the pure ES-333 tone anymore as my guitar playing was developing towards a more sparse, acoustic approach. I played the Danelectro at a music store and it just felt right; I bought it and ditched the pedals altogether.
I still use the 333 for more “electronic” gigs, where the guitar tone is completely altered by effects. In those scenarios that guitar shines.

What effects do you use?

I use a lot of pedals in what I call my “electronic” setup: Ring Modulator, Stereo Delay, Freeze, Flanger, Fuzz, Granular Delay.

For the acoustic/electric setup, which is what I use almost exclusively for improv gigs now, I only use a Volume pedal, Compressor and Overdrive. Of course my tone is always developing. Two months ago I recorded a video with a dancer where I am only using a combination of volume and stereo delay pedals; I just loved it. The sound filled up this giant rehearsal space, bouncing off the walls. It was pretty epic. 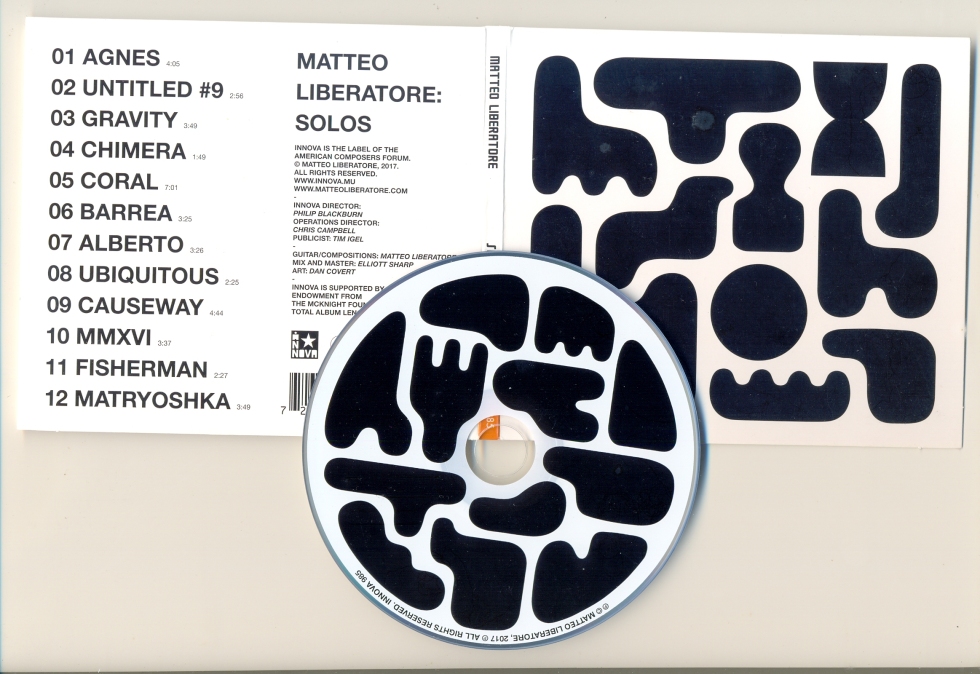 Where did you get the idea for a unique album like “Solos” and why did you choose Innova as a label?

Last year, while experimenting with Prepared Guitar and my electric guitar/pedal rig, I made some recordings, but it didn’t sound right. A studio album is different from a live show. Without the visual component, the music I was making lost a lot of impact. So I stripped down my setup and started using an acoustic guitar with a few objects. It felt right. The acoustic has a stark, pure tone, and it responded well to the way I was playing it. Plus, without using electronics, the material started sounding more like contemporary classical than electronic music. Sometimes sonic choices really take you out of a genre and throw you in another one without even changing the music. 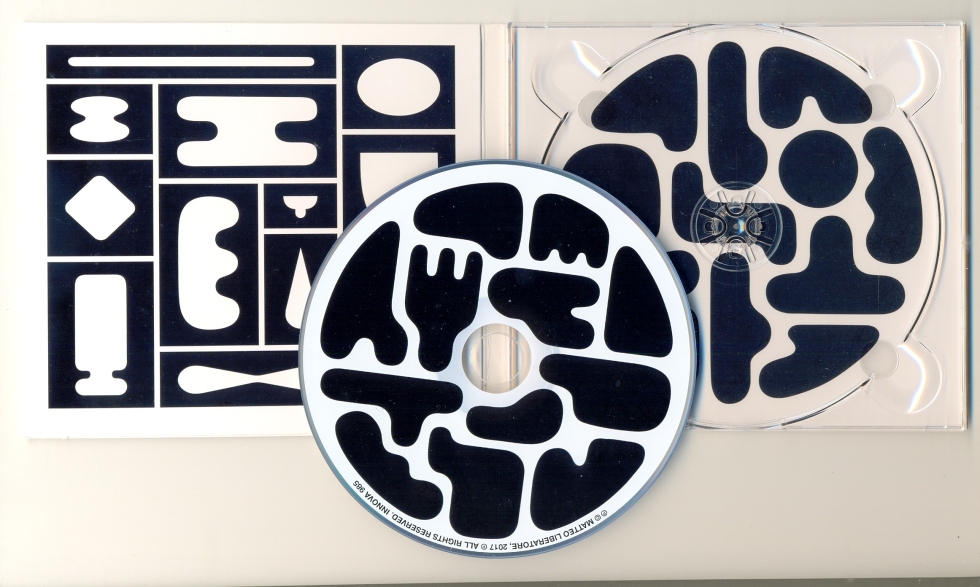 Innova seemed the right label for Solos because they are open to music that falls in between genres. In this particular case, we can say my music falls loosely between “free improvisation” and “contemporary classical” music. Plus, they are really great people that care about your music.

What meaning does improvisation have in your music practice? Can we talk about improvisation in classical music or do we necessarily need to look at other forms of music for that?

When Morton Feldman began notating his music, leaving the chance practices that characterized his earlier work, John Cage said, no worries, Feldman is just playing chance music with himself before writing it down. I like that thought.
Improvisation is what I cherish the most in my own practice, I work on it everyday. I live for that immediacy that only improvisation gives you.
I would say that if you wanna hear the most advanced forms of improvisation, you shouldn’t look at classical music. Anybody can “improvise”, but Improvisation with a capital “I” won’t be found in classical music.

What is a mistake in your music vision?

I used to be terrified by mistakes: especially when playing classical guitar. Now, it doesn’t affect me too much. I can’t say I mindfully practiced “acceptance”, it just started happening with time and age; especially while improvising freely. I would play something I wasn’t expecting, and think: “all right, let’s play that thing again”. I realized that it didn’t matter what I was playing, as long as there was commitment behind it (and when in doubt, just play it loud, people will think you really meant it!). 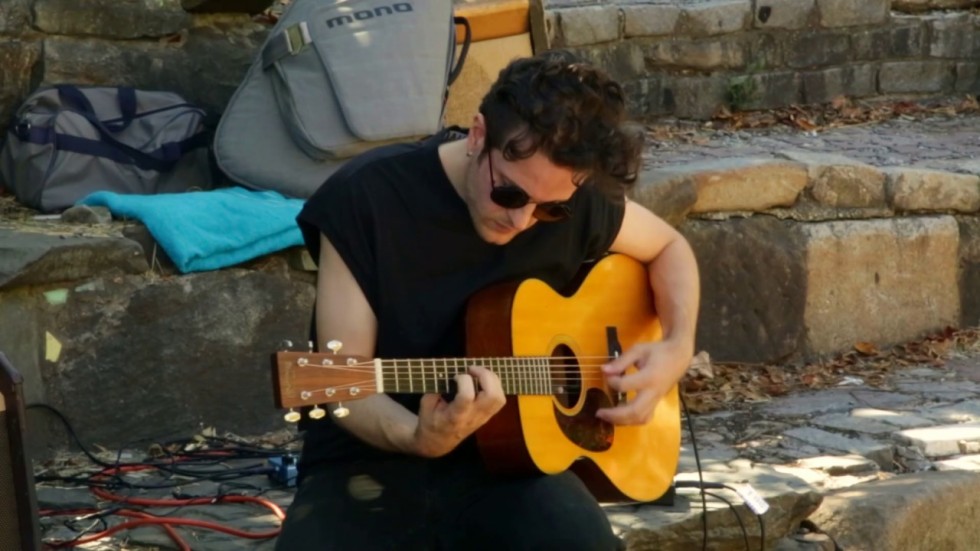 What is the importance of a moment of crisis? I ask you also considering the city you live in…

New York can be rough. It’s a constant push to move forward. You can feel it on your shoulders, the weight of the city. Everybody is here: all these incredible musicians with unique voices; New York can make you feel tiny. Plus, I have no family here; I had to create a support system from nothing. But when I go over the WIlliamsburg bridge on the M train, I see the city, I feel nothing but gratitude for being able to live here.
The NYU head of the jazz program once told me, people stay in New York for a decade without figuring out who they are and how they wanna play. I am approaching my 10th year here, and I just now start feeling like I am figuring out myself and my playing. It can take a lot of time. There is a lot to absorb here. I have had moments of crisis, not musical in particular, but emotional. You get through it and it leaves you something. Sometimes I say, it’s easier to be sad than happy. Happiness takes work. Crises are needed to make you ask yourself: what am I doing wrong? How did I get here?

What are your five essential recordings?

This is a hard one for me, since I tend to obsess over music for short periods of times:

Umanamente Uomo: Il Sogno by Lucio Battisti
Dead Cities by The Future Sound Of London
Triadic Memories and Rothko Chapel are two Morton Feldman pieces I adore. I still have to decide which one is my favorite recording of them. Every time I am questioning what I am doing with music I listen to Triadic Memories and I feel ok.
Music Has The Right To Children by Boards Of Canada

I am definitely going to record another one or two solo albums. There’s still a lot I want to say with solo guitar. Also, this past year I have been playing with some extraordinary improvisers in the city, with some of them more regularly than others. A trio recording with the unique guitarists Sandy Ewen and Nicola Hein is in the works, along with a duo with classical guitar virtuoso Alejandro Flores.
The idea of bringing my aesthetic to a larger group is brewing , but I am in no rush to have an ensemble recording under my name.

Ok, this is the last question…some years ago I read a nice book, written by Bill Milkowski titled “Rockers, Jazzbos and Visionaries”. Carlos Santana answered to him: “Some people have talent, some people have vision. And vision is more important then talent, obviously.”…after so many years spent playing, what’s your vision?

Great quote and question.
I want the listener to experience a state of suspension, a heightened state of being. Stasis. Abstract artists call it “abstract experience”, Zen practitioners call it Samadhi. I am after that.
I like to build “architectural” pieces. I like symmetry, balance. My dad is an architect, maybe it comes from there. I like repetition and using a few, clear ideas. I explore concepts first, chords second, melodies third.
I don’t like wasting sounds. I want my music to sound clear. I don’t like excessive musical information. I strip things down to the essential. I am the same way in life, always getting rid of stuff, streamlining, decluttering.