To be honest, my mother forced me!! 😉 I didn’t want to have anything to do with music; I started on piano when I was 7 but didn’t like it and quit when I was 9. I didn’t like my teacher and now that I’m older I realize how important that is, because one great teacher can change your life. So when I was 13 my mother wanted me to have some kind of musical proficiency, she never wanted me to have a musical career, but once I started taking lessons with Markus Wienstroer I would leave with my head filled with music and was inspired to keep on playing.

I listened to all sorts of stuff, my parents had jazz, RnB and classical records, I started out with rock, then moved on to jazz, fusion, hard rock, punk, free jazz……..at Hampshire College and New England Conservatory I was exposed to World music and many other styles. In 2006 I returned to NEC and explored melodic aspects and harmonic possibilities of microtonality and Turkish, Indian and Chinese melodies and inflections.

The following list kind of sums it up, its basically a lot of groove music, Jazz, classical and “non-western” styles, (not necessarily in this order): 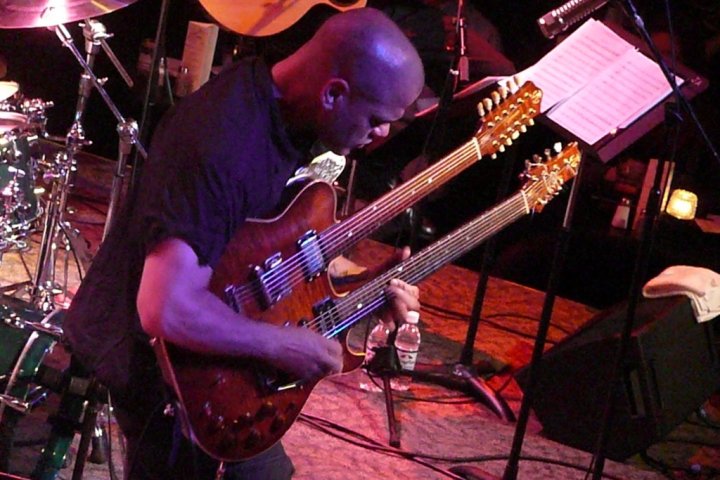 I’m a big fan of your music, I play or better I try to play a fretless guitar too, I would like to start from you record “Punk Jazz” … your version of “Bright Size Life” by Pat Metheny is simply amazing.. how did you get the idea to play it in that way?

It was great to meet Pat Metheny and get a lot of positive feedback on my version of his tune, I like interpreting covers and standards in different ways, maybe that’s from listening to Tony Williams Lifetime’s version of Vashkar or Coltrane re-interpreting songs like Summertime or Jimi Hendrix playing the US national anthem. At New England Conservatory we would have soirees where many different groups would play the same music in different ways, also from a very young age I was always interested in mixing a groove from one style, a melody from another piece and harmonies from somewhere else, its kind of in my DNA. Maybe that’s the real reason my nickname is “FuZe”

One of the things that I like about your music is your ability to move around different kind of genres: with Screaming Headless Torso you play a mix of jazz and punk, with Hasidic New Wave a mix of Sephardic and jazz, in your own personal records you are more experimental playing microtonal music too..how does it come this peculiar mix?

I’ve always loved to collide styles with each other, its not only the moment of grooving hard!! in a particular style, but then also the juxtaposition of different styles in one tune like the version of Blue in Green (Screaming Headless Torsos) with smooth reggae verses and an added hard rock bridge……to me the emotional impact is stronger. With that said, you have to be careful, if you do too many styles it can weaken the overall impact of the music you are presenting. That’s something I’m struggling with. I also experiment with different styles with the hope that I can invent my own rhythmic style some day, I’m happy with my new microtonal melodic and harmonic language but would like to add a new rhythmic component that’s unique too.

How did you start playing fretless and why…….you are one of the best fretless guitar player……can you talk to us about your “Fuzeblaster”?

Thank you for your kind words! When you experiment with a lot of “non-western” music you realize they have more notes than our 12 notes per octave system and if you really want to try and play melodies from those cultures you have to adapt and that’s why I started playing fretless. I’m stunned when players think they’re doing something serious with Eastern European, Middle Eastern or Asian music but then only use 12 notes per octave. It’s like playing the blues without those wonderful heart wrenching blue notes! That’s like pretending to cook high-end Italian food without garlic or olive oil….?!?!!??! what is that!?!?!?

As far as the FuZeblaster goes I sold it recently. I wasn’t playing it and it should be in the hands of a player. I’ve moved on to the same kind of double neck guitar with fretless on top by Campbell American and Turan guitars and I’m talking to Galasso guitars about future options. The double neck allows me to go back and forth from 12 ET (equal temperament) to any type of microtonal playing on the fretless neck. The fretless also allows me to do really cool blues and Indian slides, Turkish and East Asian inflections, whether it is microtonal or not. Here’s an example with the great Greek Laouta player Vasilis Kostas!

What does improvisation mean in your music research? Can we go back to talking about improvisation in a repertoire so encoded as the classic or you’re forced to leave and turn to other repertoires, jazz, contemporary, etc.?

First of all I don’t really think anyone REALLY improvises if you define improvisation as doing something new each time you play. Just listen to any piece where there are numerous takes (like Coltrane on Giant Steps) and you will hear some phrases that are repeated throughout the different takes. I view improvisation as a unique language an individual interpreter has developed that incorporates a large body of worked-out phrases and in-the-moment spontaneous melodic invention. Great examples are Django Reihardt on “I’ll see you in my dreams” and Coltrane on “Crescent”. Django’s solo is total genius and Coltrane is of course magical and inspired and what stands out to me is that you can hear two things: 1) both clearly use phrases that they have already worked out in advance and then 2) in the moment simple melodic and rhythmic development which is fresh and new. And so improvisation is a great opportunity to play the SAME music every night on the road but then take the audience on a brand new journey on every piece….it’s a privilege!!!

In my case I’m forced to explore different repertoires because I want to improvise in eastern styles (melody) in a microtonal harmonic language (harmony) that’s superimposed over phat beats (rhythm) and this doesn’t exist, but this is what I’m most excited about these days. My record “FLAM” is a good example of mixing all these elements and there’s a heightened emphasis on an improvisational variety that starts with a continuum of a) through composed parts (no improv) to b) structured improv (where you MUST improvise on specific melodic motifs, in this case bird song) to c) outright full on free improvisation. This EPK will give you an idea:

Sometimes errors are my best musical ideas!! mistakes can be used as improvisational or compositional ideas that can lead to new music!

In a moment of crisis you find out what you are made of. My first year in college was tough because I acquired a very bad case of tendonitis from over practicing the wrong things likes too many scales too fast for too long and not learning tunes in a musical context and not starting slowly at first either. But good things can happen too – this is how I met John Medeski because he was having the same issues. And at the moment it’s very difficult to get work doing microtonal music, because in general the world seems more interested in doing the same thing over and over (look at shows like American Idol and The Voice where singers are encouraged and do what was already done before or the whole “sequel” phenomenon in movies where new versions of old action movies are all the rage, or in politics where it seems like the clock is being turned back with “nationalist” politicians encouraging racism, sexism and homophobia,etc….)

I’m working on new songs for Screaming Headless Torsos, trying to get gigs for “MikroJazz” (RareNoise Records) – a microtonal jazz record inspired by (mostly German) expressionist painting and art that features Philipp Gerschlauer (alto sax – 128 notes per octave!!), Jack DeJohnette – drums, Matt Garrison on fretless bass and the incredible microtonal keyboard player Giorgi Mikadze from the Republic of Georgia. Other projects are microjamz with John Medeski, awesome original material with Giorgi Mikadze based on Georgian microtonality, and more microgrooves with Utar Artun (Turkey) and Yazhi Guo (China). here are some examples, but the new music will be more microtonal:

Last question: a few years ago, during an interview with Bill Milkowski for his book “Rockers, Jazzbos and Visionaries” Carlos Santana said, “Some people have talent, some people have vision. And vision is more important then talent, obviously.” I think all of you have a great talent, but … what is your personal vision?

I agree, these days there are so many players with incredible ability, but very few have original ideas or are at least open to new ideas. It’s certainly hard for me to achieve my vision of mixing eastern, western and microtonal elements in new improvisational and compositional contexts, because most players prefer to look backwards than forwards.