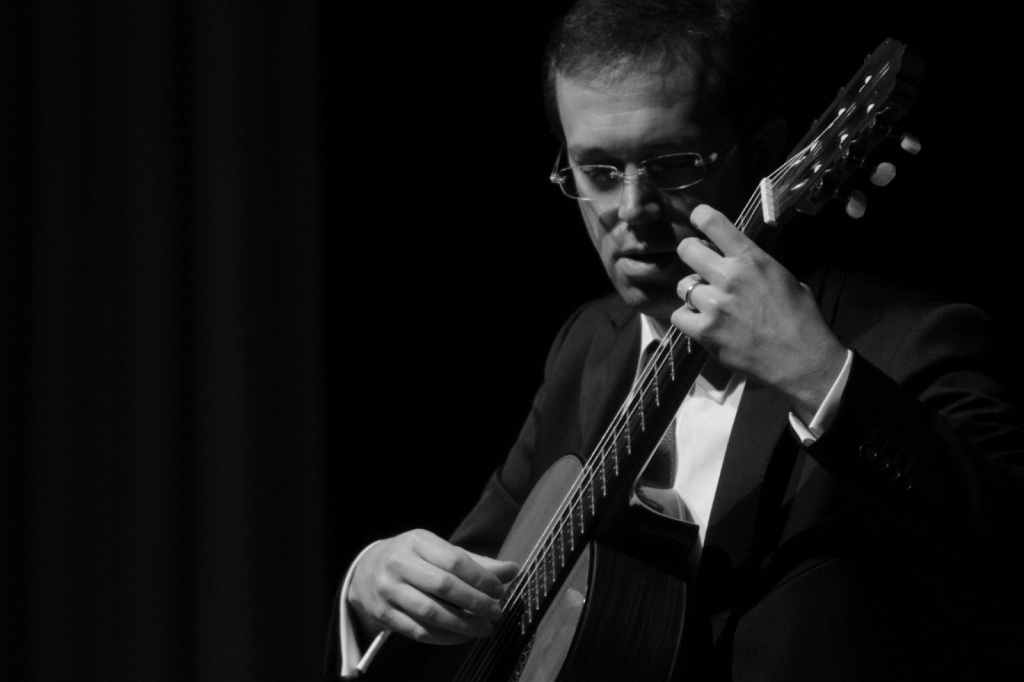 Hi Andrea, welcome back to my Neuguitars blog. In our last chat in 2016, we talked about your double CD dedicated to Takemitsu, released in 2004. This year, fourteen years later, you’re back on your footsteps reinterpreting the music of this Japanese composer, why this choice?

Hi Andrea, thanks above all for the attention to my work and for the hospitality on Neuguitars. The main reasons that led me to go back to Takemitsu and to compare myself again with his music were the desire to fix on the record the ideas gained in fourteen years of performances and the desire to improve some aspects that I don’t consider entirely satisfactory in the 2003 recording, related above all to the recording quality. The prospect of recording this new integral for Brilliant Classics, a prestigious label, always sensitive to monographic projects on a quality repertoire, represented a further stimulus.

Fourteen years are not a few … were they really necessary to allow you to interpret Takemitsu’s music in a new way?

I don’t think I have drastically changed my interpretation in this new recording compared to the previous one, even if there are some differences: for example, the overall duration is less and has allowed to concentrate the whole program in a single CD. Rather, I believe that my interpretations have been shaped by years and years of performances, enriching them with a new breath and new colors. Fourteen years are not few: experiences are maturing, life itself is inevitably reflected in making music. Not to mention the daily study on timbre-dynamic investigation, always in progress …

What guitars did you use this time to play Takemitsu’s music?

I used a 1939 Hermann Hauser, built specifically for Andrés Segovia and belonged to him for about a decade. It’s a guitar with an already modern concept, but with the charm of the sound modeled at the time (and, certainly, also by the touch of Segovia). Thanks to its exceptional timbre-dynamic range, it’s an ideal instrument for playing Takemitsu’s music.

I was impressed by the recording quality of this last CD, the music almost seems to breathe and the relationships between sounds and silences are really perfect, who should we thank for this excellent job?

I am particularly pleased that you think so. The old recording still seems good to me today, but I perceive its limits in the presence of sound, which does not faithfully portray all the tonal nuances of my touch and the instrument. I feel a sort of “filter” that smoothes the dynamics and colors. It had done the best with the technology available at the time, but today this is not enough anymore and, above all, it doesn’t give justice to a music like that of Takemitsu, in which the timbre is a vital element. The new recording was made with the same settings of my Henze’s CDs made for Brilliant Classics: natural reverberation, no equalization, a not so close recording to set the sound in a manner similar to listening in the room. Alessandro Scandroglio is the very good sound engineer I’ve been working with since 2011, always with total satisfaction.

Takemitsu has composed many guitar music, but I have the impression that in his repertoire, the performers tend to put aside the 12 Songs, which for me are 12 small gems. They haven’t a contemporary character, but they draw directly from pop and jazz, so loved by Takemitsu, could these be the reasons for this lack of attention?

In general, it seems to me that Takemitsu’s music has not yet received the attention it deserves from guitarists. You don’t come across executions of his pieces often, perhaps because they are considered difficult to listen to the public, or because they are perceived as distant from our sensibility. Yet, he is a great composer of the twentieth century who has been able to reinterpret the sound of the guitar in an original and masterful way, expressing himself in a language that incorporates many elements of the Western tradition. I would expect to see it appear more often in concert programs. You’re right, the songs are neglected even more than the rest. It’s difficult to understand why, since they are like small masterpieces of their kind, even more so for immediate listening. I find them elegant and refined: Takemitsu, who very modestly defines the Songs “Transcriptions for Guitar”, actually radically transforms the original songs, showing also in this genre a strong color sensibility and a taste for stylistic contamination. Last year, in preparation for the recording, I performed eight of the Songs in concert in a monographic program on Takemitsu, inserting them as intermezzos between his original works. It worked great and the audience appreciated it.

Your relationship with Brilliant Classics seems consolidated, will you release other recordings with them?

Soon I will record a record dedicated to music for violin and guitar by Mauro Giuliani, in duo with Piercarlo Sacco. The output is scheduled for 2019.