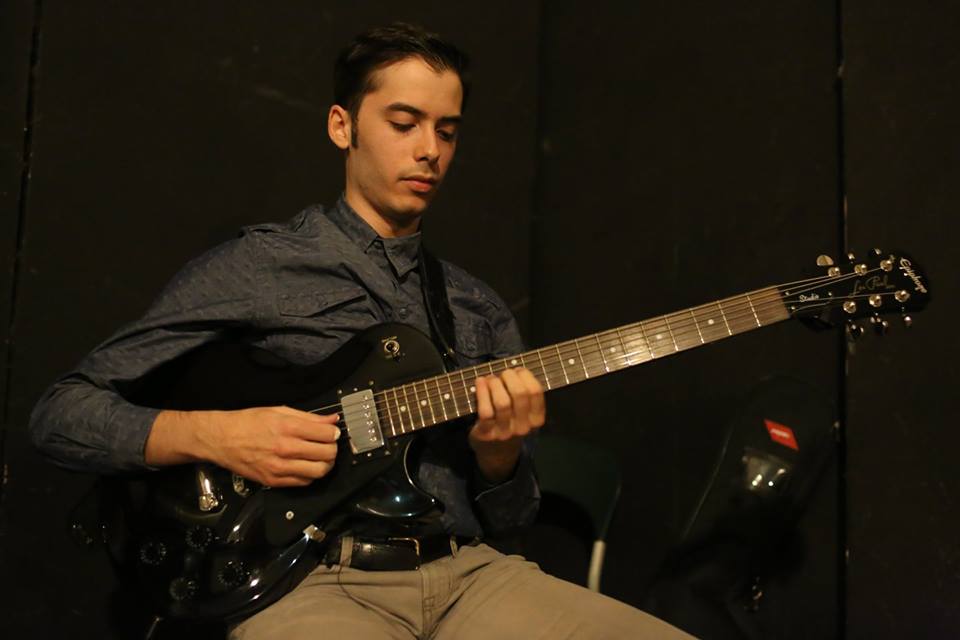 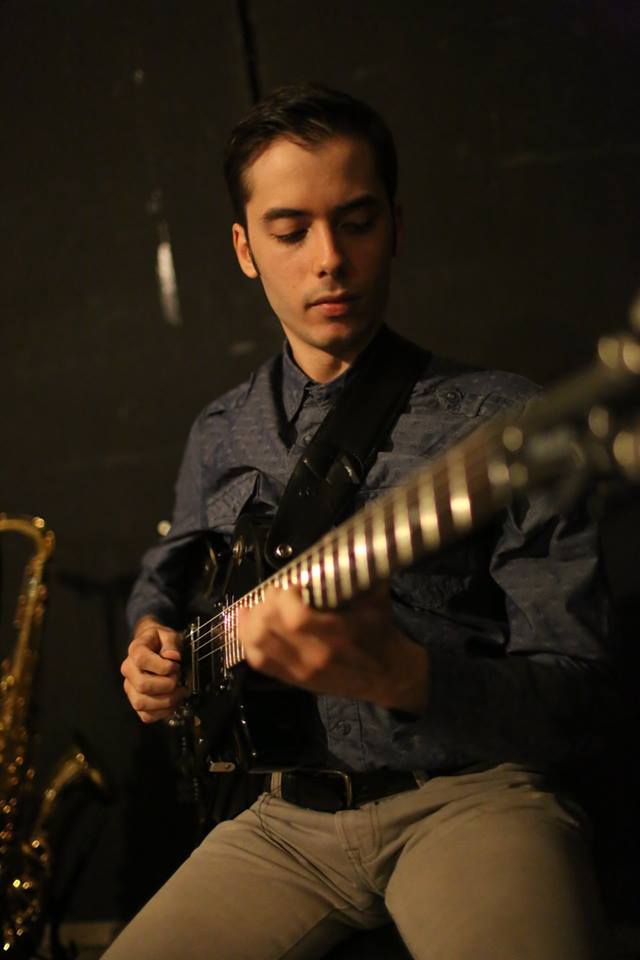 When did you start playing guitar and why?

I don’t remember ever starting. The only conceivable memory is that of oblivion. I seek to connect to the absolute/what is absolute, and leave time and history to the garbage trucks. “Time and space died yesterday. We are already living in the absolute”. But there is something hounding me, a Beginning and therefore an End. It is this seeking while being hounded, it is this infatuation that leads me to the act, to let myself be played.

What did you study and what’s your musical background?

I am mainly self-taught. The first serious lessons I ever took were Robert Fripp’s Guitar Circle/Guitar Craft lessons. They have been extremely useful, although, to be honest, lately I was starting to sense a degree of stiffness. However, the important thing is to know how to un-learn what you have learned, meaning that you should assimilate as much as possible to un-learn as much as possible. What I’m saying is that there is a paradoxical increase of liberty in the ostensible “limitation” of it which leads to a certain discipline of indiscipline or to a disciplined indiscipline.

Which are the guitars you play and have played with?

To be honest, I haven’t tried many guitars in my life. I’m not that much of an expert. Having said that, I have a certain attraction to the Parker Fly guitar. I have always been more interested in only the Music and how to come into contact with it.

How did you come up with the concept (idea) for “Intonazioni Serafiche”?

I am opposed to Ideas (including the platonic ones, at least when intended in a certain way, that is as substantial ontological foundation or as a “supplementary metaphor for/of the being”).

This leads us back to the previous questions. It is simply about being visited.

The real question is how to put yourself in the position of being visited. Even in this case, some of the internal practices/doctrines (and external techniques) learned at the GC (and not only) have come to my aid. In the end, to some extent, you become the music (or you become the becoming). You are at the mercy of signifiers. Complete hostility towards any ontology, always “human, all too human”. I leave signifieds to signifieds (sì, c’è scritto propio così). A miracle is now possible: the possibility of impossibility. God is dead. Torn is the Veil of the Temple.

I also advise some prosecco or, even better, some cabernet, preferably from Veneto.

Robert Fripp’s influence and quotes appear quite evident, but it seems to me that you have also developed a different way to manage your guitar’s loops, that there is a greater stratification, a more complex musical building, in some cases, I’d say almost minimalistic…

I agree. It’s true, but I wouldn’t be able to explain it. Music appeared like this, the complex structure is just the result of this aesthetic need. There is really no thinking behind it, the compositions of the album all stem from improvisation, structure takes shape in a natural way (that is through act). My only difficulty is the performance. “Sacramento è questa demenza” (by which Carmelo Bene referred to the contact one has with immediacy, sacrament, which in turn implies the subject’s epochè, dementia).

How did your collaboration with netlabel Laverna start?

I found it surfing in the internet, reading the info on its site I understood right away that it would have been just perfect for me. Besides, it’s from Venice! Long live Venice! Ezra Pound published his first poetry collection (A Lume Spento) in Venice when he was 23. Long live Ezra Pound!

What significance has improvisation in your musical quest? Is it possible to start talking about improvisation again in a repertoire as encoded as the classical one or one must necessarily get out of it and turn to other repertoires such as jazz, contemporary, etc?

As stated before, improvisation is crucial for me, because music is the act itself. An excess of thinking is definitely anti-musical! Musicality is by definition carefreeness. Wherever there is an excess of thinking upstream (that is the desire to impart a significance, to infuse concepts, to say something) you have a complete (or partial) loss of musicality. Conceptual music! Conceptual art! Musicality is energy. It can manifest itself only in absolute abandonment.

In any case, I don’t see a dichotomy between improvisation and a “stiff” composition, meaning that a composition might as well have the same spontaneous features of improvisation. I mean, musical impulsiveness might just as well arise in a score, but that would be while putting it in writing anyway, rarely during performance. I’m thinking of Vivaldi’s, Mozart’s, Rossini’s and Beethoven’s composition spontaneity.

Even in my case (and in many others), for example, compositions stem/arise from improvisations which gradually take on a rigid framework. As a result, despite they’re sounding stiff, their impulsiveness is preserved, just as with the great compositions of the past (you can easily perceive it), which, amongst other things, are almost never rigid throughout their performance (Paganini doesn’t repeat). The problem is the rigidity upstream! That is to say a stiffness (a thought) that wants to replace musicality, that wants to distort music to its liking, in the name of some ideology or of a fad: the undaunted triumph of the incurable human excrement, always too human to be tolerated. Sickly paladins of such battle were surely Schoenberg, Stockhausen, and beforehand, was Wagner. But I’d say all the twentieth century was like that, not only the “cultured” slice of it. Even popular music (or as they say, pop music) whilst maintaining something, remains excessively encoded. It is very hard to find carefreeness in pop music, always so careful of bowing down to business power (and its corrupted subjects), always and forever conservative (and not to mention ruled by anti-aesthetic Anglophones), not to say deicide.

On the other hand, an excess of twentieth-century structuring leads to idolization of the past, of the so called “classic”, to the point that, especially in Italy, only this last one is perceived as cultural (which, as Derrida points out, originates from “colo”, that is colonization). This is the end of real culture, understood instead as men sublimation, and for that as complete subversion. Hence, futurist’s distaste for “passatismo” and the classic/tradition is completely appropriate. All of those we consider “classics” were actually futurists! So, classical music, as meant by your question, shouldn’t even exist! That is by its own definition fossilization.

Conversely, beyond all historicism, if genius is he who frees from the present moment, as Nietzsche said, classic is everything that is eternal.

What role does error play in your musical view?

I do not know the word error. I prefer the word wander. (in Italian: errore = error, errare = to wander).

Would you recommend five albums which are essential to you, which one should always have with…the classic five albums for the desert island.

This is probably the hardest question. It is hard for me to think of albums…maybe this is very “millennial” (and scarcely purist), but I mostly listen to music on the internet, on Youtube.

However, I am happy to suggest five “musical things” that are essential to me:

At the moment, I am committed to play live Intonazioni Serafiche. In february I’ll be playing three concerts in Berlin and there will be certainly other european cities. I prefer not to force anything too rigidly into the future. However, I would like to try to make the rhythmics more apparent (and the energy) which there is plenty of anyway in IS, but I see how it might not be so evident.