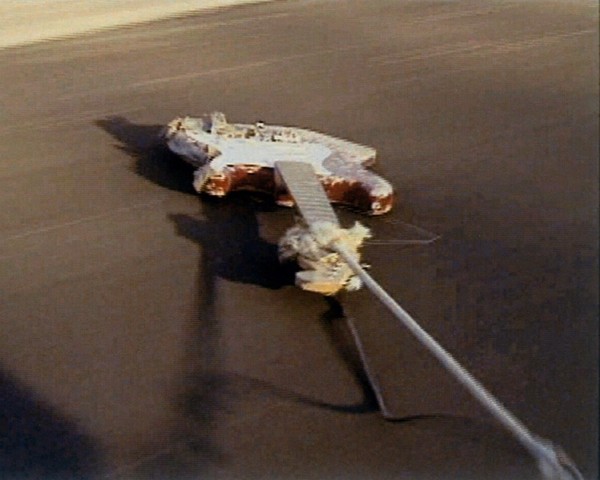 The story behind. In Jasper, Texas, 1998, three white supremacists tied James Byrd Jr., a 49 year-old black man, by his feet to the back of a truck and drug him to death.

In a haunting introductory scene, Marclay prepares for the crime. He knots rope around the neck of the guitar and ties it to the back of an old Chevrolet truck. He also connects a cable from the guitar to an amplifier, powered by three car batteries, that sits on the back of the truck. He plays a few almost accidental strums, evoking the anthropomorphic qualities of the instrument, as well as its preciousness, so much like a person, capable of good and bad. Then, with the amp turned up, Marclay drags the guitar through the South Texas landscape.

Guitar Drag’s direct extended metaphor of a very real murder pulls the viewer, with immediacy, into an endurance test: by watching the video beginning to end, we’re forced to consider (at length) the unthinkable. In this way, the video surrenders its status as an art form and serves instead as a testament.

Henry Kaiser Monthly Solo #19 : The Beauty and the Terror on #neuguitars #blog #HenryKaiser

A guitar at the service of the “fourth world”. Steve Tibbetts on #neuguitars #blog #SteveTibbetts