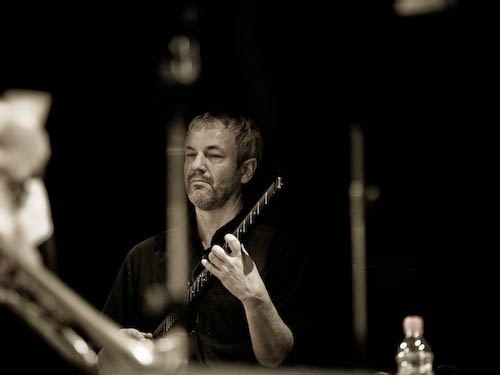 My parents wanted me to play an instrument, so I started to take piano lessons when I was 7 or 8 years old. In school, I also took up the violin. Then, my family moved from California to Europe and I tried playing the trumpet for a short while. When I was 13, the brother of a friend of mine turned me on to the guitar and taught me some basic things. My father was a great and very supportive man and he noticed immendiately that this was “my” instrument, so he bought me a black Fender Stratocaster, my first electric guitar. The electric guitar is such a fantastic, highly expressive and eclectic instrument There is practically nothing that you cann’t do with an electric guitar, the possibilities are staggering.

I studied classical music for a while concentrating on music written between 1880 and 1945, or example Bartok, Debussy, Ravel, Satie and Shostakowitsch. But my main background is really instrumental, rock-driven music that is intellectually interesting and that has physical power, a mysterious atmosphere and a strong emotional identity. 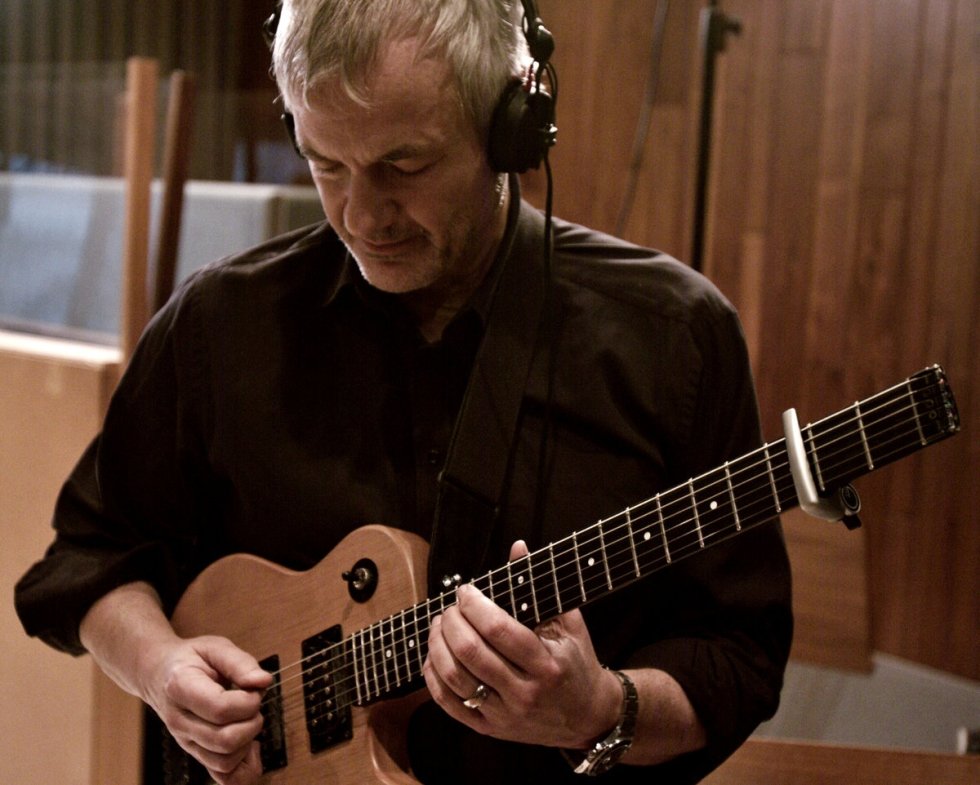 When I was very young, my main influences were The Beatles and pop music of the late 1960s. As a teenager, my cousin turned me on to English progressive rock music like Emerson, Lake and Palmer and Pink Floyd. From there, I moved on to Yes and then King Crimson. Robert Fripp became a huge influence and I still think that the music he created in the early 1970s is absolutely mind-blowing. I was also very influenced by Brian Eno’s production techniques and the whole minimal music scene, especially Steve Reich.

In your website and in your bio is written “S T E P H A N    T H E L E N     COMPOSER / GUITARIST / MATHEMATICIAN”. All these components are present in your music, how do you balance them?

It took me a very long time to find out that my true vocation in life is to be a composer, not so much a performer. It’s not very natural for me to perform music onstage and I don’t like to be stared at while I’m playing. From a very early age, I have always enjoyed having a lot of time to work on something over and over again, to tinker around until I’m satisfied. I envy musicians who are totally spontaneous players like David Torn or Markus Reuter, but I’m a bit different, I need more research time. I love to play the guitar and I love to solve mathematical problems, but what I really have to do in life is to write and create new music. 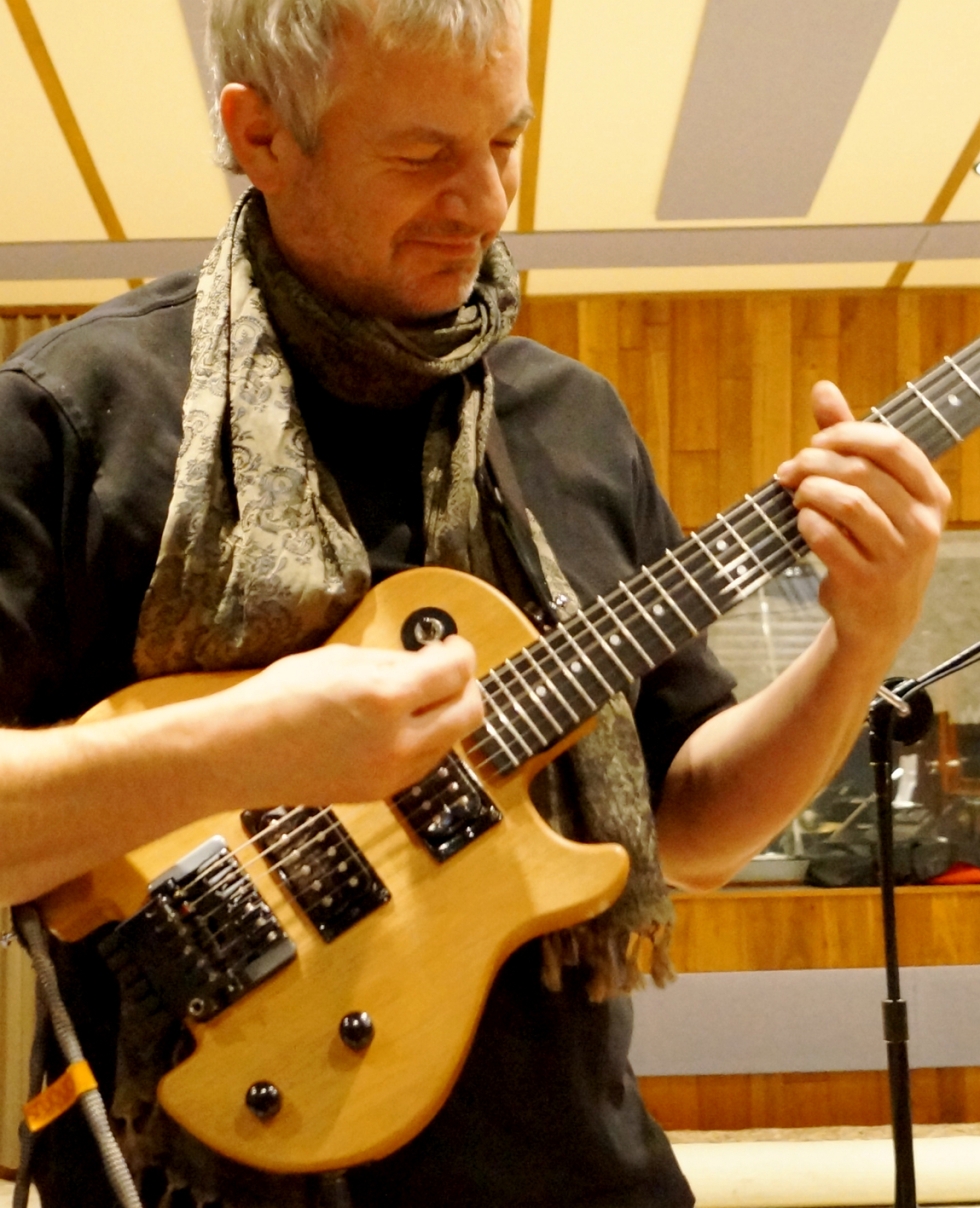 Your records are released by MoonJune Records. How did start this relationship?

I knew Leonardo Pavkovic from MoonJune Records because he was working with the band Stick Men and Markus Reuter (who plays in that band) is a close friend of mine. I met him when he organized three concerts for Sonar opening for Stick Men in Canada. When I was looking for a label for “Fractal Guitar”, Leonardo was the first person I asked and, luckily, he loved the album and decided to release it, despite the fact that he had made a decision to only release albums which he had been a part of from the start.

Although I love many ensembles that create freely improvised music, my focus is more on music that is composed but has a certain amount of freedom. In Sonar, everbody has their own composed part, but there is a lot of freedom and room for spontaneous variations, so we never play a piece in exactly the same way. Sometimes, it’s 7 minutes long and sometimes 12 minutes, we never know. It also depends very much on our audience, how they react to what we play. That’s the interesting thing about a “groove”: a groove is usually just a bar or two of written music and is only really good if it starts developing a life of its own with help of small variations and group dynamics. So if group of musicians play groove-based music, it’s something between composition and improvisation.

Making errors is of course an unavoidable and necessary part of any process. There are two good quotes concerning errors. The first one is from Robert Fripp who said that “there is no mistake except one: failing to learn from a mistake” and the second from Brian Eno “honor thy error as a hidden intention.” So the power of a mistake is that it teaches you something about yourself that you would’t know on a concious level. It’s a way for the subconcious to speak to you and to teach you wise, truthful and unexpected things about yourself.

A crisis is also an unavoidable and important part of any process. It’s always a painful part and the most important but also very difficult thing is to stay persistent, calm and optimistic. It’s an obstacle you must overcome if you want something to reach the next level. The good news is that you will be highly rewarded if you stick through the hard part.

In 2019, I want to finish writing a piece commisioned by the Mannheimer Schlagwerk for two vibraphones, two marimbas, clarinet and organ that will be premiered in 2020. My main work from April – July 2019 will be to record and mix the next Sonar with David Torn album and in November, I will go to California to record an album with a very interesting group of musicians from totally different backgrounds that will get together especially for that project. I also want to work on a chamber music album, maybe write a new string quartet and sit down with Markus and start composing music for a possible recording project in 2020.

My vision is to create music that is personal and universal, simultaneously subjective and objective. Music that is structeded according to mathematical truth, organic beauty and to laws of the universe, but still has a human “spark” in it and that is deeply passionate. Music in which the musicians forget their egos and try to create something greater than themselves, a spiritual trip through our common humanity that also reflects the totally mysterious world around us.