“Since the modernist movement in music was accepted earlier and more decisively in Sweden than in Denmark, Borup-Jørgensen’s enduring ties with Sweden where he grew up may partly explain the persistent modernist aspects of his work. He was one of the few Danish composers to attend the Summer Courses at Darmstadt in 1959 and 1962. His early works employed a strongly dissonant, expressionistic style, and over ti me they evolved into an exploration of sound masses projecting naturalistic images. The large-scale evocation of the sea in his master-work for orchestra, Marin, 1963-70, achieves its effect by the combination of minutely-scaled instrumental timbres. In Marin, and again in Musica Autumnalis for wind ensemble, percussion and electric organ, 1997, Borup-Jørgensen calls for aleatoric choices with indeterminant notation for players and conductor. Listening to Borup-Jørgensen’s works for piano that cover a thirty-five-year period-Winter Pieces, 1959, Summer Intermezzi, 1971, Epigrams, 1976, Thalatta! Thalatta! 1987-88, and Raindrop Interludes, 1992-94-one is struck by the encroaching stillness and silence beginning in the 1970s. There is a perceptible narrowing of the field of sound marked by few strongly expressive outbursts, and a move from a large expressionistic palette to a minimal one as melody progressively disappears from his music. This is heard quite literally in Peri peti: In memoriam Poul Borum for guitar trio, 1995-96. The scordatura tuning allows for varied harmonic possibilities and, thoroughly familiar with the responsive character of the instrument, the composer builds up to the dramatic moment that, in turn, progressively dissipates into pensive melancholy to the point of complete dissolution.”1 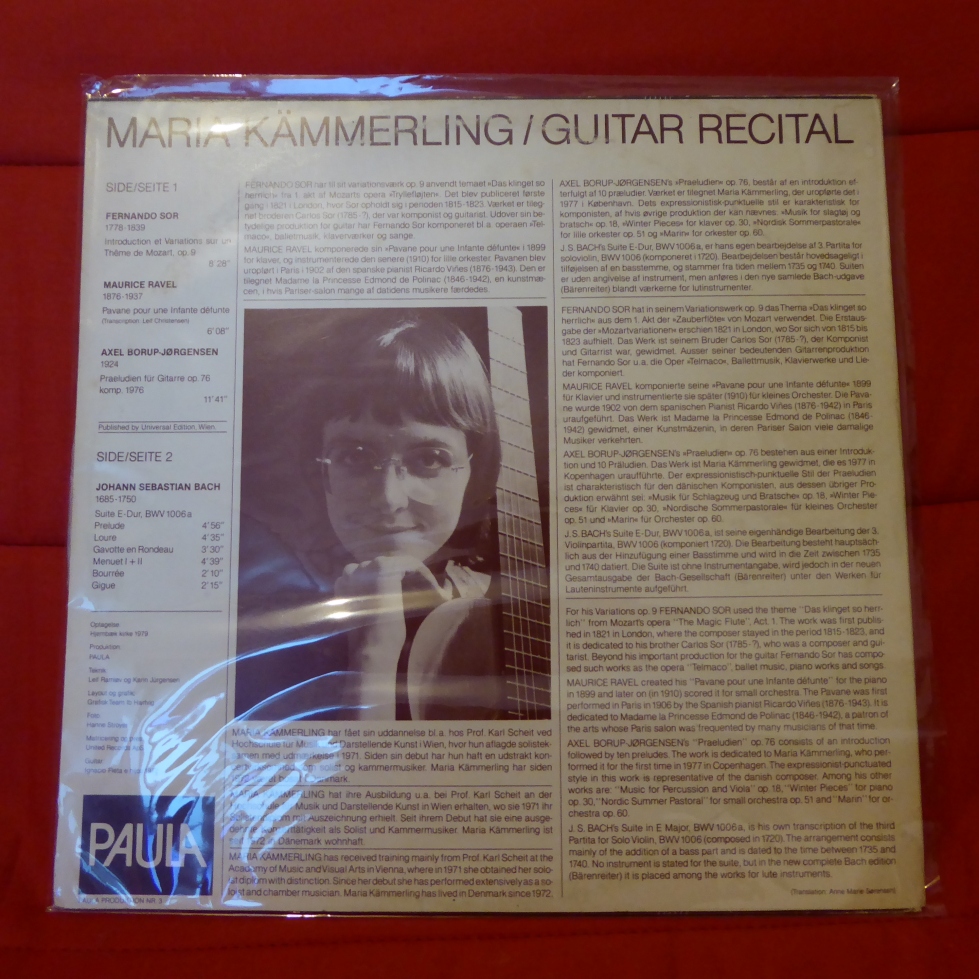 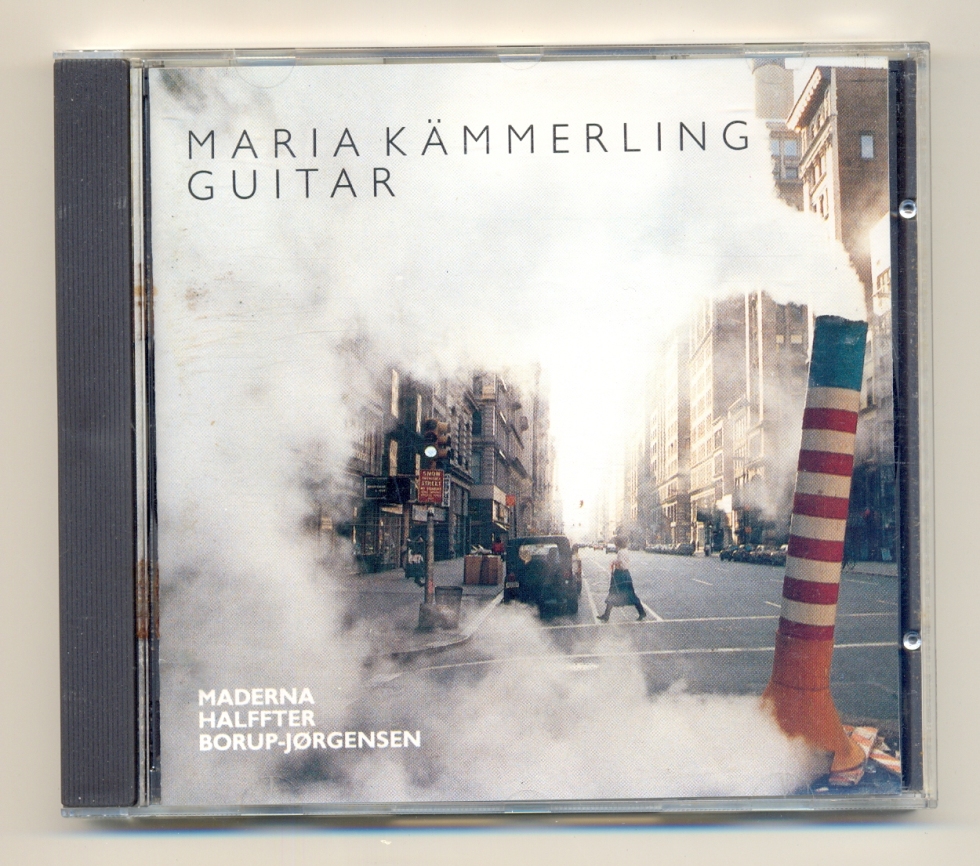 In questo disco Maria Karmmerling interpretava due composizioni di Borup-Jørgensen: Fur Gitarre, op. 86, del 1979 e Praeludien Fur Gitarre, op. 76, del 1979, entrambi a lei dedicati. Scrive il musicologo Jan Jacoby nelle note che accompagnano il cd: “Having frequently employed the guitar as part of an ensemble, Borup-Jørgensen was inspired in the seventies by a budding generation of gifted Danish guitarists to compose solos for this instrument. Praeambula from 1974 was planned on a generous scale and in the same year supplied thematic material for five small ‘Morceaux’ as well as to the work recorded here: Praeludien, opus 76. The work consists of a brief introduction followed by ten preludes, and for a period of five years, Borup-Jørgensen continued to revise and polish the original piece. Some of the preludes are concentrated studies of a single motif, others are more complex, and a number are connected by variants of the same thematic ideas. Like Praeludien, Fur Gitarre, op. 86, is dedicated to Maria Kämmerling, whose request inspired the composer to continue his work with the guitar. The first and last sections seem to make musical statements of a comparatively violent nature as they alternate between powerful chords and fluent triplet sequences. To a certain degree, the flowing, organically flexible form is controlled by a number of recurrent clusters of chords, In the middle section everything comes to a standstill in an introverted, lingering shimmer of lyrical sound, which is extremely characteristic of Borup-Jørgensen’s style.” 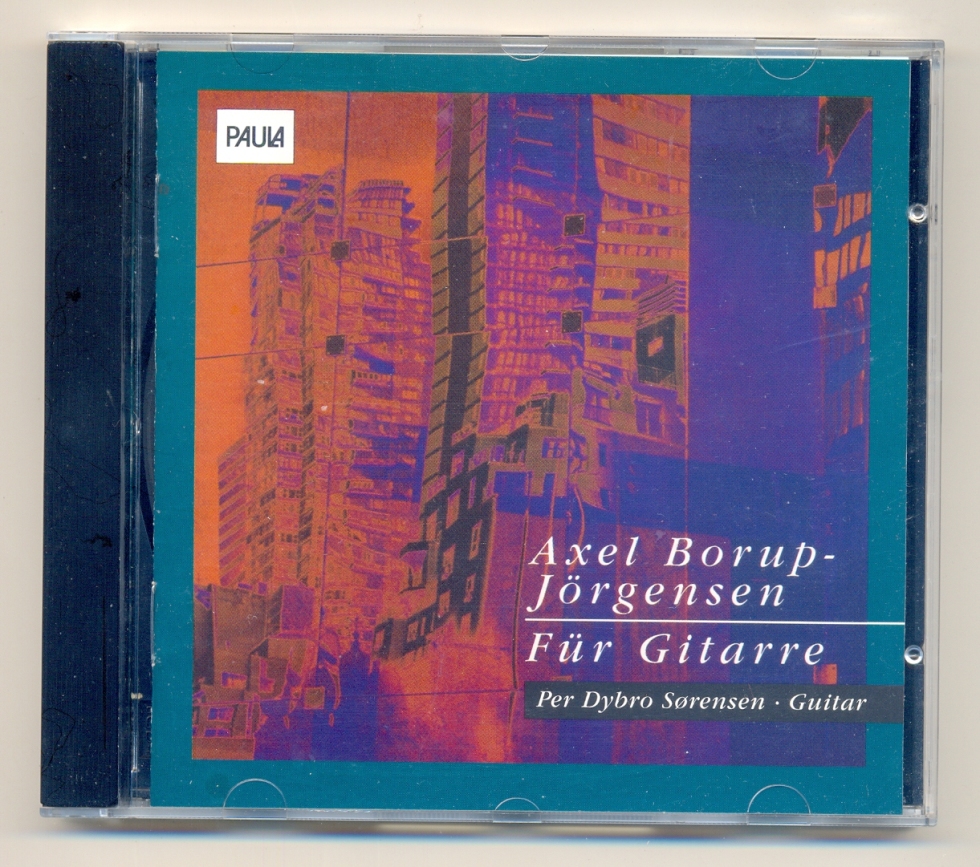 Praeambula, op 72, was written for Ingolf Olsen in 1974, and revised up to 1976 for a grammophone recording of Erling Møldrup. The work consists of different types of motivic material, interrupting each other, giving the impression of parallel existance of them all, and of sudden shifts in the music between them. The tension between these “layers” constitutes the piece.

Morceaux, op 73: 2 (1975 to Erling Møldrup), and Praeludien, op 76, (1976 for Maria Kämmerling) represent two different ways of further treatment of rnaterial from Praeambula. Here the separate types of material are allowed to be rounded off in movements, set up with mutual contrast. In Morceaux each type is used only once, while in Praeludien the same material often appears varied in several movements.

The latest work for guitar solo is Fur Gitarre, op 86 (1978-79 for Maria Kämmerling). Here the broad, dramatic chords of the opening section are interlaced with an insistent line of triplets, forming a curve of tension, which, in the middle of the pìece, gives way to a vegetative and almost cristalline section. The latter is cut off again by the triplets and chords, and thìs dramatic third section concludes in a kind of recapitulation of the opening chords, whereafter the music approaches a static state.

Old Chinese Poems, op 103: 1 (1983 for Agnethe Christensen and Bo Isholm) were originally composed for mezzosoprano and Iute, but the Iute part can – as in this case – be played on a guitar with the four low strìngs tuned down a major second (D, G, c, f, b, e’). The songs are composed in a relatively simple way, the middle song a capella.

Songs for Soprano and Guitar on Poems by Ole Sarvig, op 104 (Bodil Gümoes and Erling Møldrup) were written in 1983-84 on quotations from the poetry of Ole Sarvig. They are highly demanding for the voice, and are far more dramatic in their expression than the Chinese songs. But like those, thìs work contains an important guitar part, commenting, framing and reinforcìng the mood of the text.

“Poesies pour La Dame à la Licorne’; op 121:1 (for Maria Kämmerling and Leif Christensen) were written as late as 1986-88. The title refers to the French gobelin-series (i.e. tapestries) of the later 15th century, “The Lady with the Unicorn”. The work is wrìtren for two guitars. The inspiration is partly found in Rilkes “Die Aufzeichnungen des Malte Laurids Brigge”.

praeambula: Opus 72 (1974-1976): it was written in 1974 and subsequently revised in 1976 for its first recording by Erling Meldrup. Originally conceived as the first in a series of preludes (hence the use of the plural form “praeambula”), Borup-Jmgensen instead ..hose to develop his ideas in a single piece. praeambula unfolds over twelve distinctive episodes and a coda, each systematically exploring a specific “rnood” or mode of articulation; even a lilting waltz appears.

morceaux: Opus 73 (1974-75): together with Praeludien fur Gitarre (1976-79), the five short morceaux (the longest lasting just over a minute) is a further exploration of material from praeambula, but instead of the previous work’s continuous flow, the contrasting material is organized into discrete, self-contained movements with extremely concentrated language.

“fur gitarre”: Opus 86 (1978-79): within just a couple of years, Borup-Jørgensen’s thinking about how to write for the guitar evolved considerably. While many elements of praeambula are present, there is a new confidence in handling the guitar’s unique sonic properties. Structurally, “fùr gitarre” bears a distant resemblance to the Lute Suites of the Baroque, beginning with a brief parlando prelude, followed by a sequence of characteristic dance movements.

Tristrophoni: Opus 163:1 (2000): the work’s title is based on the Greek word tristrophon which is a poem consisting of three verses. The first version, which Frederik Munk Larsen has chosen for this recording, was finished in 2000. The original tripartite structure consisted of a brief, gestural introduction, featuring chords and melodie movement based on tritones, followed by a slightly faster movement, distinguished by the repeated tolling of the guitar’s open ‘E’ string, over which graceful triplet chords expand and contract, concluding with a haunting passage entirely in harmonics for the third section. The epilogue once again features natural harmonics, but now expanded into complex chord structures and the piece ends nearly frozen in time, as the final harmonics evaporate into silence.

“floating islands”: Opus 169:0 (2002): is quite possibly Borup-Jørgensen’s most extraordinary composition for the guitar, and may in fact be unique in the entire literature. This piece is written only in harmonics, the score is meticulously detailed with precise performance instructions for every note, including which string is played and fret is to be touched. The entire collection consists of ten aphoristic movements of varying length. A recurring “motto theme” in triplet rhythm (D – C# – G) demarcates the work’s separate episodes. The title “floating islands” refers to ethereal, ringing tones of the natural harmonics which seem to float upon the surface of silence as was inspired by lines from a poem by Elizabeth Barrett Browning.