“Derek is a musician I have admired from a distance for a long time. he is one of the few guitar players in modern times who has not only forged an unmistakable voice on the instrument, but significantly altered the potential of what the instrument could become in an improvisational setting.”*

Don’t worry. In 1997 Derek Bailey hadn’t taken a mainstream crush. He had not abandoned his stubbornly individualistic and uncompromising guitar approach in search of acceptance by a possible mass market. This box of three Cds, with a provocative and somewhat crazy aspect, sees the four (Derek Bailey, Pat Metheny, Gregg Bendian and Paul Wertigo) moving easily on the harsh and wild territory of improvised music. For Metheny, The Sign Of 4 was the next step in an artistic trajectory, very different from the high quality pop jazz for which it was already universally known, which started with the free jazz of “Song X” and continued with the noise of “Zero Tolerance For Silence”. For Bailey, it was an opportunity to expose his unrepeatable and unpredictable logic to legions of Metheny fans who were unfamiliar with the spontaneous combustion of collective improvisation. Most of the tracks are characterized by the use of electric guitars and Metheny proves to be a good companion for Bailey, providing a linear approach and a penetrating distortion to complete Bailey’s cut-out phrases and overheated electric squeals.

To tell the truth, their meeting ground is another: the two meet thanks to Sherlock Holmes. The title of this box, “The Sign Of 4”, and the titles of the three CDs contained in it refer directly to the famous British investigator. The Sign of the Four (or The Sign of Four) is the second novel (out of four) starring the famous detective Sherlock Holmes written by Sir Arthur Conan Doyle. It was published in 1890 and was immediately a huge success in Great Britain and the United States and remains one of the most important cases involving the investigator Sherlock Holmes with his trusted assistant Watson. It reveals us more about the characters and their humanity, the investigator’s strange habits and Watson’s feelings for Miss Morstan (future wife of the doctor). In addition, it connects the purely deductive discourse with the British war in the Indian territories. The author has an excellent sense of rhythm and manages to keep the suspense high even when he makes Holmes explain his deductions, interspersing the theory with the pursuits in a London full of smoke and Gothic darkness.

“It is one of the records that I have been involved in over the past few years that I am most proud of.”*

Metheny attributes the responsibility for this happy and unusual meeting to the two drummers Greg Bendian and Paul Wertico, who had played a lot with both Bailey and Metheny, suggesting to both that they should have to play together. And they did it. This triple CD is the result of five days spent at high chromatic intensity. The four of Sherlock Holmes met in New York and got it on:

Metheny’s commitment is total and evident since the first CD where we find “A Study In Scarlet”, over 61 minutes of free and changing forms in the name of free improvisation, where an uninterrupted stream of sound consciusness is unleashed with Bailey who responds to Metheny’s assault with agitated and distorted waves of noise, while drummers Gregg Bendian and Paul Wertico attack their instruments relentlessly, playing anything but a constant rhythm.

“One of the things that I wanted to do with this record was that I really wanted to make one that was totally unlike any record that I or Derek had ever made before. I feel we did that – and that record has some amazing music on it, with a lot of variety within it’s own vocabulary.”*

The remaining sessions are more varied. The third CD moves between spacious and peaceful interludes and furious exchanges between drummers and guitarists, with the most ambitious improvisations, including “Fortune”, “Tracks” and “In The Quest Of A Solution”, where Pat shows off his pikasso guitar, and that embrace both extreme sides.

The studio session, titled “The Science Of Deduction”, is, in my opinion, the best of all, with acoustic tracks like “Strange Story” and “The Aurora” that use Bendian’s vibrations and ethnic percussion to shape the silently mysterious interactions of Bailey and Metheny. A copious and abundant musical production that is sometimes a bit lenghty and not exactly in focus but which manages to drag the listener into the vortex of sound, to communicate a sense of group movement and a common purpose. I invite you not to stop at the first listening: new facets and interrelationships will surely emerge after repeated listening. “The Sign of 4” is placed sideways to the aesthetics of the extremes: atonal music, feline electric howls, alien harmonic patterns, outbursts of convulsive violence, distortion discharges, surprising low-gravity passages, tonal serenity … Pat Metheny, in the forum on his website, writes about the fortune of this little monument to free improvisation:

“I predicted at the time two things; one was that a lot of people would have a hard time listening to it because of the particular density that that vocabulary involves. The other was that it would roundly dissed by members and critics associated with the so-called avant garde community, as was Song X at the time it was released. That predicted dissing, by the way, would in fact have absolutely nothing to do with the actual music that was actually played, even though it would be cloaked in the rhetoric of musical discussion.”*

Once this case was solved, Sherlock Holmes retired to the London fog. Somewhere Derek Bailey’s guitar plays jazz standards … the investigator responds with the sound of his violin … 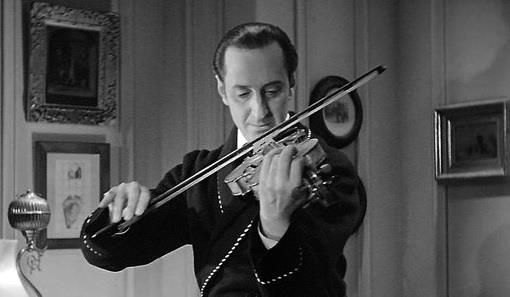