Erkan Oğur (born April 17, 1954) is a Turkish musician. Pioneer of fretless guitars, he invented the first fretless classical guitar in 1976. As a composer, he influenced many musicians with his works, especially soundtracks, combining the sounds of classical music with ancient traditional music and Turkish folk music . He has performed all over the world and is considered a master of kopuz and bağlama lutes.

Erkan Oğur was born on April 17, 1954, in Ankara, Turkey. He spent his childhood in Elazığ, in eastern Turkey, where he became interested in the Turkish violin and lute bağlama, and began to study them assiduously. He graduated from Elazığ high school, then moved to study physics at the Faculty of Sciences of the University of Ankara from 1970 to 1973, then went on to study chemical engineering and in 1974 he continued his education at the Ludwig-Maximilians University of Munich, Germany, for three years. He started studying the guitar in 1973, deciding to become a professional musician and since he could not get the right sounds to be able to play Turkish melodies, in 1976 he modified his guitar inventing the classical guitar without frets. In 1980, he returned to Turkey and started studying at the Istanbul State Conservatory. After military service, he continued his career as a musician, releasing his first album in Germany called Arayışlar (“Research”). In 1989, he traveled to the United States to work with numerous local blues artists, most notably Robert “One Man” Johnson, introducing the fretless guitar into the blues. A year later, he released his first album in Turkey, Bir Ömürlük Misafir (“A Lifetime Guest”), which was quite successful. He is a member of Telvin’s trio, which mainly plays Turkish folk music in improvised jazz style, with İlkin Deniz and Turgut Alp Bekoglu, and released an album called Telvin in 2006. His soundtrack for the 2004 film Yazı Tura by Uğur Yücel it has won two awards: the Golden Orange 2004 for best music at the Golden Orange Film Festival in Antalya and the 2005 prize for best music at the Ankara International Film Festival.

Oğur’s contributions gave musical substance to many commercial productions in the burgeoning Turkish pop scene in the ’80s, but it was up to a German radio producer, Birger Gesthuisen, to track him down and give him the opportunity to record a solo CD. (There was an earlier cassette, released in 1983, which received only a small distribution.)

Fretless (Feuer und Ice FUEC 714) was released in 1993 and gave Erkan’s solo career a decisive boost. Until then it was held in high esteem by the musicians themselves, but his name was like a trade secret. A cult name.

In addition to extraordinary music, it contains a German presentation edited by Gesthuisen himself and the titles of the songs in English, things often missing on Turkish CDs. On the CD there is also the presence of the French jazz guitarist Philip Catherine. 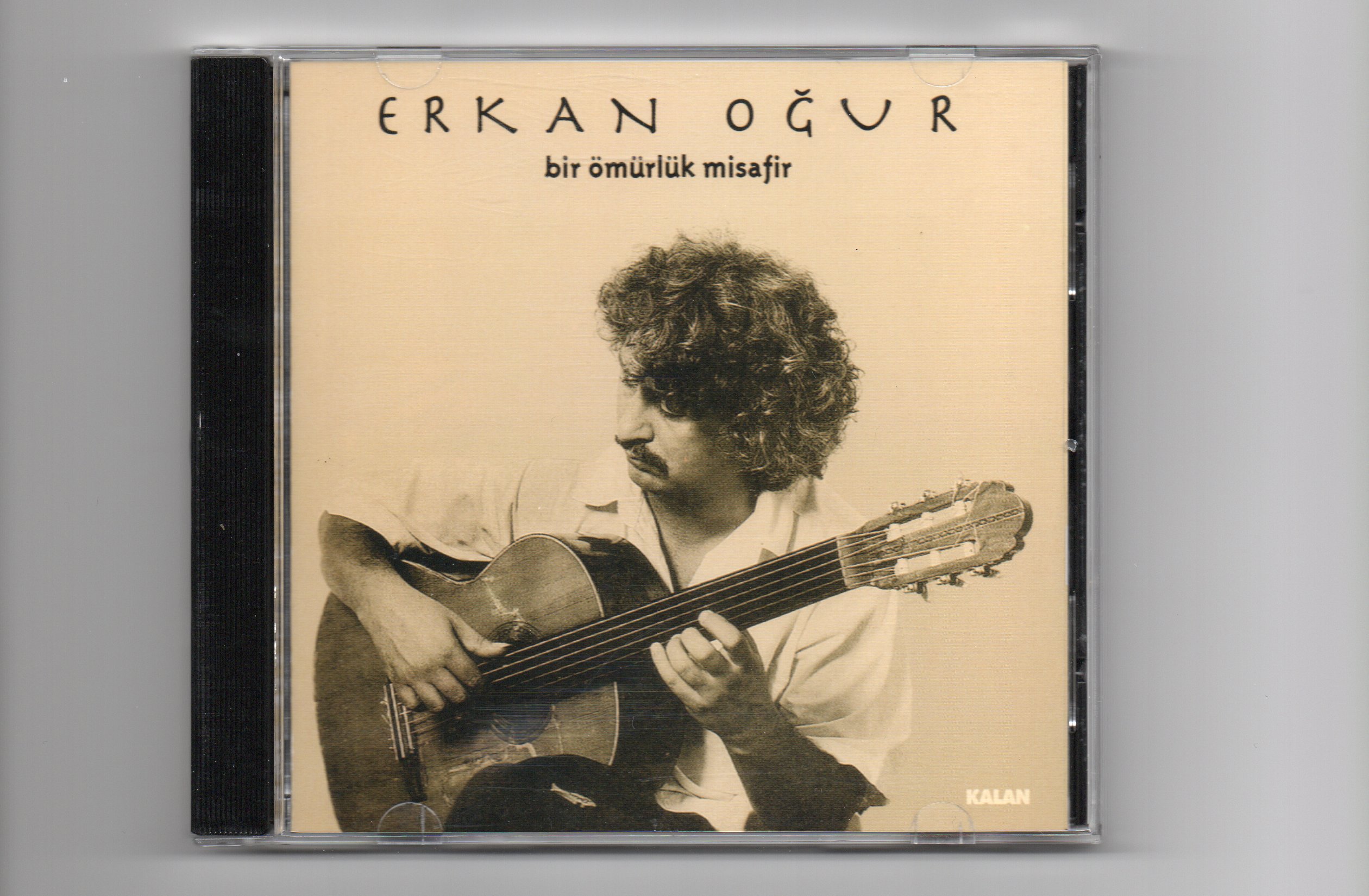 Most of the tracks on that first CD were later reorganized and, together with other tracks, were released in Turkey (2000) under the title of Bir Ömürlük Misafir (Kalan 184).

The fretless guitar is clearly visible on the cover, as well as the splendid duet with Philip Catherine on Ağırlama, (“Hey Onbesli” a melody from East Anatolia). On both records the listener can fully appreciate the extraordinary sound of the fretless instrument and Erkan’s unique style: an excellent antidote to the postcard-like stereotypical image of Turkish music given by hundreds of belly dance discs.

“Neden Geldim Istanbul’a” (Why did I ever come to Istanbul?) gives a taste of the majestic rhythms and noble lines of Turkish “artistic”songs, while the lyrics of the track that gives the title to the disc are by Sezen Aksu, the queen of Turkish pop. Another interesting track is Sis, a composition by Mikis Theodorakis, from the first soundtrack of the film composed by Erkan and keyboard player Aydın Eysen, more often associated with a brilliant electric brand of jazz fusion, which here he makes an unexpected appearance. 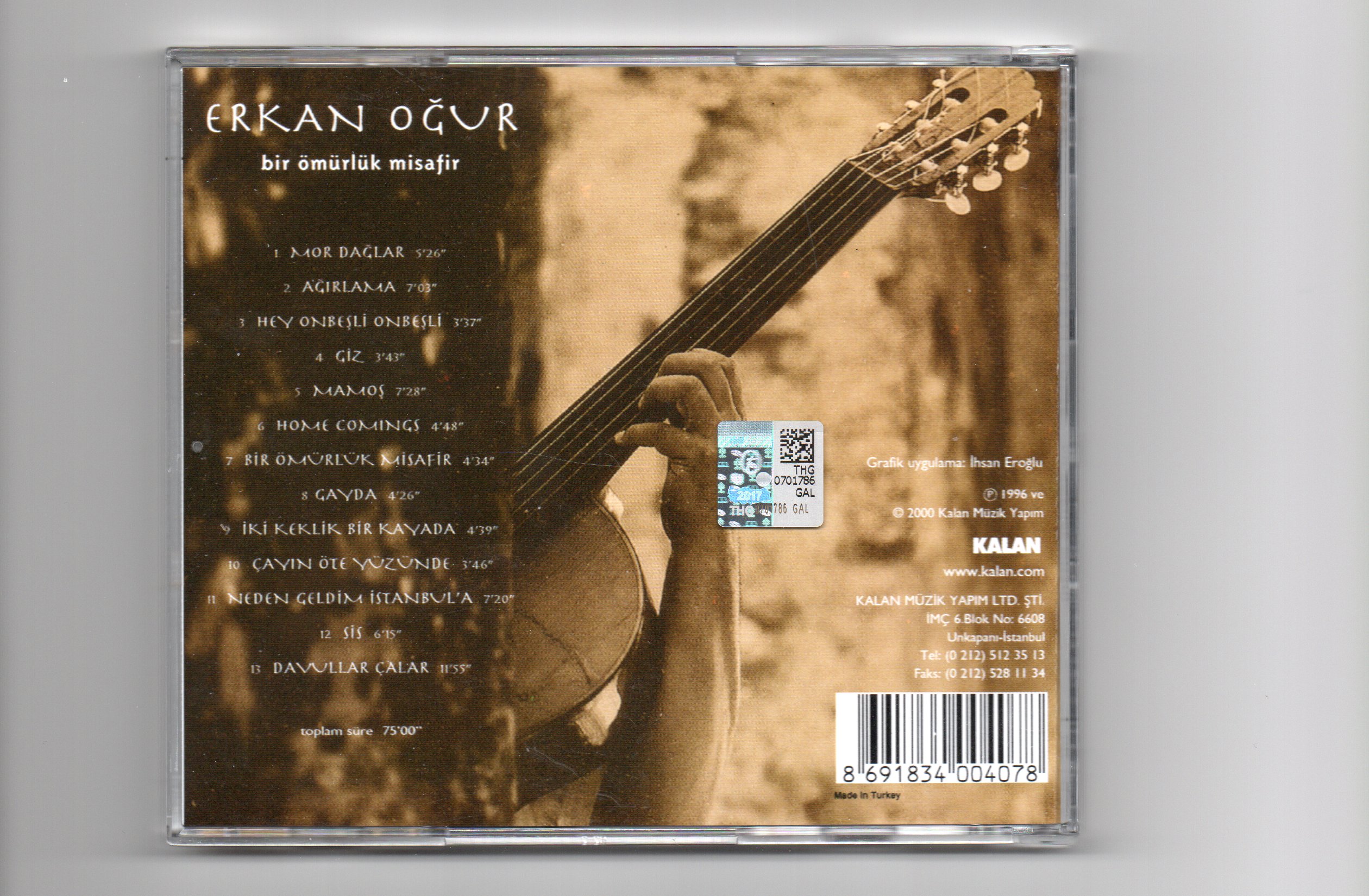 After the release of Fretless, Erkan has participated in numerous projects by other artists and has released a series of CDs on the Kalan label as leader or co-leader: Gulun Kokusu Vardi (Kalan 86) in 1998; the following year Hiç (Nothing), with the saz / cure player Okan Murat Öztürk, (Kalan 135); in 2000 Anadolu Beşik (Kalan 178) and the soundtrack of Eskıya (Kalan 188), a film by Yavuz Turgul. Oğur was also invited to play on the CDs of Okan Murat Öztürk’s group, Bengi. 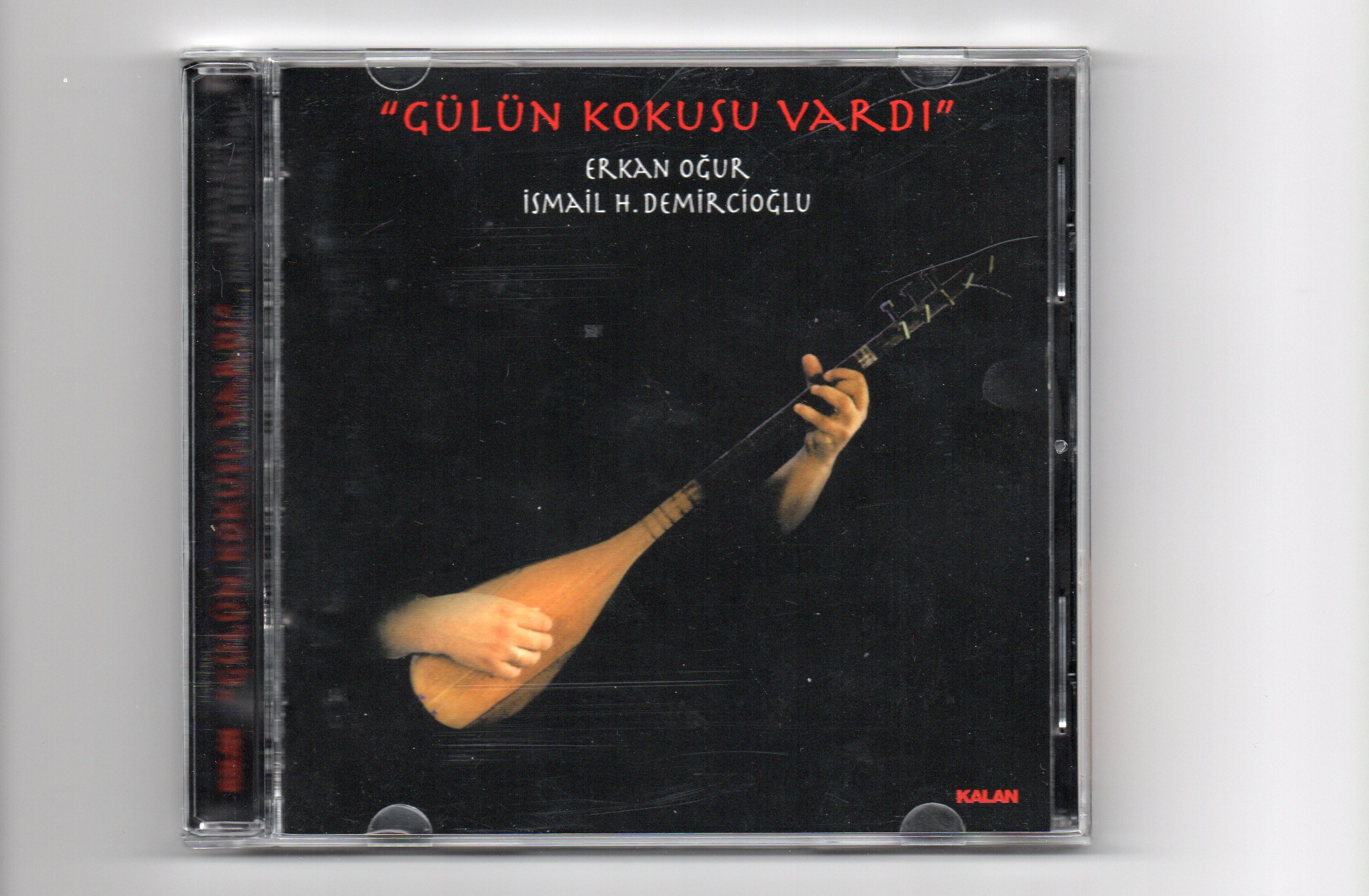 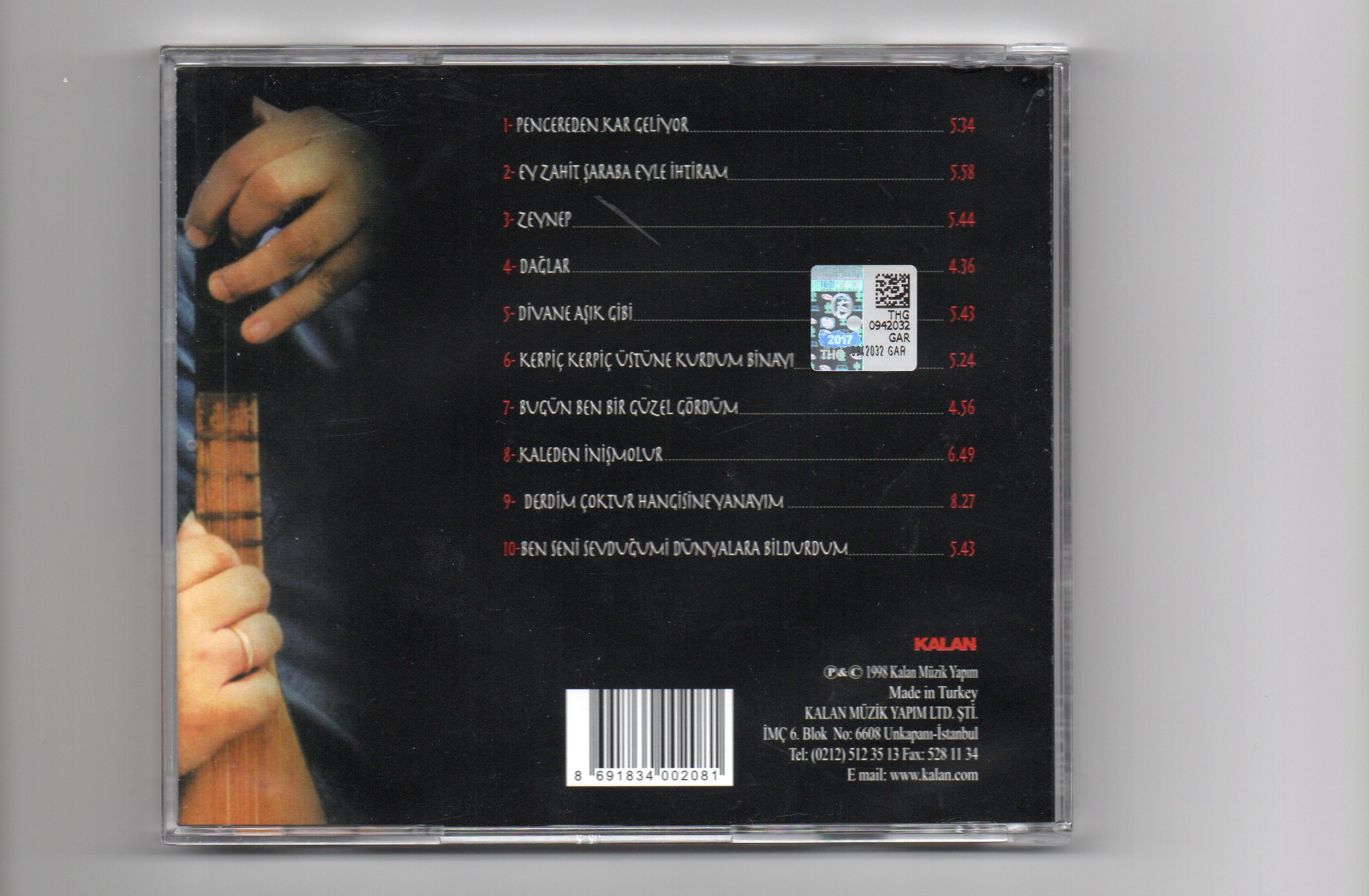 Another excellent opportunity to listen to Erkan Oğur’s music is given by the two CDs, “Gülün Kokusu Vardı” from 1998 and “Bilinmeyenle Karşılaşmak” from 2017, both played with İsmail Hakkı Demircioğlu, bass player and Turkish baglama.

I am not an expert in traditional makam music, but I have the impression that in these records the music expresses and moves more in the wake of tradition, compared to the two solo records.

Oğur makes more use of the kopuz, an ancient long-necked stringed instrument, without frets, similar to other Turkish stringed instruments such as the lute and used in Central Asian music. They are two excellent records, also characterized by the sung parts.

Fuad, published in October 2001 (Kalan 231) represented the possibility for Erkan Oğur to increase his musical profile and his international popularity. This extraordinary record is the result of a beautiful collaboration with Djivan Gasparyan, the Armenian duduk player who won numerous awards all over the world. Supported by a small group of carefully chosen musicians, including the emerging kemençe player Derya Türkân and a percussion group led by longtime collaborator Ferruh Yarkın, Oğur has produced a CD to which the listener can return several times, discovering something new every time. The repertoire is based on traditional melodies from eastern Turkey and Armenia, with some original pieces by Erkan himself. However, an academic or strictly philological interpretation should not be expected, since these songs enjoy the personal interpretations developed by these artists, deeply rooted in their traditions, but at the same time very open to a contemporary vision. Production does not shy away from modern technological improvements. The CD captures all the stamped nuances of string and wind instruments and preserves their dynamics in the mixing phase. Furthermore, Oğur overturns two or more plucked string instruments, allowing himself to play the melody, the accompaniment and the solo, sometimes in duet with himself, with the exact sound mix he had in mind.

One of the guitars illustrated in the booklet that accompanies the CD is a double-necked model, one with the keyboard, the other without frets, which allows Oğur to move quickly between the two musical worlds. It also uses ebow, so you can better produce the variety of microtonal sounds reminiscent of the complex Makam system. Throughout the CD, it presents improvised preludes from free time, giving way to extraordinarily beautiful melodies which in turn inspire eloquent solos, the vocal timbres of kemençe and duduk alternate with the delicate figures of kopuz and guitar.

Erkan Oğur, in his records, plays mainly the fretless classical guitar, a very particular instrument also because it has undergone various vicissitudes: the soundboard is broken, the neck is broken. Despite these drawbacks, he continues to use it because of its unique unique sound and its particular timbre. The guitar was damaged in 1991 in New York at the airport, where Erkan Oğur had gone for an interview with Guitar Player magazine. He put the guitar near the wall in its soft case and a huge trunk fell on it from a cart. Due to these traumas the sound had changed, with a reduced sound volume, but strangely, now it has a longer sustain, although it seems that Erkan Oğurnon has not yet understood why, since he continues to use it now the neck has been redone new and the body repaired. It is an old Spanish classical guitar, only a village guitar, not a well-known manufacturer.

It is a necessary instrument for those who want to play Turkish and Makam music, since it moves outside the temperate system typical of western music. Oğur believes that even if the Turkish system is not perfect, it adapts better to the real frequencies produced by a string if divided into parts and plucked. According to Oğur, the Turkish system is better because the tones move, unlike the so-called circle of fifths in western harmony. Makam music cannot be played with well-tempered instruments. Some notes of some makams can be played, but a makam is not just a scale or just a combination of quarters or fifths. A makam cannot be placed on a temperate scale: a makam moves the quarters or fifths in a special logic, in a special combination. Like Erkan Oğur’s music.