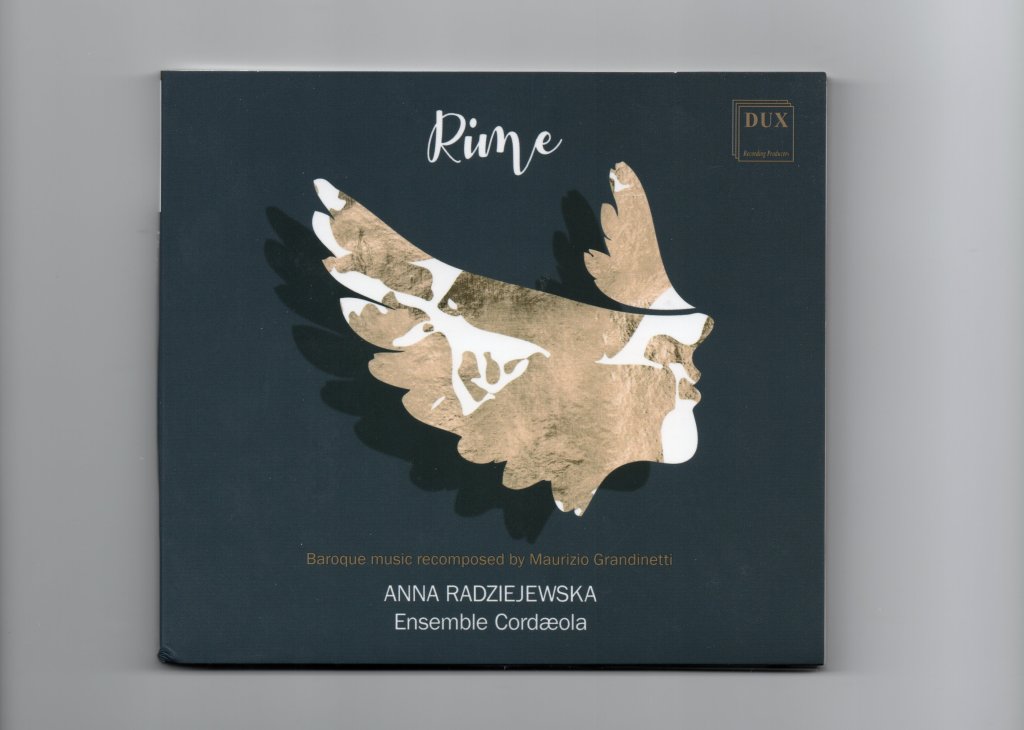 I have more and more the feeling of living in a country that is afraid of the future, complains of the present and idolizes a past that will be nothing but the present of today and the future of tomorrow, in a cyclical biblical lament capable of exhausting and annihilating even the brightest minds. Why am I writing this? Because I’m listening to the CD “Rime Baroque music recomposed by Maurizio Grandinetti” and while it spins on my cd player I already seem to hear the chorus of one-way criticisms that accompanies every single piece. But how? How can you play baroque music using an electric guitar? Are we kidding? But who does this Grandinetti think he is? A progressive guitarist?
But let’s go step by step. Maurizio Grandinetti is a guitarist devoted to contemporary music, a person characterized by a solid consistency between his ideas and what he does. Unfortunately, his record production is not very abundant: just two records, “Equivoci” (2003) and “Seek” (2016), two excellent works that accompany his interpretation (again for electric guitar) of “BeBop Baghdad” in Paul Dolden’s album “Histoires d ‘histoire “(2017).

Very little for an interpreter of this level. In 2019, however, this “Rime” was released by the independent Polish label Dux where Grandinetti together with the Cordaeola Ensemble performs baroque music by Antonio Vivaldi, Tarquinio Merula, Alessandro Stradella, Giovanni Pierluigi da Pellestrina, Sigmundo D’India and Alessandro Scarlatti . He plays them with his electric guitar, pedals, effects and all the electronics that can be connected to it. A disgrace to philological orthodoxy? Perhaps, but if this is a rudeness, here we can talk about a matured and calculated project. Not a stroke of madness. Not the expression of an irrational motion. Not all those who read my blog are accustomed to musical philology, baroque music and contemporary ideas: so allow me to better explain the subject of the dispute.

Take two centuries, XVII and XX, two amazing fertile periods, where discoveries, changes, creativity and art blew as the Renaissance and the Twentieth century. Take two composers, musicians, men of culture who were able to “sign” their times, both named John: John Dowland and John Cage. It’s hard to find something common between them, nothing but the undeniable fact that none of them has ever composed music specifically for the classical guitar.

For performance practices we can consider all those conventions, characteristic of each historical moment, which suggest how a piece of music should be interpreted, namely: tempo, phrasing, accentuation, dynamics, articulation, ornaments, agogics, pronunciation of the text and sounds. Since the nineteenth century these elements have been widely reported in musical writing thanks to a refined notation system that allows the composer to insert a rich amount of information into the score and represents the culmination of a centuries-old path in search of an exhaustive graphic representation for the sound idea. The more you go back in time, however, the more graphic aids of this type are reduced until they disappear completely. Grandinetti writes, in the booklet accompanying the cd, as “Today we find Renaissance and pre-Baroque music attractive mostly because of what authors did not put in scores, the part assigned to improvisation and arrangments.” and he adds ”From the beginning of the 1800s, the habit of corresponding each composition to only one interpretation was assumed: the one faithfull to the original. Nothing was left to arbitrary personal choice.”

A declaration of intent that presupposes the existence of multiple narratives within the same music. The desire to read the Urtext in a more articulated, rich and a no longer one-way. A different way of exploiting the essentiality of the information contained in the ancient notation to the advantage of a new interpretation, an essentiality absolutely consistent with the conception, typical of all pre-romantic musical thought, that the written text was a sort of canvas to be completed according to system of stylistic rules learned with experience and through detailed treatises. This is not new. The intense work of recovery and restoration of the original scores, combined with the study and application of contemporary vocal and instrumental techniques and the use of copies of period instruments, led to what have been defined philological performances, generating a controversial relationship among musicians and philologists: the musicians, accused by philologists and musicologists of scientific carelessness and amateurism in their approach to sources, countered by attacking what they called a detached work of cataloging and freezing the musical experience. In this regard Grandinetti, during a chat, told me something very interesting: “To make this record, I was very interested in the techniques of restoration of the work of art and I discovered that the philosophical schools in this branch are very ancient and developed (much more than in music). All this fascinates me very much. The problem is not how to restore a building, a painting, but what sense to give to the restoration: recovery of an artifact/object or of a creative meaning/work of art. And how can you recover the creative meaning of another era without losing its potential? (in the booklet I quote Raphael/restorer of antiquities). ” I agree with Maurizio. The problem of musical philology, unlike the analogous literary discipline, in fact, consists in the impossibility of direct use of the material produced. Between the version conforming to the original of a piece and its transformation into a sound event you need a mediator, an interpreter. Furthermore, the validation of an ancient musical text, which is presented in a form that is now intelligible, also underlies the untranslatability of the massive subjective intervention of improvisation and integration required of performers for many centuries. Intervention that is inevitably affected by the taste, ideas, musical conception present within the societies that have followed one another over time.

There is another aspect that I would like to underline: I agree 100% with Maurizio Grandinetti when he later added: “A crucial point is that I am convinced that an interpreter cannot be a philologist at the same time.” When I read this sentence I went to get the book “Susan Sontag: The Complete Rolling Stone Interview” by Susan Sontag, author of an excellent essay on photography in which she analyzes in detail a remarkable series of structural relationships. On page 71 (Italian edition) we read this sentence “No photographer could ever have written a book like“ On photography ”, but I believe that all photographers know most of the things I talk about in the book. They did not formulate them, or they believe that talking about them is not in their interest …. only someone who was not a photographer and had no professional interest in that activity could have written this book. ” I think Sontag and Grandinetti are trying to tell us the same thing. The artist has the task, the creative act, it doesn’t matter if he is a musician or a photographer. This even though many artists, perhaps more out of necessity than desire, have proved to be excellent theorists. The critic, the philologist has the task of looking for functional relationships in the artist’s work that can provide different points of view and provide new creative and debate ideas. Providing judgments and limiting the field of activity of an artist on the basis of philological and aesthetic assumptions, easily refutable and reversible in the light of new works or a cultural change, I do not think they are no more interesting activities in an age that is experiencing a multiplicity of narratives on art and which for decades has seen the era of cultural, artistic and political manifestos go down.

“Seek, composed for Maurizio Grandinetti, may be considered to be part of a series of virtuoso pieces including Ecliptical for Magnus Andersson and Amygdala for Marco Cappelli. All three musicians bravely extend the boundaries of contemporary guitar music and will fearlessly employ any technique, any instrument, to manifest the necessary sounds. In Seek, tapped chords, clusters, and sequences, generate clouds of overtones and melodic/rhythmic skeins of sound where foreground and background freely shift.” Elliott Sharp

I believe that what Grandinetti defends is a point of view no longer based on the search for a definitive truth on how to reproduce a work of the past, but on the reconstruction of a more credible sound world, in line with what current society can offer. Not the simple representation of the executive practices in vogue, but the expression of their motivations. History, society, culture advance, new instruments are generated, new points of view, a greater plurality of expression is recorded. A form of expression that is far from the stereotyped image of the electric guitarist: “I am very keen on the fact that this CD is not perceived as yet another crossover operation of a modern reinterpretation of the Baroque. I have done my best over the years (as a guitarist) to study and understand Baroque opera and I fell deeply in love with it. My attempt is to keep the creative meanings intact if the contents of the object are changed (harmony, instrumentation, form). ” So if you expect to listen to Maurizio as he mimics a virtuoso shredding at incredible speed, you will be disappointed. Here we are light years away from the epic or the style of the progressive music. The electric guitar here is functional to a project that sees it integrated into an ensemble, with a musical vision very different from the games of Emerson, Lake & Palmer. In fact, I would not like to have led you astray by concentrating only on the electric guitar and Maurizio.

If Maurizio is the ‘deus ex machina’ of the project with his recompositions, it could not have been completed without the beautiful voice of the mezzo-soprano Anna Radziejewska, an artist at ease in the Baroque and contemporary repertoire, a great interpreter of the works of Salvatore Sciarrino, and without the other members of the Cordaeola Ensemble.

I think you have understood that this, more than a review, was a long chat, a flow of thoughts and ideas originating from listening to a CD that in my case worked as a catalyst for experiences. It therefore seems only right to introduce you to those who actively contributed to this truly out of the ordinary project. They are all members of the Phoenix Basel Ensemble, one of the best for contemporary music, all musicians with exceptional sensitivity and commitment: Christoph Bösch, on the flute, Toshiko Sakakibara, on the clarinet, and Consuelo Giulianelli, on the harp.

Schoenberg wrote in his book “Schoenberg’s Program Notes and Musical Analyses”: “Immobility is the greatest obstacle to culture: a stagnant situation only favors the immortality of parasites.”

The Cordaola Ensemble did not stand still.

9. Io per me non cangerei from San Giovanni Battista

A journey into the thought and history of Steve Reich: Conversations (Hanover Square Press, 2022) on #neuguitars #blog #SteveReich