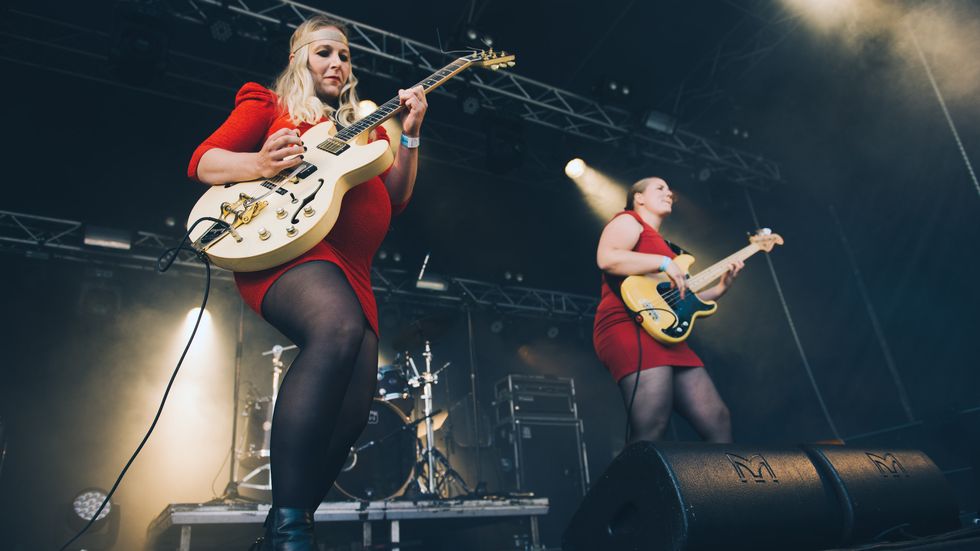 Tradition and talent in Hedvig Mollestad’s music on #neuguitars #blog

I had not yet managed to find an interesting idea to be able to comment on the solo album “Ekhidna”, released in 2020 by Rune Grammofon, which Edvig Mollestad and his excellent trio, with Ellen Brekken (bass) and Ivar Loe Bjørnstad (drums ), return to press my attention with one of the most beautiful records of this sad 2021: “Ding Dong.You’re Dead”.

Two records that I warmly invite you to buy and listen to because they both express a highest level musical quality, accompanied by ideas that will not fail to make you think about what it means to try to make rock music in a moment and in a world which seems to have forgotten concepts such as musical virtuosity, passion, desire for authenticity and innovation, in favor of a lazy hedonism that sees music occupy a scant residual place, as an entertainment backdrop behind unbridled streaming.

Listening to these two albums (and re-listening to “Enfant Terrible” (2014) and “Shoot!” (2011)) led me to wonder about what and how the concept of “tradition” means within rock music. In the context of rock music criticism, unlike what is done for classical music, we rarely talk about “tradition”, even if the term is used from time to time to deplore its absence.

In fact, the most discussed themes have always been “truth”, “sincerity and” authenticity “, key notions that opposed the “empty”feelings of the most sinister consumer music and its ideology. The term “tradition” appears rarely in a non-censorship sentence. The term, then, sounds vaguely laudatory, and suggests, in the praised work, the welcome presence of a certain reconstruction of an…archaeological taste. To tell the truth, every musical genre has its own mental attitude not only in creation but also in criticism; and it is led to forget the shortcomings and limitations of its critical habits even more than those of the creative genius it seeks to analyze.

I realized that, often and willingly, in my blog neuguitars.com I have a tendency to emphasize the characteristics of a musician and/or a composer in whom she/he is less like her/his other colleagues. I always try to find what is most personal, the peculiar substance of that artist, the things that differentiate her/him from her/his predecessors. I am looking for something that can be isolated. It also happened to me with listening to The Messthetics albums, where I realized that not only the best but also the most personal parts of their music are perhaps those where their predecessors most vigorously demonstrate their immortal vitality.

I don’t want to get confused: I fully agree with T.S. Elliot when he states that “if the only form of tradition, of poetic transmission, consisted in following the same paths of the immediately preceding generation, with a blind or timid adherence to the results obtained, “tradition”should certainly be discouraged.” One of the negative things about the excess of quotationism expressed by post modernism is, in fact, the confusion generated by dispersion; too many streams that are lost in the sand, and for me it is always true that novelty is preferable to repetition. It was with this spirit that I approached listening to these two albums.

From the previous records I had gotten the idea that Hedvig Mollestad and her companions were not only excellent musicians, with perfect interplay, but that they were perfectly integrated into a rock “tradition” that, with admirable tenacity, album after album, they stubbornly sought to innovate and graft with new / old ideas without losing their artistic uniqueness. I know. Someone could criticize their instrumental ability, their virtuosity by stating that too much virtuosity dampens or corrupts musical sensibility. However, I believe that a guitarist like Mollestad knows how to play well enough not to prevent the free expression of her indispensable receptivity and sensitivity, that her virtuosity is not limited to what can be translated into useful formulas for Conservatory exams or a empty exhibitionism.

I feel that in “Ekhidna” and “Ding Dong.You’re Dead” the concept of “tradition” has reached a much broader scope. I always quote Eliot: “Tradition is not a heritage that can be easily inherited; whoever wants to get hold of it must conquer it with great effort. ” This phrase means several things: it requires that one needs, first of all, a good historical sense, that is, an awareness not only that the past is past, but that it is also present. I firmly believe that Hedvig Mollestad knows how to play not only with the physical sensation of belonging to her own generation and time, but also with the awareness that all music has its own simultaneous existence and is structured in a simultaneous order. And this cultural baggage can be tapped to create and innovate. Mollestad manages to combine the ability to create powerful riffs, easy to assimilate, with complex, and at the same time not overly cerebral, harmonic structures. Her prog rock easily engages with the complexity of nu-jazz, with the energy of metal; a perfectly functional polymorphic style accompanied by a perfect production that ensures that none of her records expire in the prolixity of repeated listening, aimed at incensing an excess of ego and virtuosity for their own sake.

The possession of the historical sense, which is the sense of the a-temporal as well as of the temporal: this is what makes a musician like Hedvig Mollestad traditional and innovative. This is what makes her most acutely aware of her place in time, of her contemporaneity. No musician, no composer, no artist, taken alone, has a complete meaning. It is not possible to evaluate her/him alone; she/he must be placed, in order to make comparisons and contrasts, among those who preceded her/him. Hedvig Mollestad, Ellen Brekken and Ivar Loe Bjørnstad are placed within a musical flow which, although anchored within popular music, has been able to evolve into a highly innovative and personal forms. Their style is unique, they are easily recognizable and they are never dull or repetitive. I like to listen to their records again and again, perhaps in search of the inevitable citations, historical holds, but above all to immerse myself in a lively, energetic and effective music. Some are able to absorb music, others, less agile, have to conquer it by sweating. They are simply fantastic. Watch them live. Norway dreaming …

The artistic parable of Stian Westerhus on #neuguitars #blog