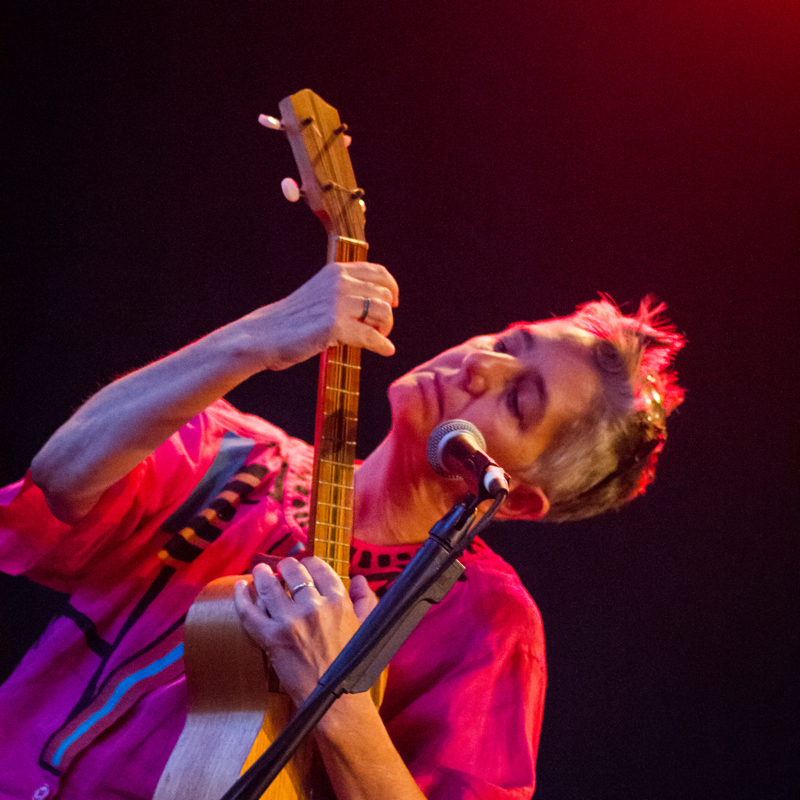 “I like John Cage’s definition of experimental music: music about which the outcome is unforeseen, or something like that. I am not interested in writing music if I know how it’s going to turn out before I start writing. That’s work to me. When I start making a piece, I don’t know how it’s going out, but the piece isn’t finished until it’s turned out somehow. So the work doesn’t necessarily reflect the uncertainty and confusion and risk-taking that I went through to make it. If I’ve made the piece well, then the result of my experimental process rather than an illustration of it.”

The American composer Eve Beglarian represents a complex figure in contemporary music with a difficult stylistic collocation. She is a multifaceted person, composer, performer and editorial / audio producer, according to the New York Times she “has built a career translating other people’s obsessions into music.1” Her works include independent concert compositions, from orchestra to piece for solo instrument, often in combination with tapes or electronics, but also performance or musical theater. Her compositional style is deeply rooted in the American school and, as for John Cage towards the dancer Merce Cunningham, she is often at the service of extra-musical collaborations such as those with set designers, dancers and multimedia artists.

It was from one of these collaborations that the concert version of the piece “Until It Blazes” was born, accompanied by a video of the New York artist Cory Arcangel. Inspired by a passage from the apocryphal gospel of Thomas, the piece leaves the interpreter a lot of freedom as it has neither a specific instrumental destination, nor a fixed duration, however, having to fall within a minute between 6 and 20 minutes.

“Until It Blazes is an amplified solo piece for piano, guitar or other plucked string instrument, harp, marimba, or vibes. The piece requires a stereo multi-tap digital delay for processing, and some kind of distortion processing for the ending. You can also perform the piece using a MIDI keyboard or mallet controller. (If you’re using a MIDI instrument, you can implement the delay in MIDI, if it’s easier to do that than to use an audio delay.) The piece’s duration is variable: I imagine it could work at any duration between six and twenty minutes. I have made a twelve minute version, but it is only one possible version of the piece: please don’t regard it as definitive. The overall idea of the piece is to set up various repeating patterns and then gradually group the notes so that new melodies grow out of the accents. For example, when you are playing a three-note pattern, if you accent every fourth event, you will get one melody; if you accent every fifth event, you will get a different melody. There are six patterns in Until It Blazes, each an outgrowth of the previous pattern. In each case, you will first want to establish the pattern very softly with no accents at all, and then very gradually begin to stress a grouping that creates a slower melody arcing across the pattern. This accenting happens gradually during a slow overall crescendo, reaches some high point, and then the accenting recedes as you diminuendo. The length of the piece will vary depending on how slowly you want the cross-melodies to build and recede. The most interesting place is where you can hear both the pattern and the melody that cuts across it. Prior to beginning to play the piece, you can say the words: “I have cast fire upon the world, and watch, I am guarding it until it blazes.” This line is attributed to Jesus in the gnostic Gospel of Thomas.”2

“I like John Cage’s definition of experimental music: music about which the outcome is unforeseen, or something like that. I am not interested in writing music if I know how it’s going to turn out before I start writing. That’s work to me. When I start making a piece, I don’t know how it’s going out, but the piece isn’t finished until it’s turned out somehow. So the work doesn’t necessarily reflect the uncertainty and confusion and risk-taking that I went through to make it. If I’ve made the piece well, then the result of my experimental process rather than an illustration of it.”

“Until It Blazes” seems to have some of the characteristics of an open work, not only has it been written to be playable by any melodic instrument whose timbre characteristic includes an acute attack followed by a constant decay, such as the piano, the harp or marimba, but Beglarian makes use of delay aimed not at creating a separate contrapuntal line, but at creating a sonic space where the delay effect promotes a sense of ambient depth and a more subtle sense of syncope. This effect is achieved in part because the echoes created by the effects connected to the instruments are significantly “softer” than an exact, mechanical sound repetition. To give you an idea of ​​the contribution of delay to the composition, it should be borne in mind that the first forty seconds or so of the work are performed as a constant pulse. Furthermore, the delays brought about by the delay do not impose too much rhythmic sense on the musical surface, so as not to interfere with the rhythmic development of the main musical cell. In “Until It Blazes” the final result is not solely determined by the choices made by the composer: it is up to the performer to determine the accent patterns that will produce the crossed melodies, thus making each performance and recording not only a unique version of the work, but defining the final result as a collaboration between performer and composer. Composer and performer find themselves having to make concrete choices, choosing from a constellation of sounds to relate in multiple ways. Their choices break the banal order of tonal probability and establish a certain disorder which, compared to the starting order of classical music, is very high. The introduction of these new organization modules, different and opposite to the old ones, provoke a vast availability of messages, therefore a great information, allowing the organization of new types of discourse, therefore of new meanings. As Umberto Eco wrote in “The Open Work”, here too we have a poetics that proposes the availability of information, and makes this availability a method of construction, a form of narration.

“My pieces often tell stories, and sometimes I get irritated, because like to write something that goes one way, but I can’t do it because it to go another way. So I can’t do what I feel like doing, I have to do the piece is telling me it needs to do. There are tensions that have to be resolved, and that’s where the story is. Actually, that’s what a story is. Underneath the facts and the plot and stuff we call story, the point of narrative is that there are tensions that need to be resolved.”

The Italian musician Sergio Sorrentino thus talks about the Beglarian piece in his book “La Chitarra Elettrica nelle Musica da Concerto”, about her use of technology:

“This creates a very engaging perceptual game, in which the two channels perform precise and complex rhythms. With the delay, multiple dimensions are formed, in which the patterns temporally displaced over different milliseconds live. The first pattern is first presented aseptically and then dynamically developed with a gradual crescendo and metrically varying it and placing the accents in different points of the sentence. This creates ever new melodies, supported by the sonic halo of the stereo delay and the rhythms it generates. The first pattern evolves into the following ones, each time simply characterized by the presence of an extra note. The initial sixth interval is gradually filled by the notes present within it, until it completes an entire descending scale from C to E. Each pattern evolves with the same dynamic and metric variation procedure and then returns to the initial state of rest. The final pattern, after the usual metric play of accents, differs from the others for the presence of distortion in “fade in”. Distortion is gradually added to the pattern until the final explosion, in crescendo, with the saturation of the sound. The final distortion symbolizes the flame of spirituality. “

If the aesthetic value of a work is realized according to the laws of organization internal to the forms, the description of the structures and their possible communicative effects establishes the conditions for the realization of this value. This leaves open a much broader discussion: in every culture, in every historical moment, aesthetic values acquire their own order, at times they acquire a priority or are set aside in the face of more urgent requests for action and commitment. These contingencies, in which the aesthetic value is not questioned or denied as such, decide the success of a work over time.

“I think there are composers who think purely in music, and they may also end up with a set of tensions that get resolved as happens in sto-r. but they’re thinking directly about those musical elements, and I don’t start there. There are composers who are totally engaged with notes and rhythms as notes and rhythms. While I love using those tools—they are my tools, after all—they’re not what inspire me. For me, to write music is to investigate some set of issues that I’m struggling with as a human being, issues that I can only resolve by writing music. What I’m really trying to do is figure out how to live, and playing with notes and rhythms is how I’m working it out.”

In my record archive I found four different interpretations of this piece, three of which were signed by Italian guitarists. Emanuele Forni performed it on his album “Ceci n’est pas une guitare”, released in 2007 by the Italian record company Stradivarius.

In 2008, on his album “The Stroke that Kills” (New World Records), Seth Josel performed it like this:

In 2014 the Italian guitarist Giacomo Fiore proposed it in his self-produced LP “iv: american electric guitars”.

Last edition, made in 2018, by Giacomo Baldelli in his album “Electric Creatures”.

“Until It Blazes” has all the qualities to continue to attract the attention of many musicians: it is interesting to play, it lends itself to an interesting interaction with other media, it can be performed with different instruments and leaves many different open forms for its performance. I’d be very curious to hear a version for chamber music, who knows … “Until It Blazes” was dedicated to Kathy Supové.

1The Composer Eve Beglarian Looks at the Mississippi and Sees a Muse – The New York Times (nytimes.com) https://www.nytimes.com/2009/09/06/arts/music/06shat.html

A journey into Eve Beglarian: Until it Blazes  #playlist on #neuguitars #blog