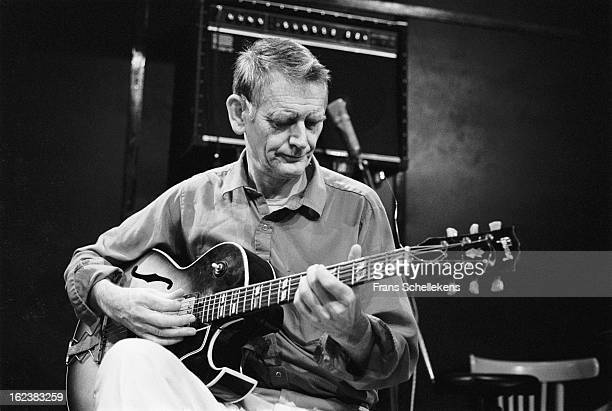 Happy birthday Sir Derek Bailey, today you would have turned 92. The good Emanuele Cinelli, the tireless Emanuele Cinelli kindly asked me to prepare an introduction to the figure of “Saint” Derek Bailey. Not easy, but certainly stimulating for those who, like me, consider themselves a guitar enthusiast. If you look for Bailey on Wikipedia, Italian edition, you will find this lapidary definition “Derek Bailey (Sheffield, 29 gennaio 1930 – Londra, 25 dicembre 2005) è stato un chitarrista e un musicista inglese, padre dell’improvvisazione libera.” Stop. The British version elaborates on adding that “Bailey abandoned conventional performance techniques found in jazz, exploring atonality, noise, and whatever unusual sounds he could produce with the guitar.“ If Zen teaches us that defining means limiting, in this case Wikipedia has reached the maximum of its synthesis capacity, inviting us to deepen a very complex personality. When I think about Bailey, a phrase always comes to mind, an exceptional aphorism from the late Steve Lacy. On p. 193 of Bailey’s book “Improvisation, His Nature and Practice in Music” shows the meeting between the composer/improviser Frederic Rzewski and the American saxophonist. Rzewski asked Lacy to describe in 15 seconds the difference between composition and improvisation and Lacy, point blank, answered him like this “in 15 seconds the difference between composition and improvisation is that in the composition you have all the time you want to decide what to say in 15 seconds, while in improvisation you have fifteen seconds. ” Rzewski pointed out that the answer had lasted exactly fifteen seconds. Things that happen when dealing with a brilliant polemicist.

I think Derek Bailey was an exceptional personality, to put it in Susan Sontag’s style, a man who had the ambition to do alone, what would require the efforts of a whole generation, of an entire sub-culture to be accomplished. Bailey was a guitarist, the guitarist of guitarists, the quintessential guitarist for an army of instrument fetishists, a musician whose playing was marked by such devotion that I think it’s safe to say there is a way to play the guitar. before Bailey and a different way of playing it after him. One thing Bailey had in common with very few other instrument geniuses, personalities like Hendrix, Charlie Christian, John Fahey, Django Reinhard, Fred Frith and very few others. While the record industry desperately tries to create “personalities” that can grab the attention of consumers for the time it takes to make a purchase, Derek Bailey has remained there: a man hunched over his guitar, more important and more interesting than a thousand stars processed and packaged in a marketing laboratory. In an era that records the contempt for instrumental ability, both on the part of corporate neo-liberalism and radical “anti-elitism”, declaring it irrelevant to music production, Bailey makes everything depend on decisions taken in a split second from his fingers and on the strings of his instrument. Although Bailey has developed his own language, beyond the parameters of any previously known technique, his playing is centered around what dexterity and imagination can achieve, without any special software and/or hardware. Still, what he plays is surprisingly more consistent than anything built up in a marketing meeting: Bailey’s music happens in real time. Those who shape cultural life on relationships based on an alleged democratic artistic freedom denigrate Bailey’s “difficult” art, branding it as elitist, as the prerogative of “supermusical”; those who understand culture as interaction, provocation and expansion of consciousness hail Bailey as one of the best stimulants still around. Those who decide to take music, improvisation and an instrument seriously, cannot fail to come to terms with Bailey and what they risk learning, risks destroying their image of the world and reconsidering every fact about twentieth century music, about the artistic significance, about politics and society, and also the concept of what a good record, a good album really is.

Derek Bailey was a guitarist, but also an extremist, a polemicist, a theorist, an enraged and a cunning saboteur of the values ​​of both high and low culture. In terms of commitment, involvement, experience and thought, his art requires dedication, listening and a rigorous approach. Derek Bailey has adopted, as a modus operandi, a real counter-theory: improvisation. Nothing, Bailey argued, is as interesting as improvisation, and nothing is as boring, boring and dead as knowing exactly what’s going to happen, whether it’s listening to computerized electronic music, watching a rock band thunder on stage, or following a symphony orchestra. interpreting the work of some genius from the past. David Grubbs in his beautiful book, “Records Ruins the Landscape” states that the guitar in free improvised music is largely identified with Bailey’s playing. His style is, in fact, something immediately recognizable: a grumpy and radically individualistic vocabulary made up of chromatic dissonances, thorny interjections, rhythmic discontinuities, changing chords embellished by the most improbable and fragile harmonies. From this point of view Bailey is the closest, musically, to a semiologist. His playing contains a repertoire of innovative gestures and signs: the pick that slides slowly along an open string, a quick tap given by an open hand to resonate a harmonic, various percussive sounds played above the nut of the guitar or below its bridge. All stylistic traits that have enriched the vocabulary of numerous guitarists, improvisers and others. If the guitar in free improvisation was a kind of laboratory for developing extensive techniques aimed at redefining and de-constructing the instrument, Bailey’s playing stood out from the others in that it seemed to aim at the de-construction of familiar playing styles. Bailey’s aesthetics represented an extreme case of the autonomy inclination of improvised music. It moved, changed before his style could consolidate itself into a convention, into a definite form.

But what does it mean to create non-idiomatic music? How can one escape from the structures of a musical language? And how can you continue to do so, without ever replicating yourself? Bailey struggled between the grids of a creative process, looking for ways to bring together the rhetoric of an idiom with the musical results of a much more radical form. In the first edition of his book “Improvisation: Its Nature and Practice in Music”, Derek Bailey insisted on the distinction between idiomatic and non-idiomatic improvisation with the following definition, which David Grubbs defines as substantially tautological in nature: “Idiomatic improvisation, much the most widely used, is mainly concerned with the expression of an idiom — such as jazz, flamenco or baroque — and takes its identity and motivation from that idiom. Non-idiomatic improvisation has other concerns and is most usually found in so-called ‘free’ improvisation and, while it can be highly stylized, is not usually tied to representing an idiomatic identity. ” More than a decade later, in the material added to a subsequent edition of Improvisation, Bailey reconsidered this radical distinction. His next conclusion is that the two systems do not differ so much from each other: “Freedom for the improvisor is, like the ultimate idiomatic expression for the idiomatic improvisor, something of a Shangri-la. In practice the focus of both players is probably more on means than ends. All improvisation takes place in relation to the known whether the known is traditional or newly acquired. ” Later, however, the term “non-idiomatic improvisation” was also used as a way to describe a musical practice that was imagined to be devoid of the influences of jazz and new music.

Personally, I have always assimilated Derek Bailey’s philosophy of free improvisation to that of Heraclitus: you can’t bathe twice in the same river. The water changes, you change, everything changes. The first time is always the best because it is unique and all the imitations, the repetitions are only empty simulacra. The real world is concrete, changeable and specific, irreducible to fixed concepts and eternal laws. For Bailey, music was a fabric of concrete utterances, but not attributable to fixed and defined scores and systems: Free Improvisation was the example of a militant dialectic. In a world where we keep repeating the need to “cross borders”, “open the mind”, “break down barriers”, Derek Bailey’s Free Improvisation represented something real, concrete, to bring one’s limits. even further on, to give musicians the opportunity to follow the flow of their consciences, to reach new creative heights. We owe him a lot. Remembering him is a duty we cannot miss.