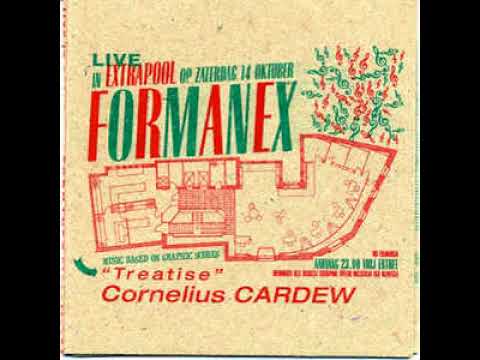 Recorded in Extrapool in 2001 Music based on Treatise, score written by Cornelius Cardew.

The early works of Formanex falls between improvisation and composition, taking graphic elements as a starting point. Two of the members, then student in artschool brought a reflexion towards creating music on the boundaries of visual arts. The influence of electroacoustic music and the visual arts led Formanex to develop spatialisation works, thought of in terms of interventin-performance in a given situation. The cross over of these approaches engaged a radical change to their instrumentation during the first years reheasing together. This change opened up new artistic routes.
Whereby the instrument is central to the musician, but the musician adapts, invents, and rebuilds his instrument according to the needs’ of his musical thought.